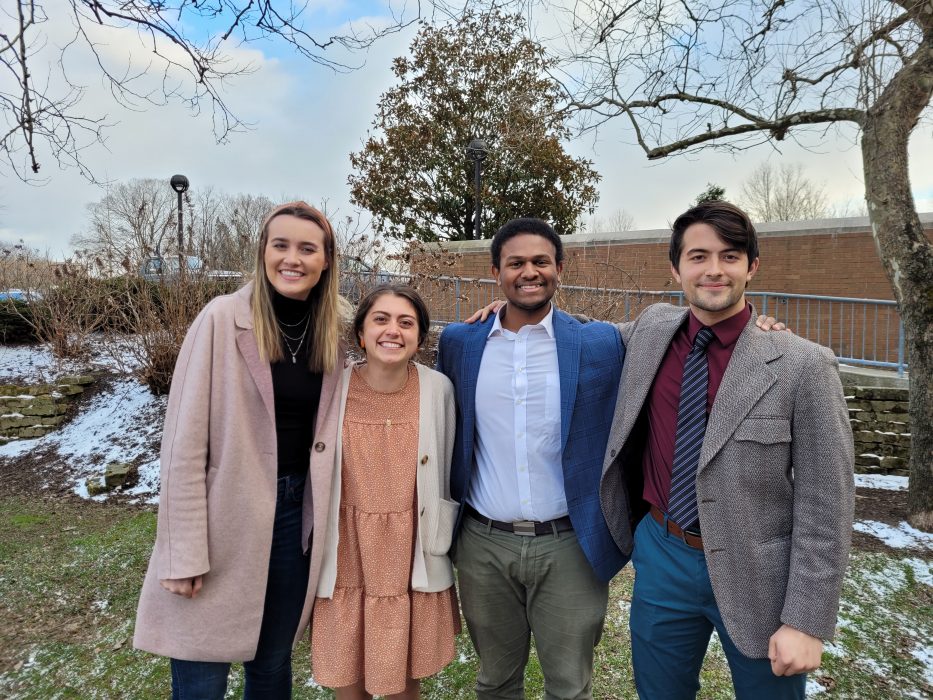 Juniors Amelia Brennan and Jared Johnson are running for president with juniors Noelle Van Horn and Caleb Rider as their respective running mates.

The slogan for Johnson and Rider’s campaign is “Life in Abundance,” which came from Rider.

Rider said they settled on Life in Abundance in part because it was a theme of John’s gospel and really hits on the idea of a Catholic identity.

Both Johnson and Rider said the campaign was bigger than themselves, so they wanted a slogan that wasn’t simply their names.

Brennan said their slogan “Returning to Encounter” was based on a lot of prayer and the story of the prodigal son.

Although you can’t divide all of campus into two groups, she said, a lot of people have similar reasons for coming to Franciscan University of Steubenville, but those groups might not know who the father is.

Both presidential candidates then laid out why they decided to run.

Brennan said she initially considered running last year, but, after hearing a lot from FUSG president senior Alex McKenna and others in student government as well as praying on it, she finally decided to run.

“What I really love is serving our students,” Brennan said. “I just love the people here.”

She said her resolve to run started gradually but suddenly became a reality over Christmas break.

During his time as a senator, Johnson thought a lot about the purpose of student government and, though he had never wanted the position, Sirilla said he would endorse Johnson if he decided to run.

Johnson and Rider have both served as senators beginning in fall 2020 and spring 2021 respectively, although neither are currently on student government.

Rider said that something he learned in student government was initiative.

“If you do want to get something done with student government, you have to take the initiative,” Rider said.

Though neither Brennan nor Van Horn have experience in student government, Brennan assured the student body that they both have the qualities needed.

“The two things that are most important, I think, are a desire to serve and the ability to lead, Brennan said. “And we both have those.”

Brennan said she believed there was value in her and Van Horn’s wide range of experience outside of student government.

“If I want to be a voice for the students and serve the students,” she said, “then I can’t be someone who is like, ‘I haven’t done anything on campus except student government.’”

Many members of her cabinet also do have experience in student government, though Brennan said that wasn’t the main reason they were chosen.

“That’s a bonus,’” she said, “but primarily it was through high recommendation.”

Every time they were searching for people, Brennan said, God dropped someone in their path.

They were “almost divinely appointed,” she laughed.

Discussing their cabinet, Rider said that they were looking for the ability to reach out to students.

“Obviously there are existing friendships, but we wanted to try to have a broad reach to campus,” Rider said.

They agreed that their cabinet members all share the same values and vision for campus.

Johnson said that building unity and strengthening Catholic culture were the biggest goals of their campaign. He hopes to fulfill these goals through events.

Johnson said that many events on campus boil down to a few questions.

Johnson said he wanted to move away from that mentality and be more intentional in celebration.

On their goal of advocacy, Johnson joked about the purpose of student government.

“It can throw money at things and talk to people,” he said. “What we can’t throw money at, we can at least connect you to the right people (in the administration).”

Brennan laid out her three campaign goals and said that preparing students for life after Franciscan is both her favorite and the backbone of their campaign.

“(Students) want to see that we’re going to change the caf food,” Brennan said. “What really matters … is not what we have … but our interior, ‘how are we doing?’”

Brennan said one of their goals is to make spiritual direction available for all students.

“It doesn’t even have to be high-scale,” she said. “Just smaller things, just to teach people how to discern well.”

Regarding her rival candidates, Brennan said Johnson and Rider are good at being present and interacting with people.

“They’re really good at making their presence known at events and being very present and promoting things already to show (they) care,” she said. “I respect them, and they are awesome.”

“The people I know on their cabinet (are)… really good people,” she said.

Rider knew immediately what he liked about the other campaign.

“They certainly got better photos than us,” he exclaimed.

Rider congratulated Brennan and Van Horn on connecting with the existing student government, both in meetings and in their cabinet members, and offered the campaign some constructive criticism.

Johnson said both campaigns have very good ideas and that he is excited to work with Brennan and Van Horn regardless of who wins, a sentiment that Brennan also echoed.