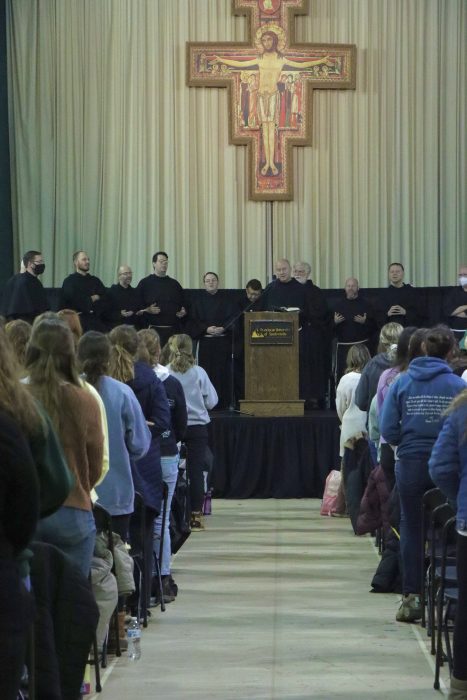 The Rev. Dave Pivonka, TOR, university president, said he, along with the other friars, hosted the night to show their appreciation for the students and to express a desire for their growth in holiness.

“The greatest thing that we as friars are going to do is foster your relationship with Christ,” Pivonka said. “If you graduate and all you get from Franciscan University is a degree, I suggest that we as a staff have failed.”

Pivonka said personal relationship with the Lord is important.

“If the only reason you’re having a spiritual life … is because people around you are making you do it, ultimately, you’re going to struggle when you leave the university,” he said.

Pivonka outlined some recent changes at the university, which is celebrating its 75th anniversary over the next year with various events.

The campus is under construction for a new nursing, engineering and business academic building that will be named Christ the Teacher, Pivonka said.

“The next two years on campus, it’s going to be a mess,” he said. “But that’s part of the blessing of having a university that’s growing.”

$67 million have already been raised, he said.

Three friars spoke at both sessions on the themes of relationships, spiritual life and sacramental life.

“Part of the experience (at Franciscan) is to help people here to be built up so they can be sent out,” he said. “Are the people that we’re spending time with … people who are there to build us up?”

Corona also gave advice on dating. He said the women should expect men to be straightforward and called on the men to be clear with their intentions.

The Rev. Shawn Roberson, TOR, said relationship with God means he is always present, even if a person doesn’t feel it.

“We have a religion that says God loves each of us where we are,” he said. “The Lord speaks the language of empowerment.”

“They’re not rushed, they’re not about instant gratification or on-demand, and they can be very subtle,” he said. “You can feel and experience outwardly and be completely and totally transformed.”

St. Andre said the messy construction of campus can be compared to spiritual life.

“There’s holes and there’s mud and there’s rocks and there’s detours,” he said. “It’s not a bad thing. It means God is working. Something is in progress in you.”

Preceding both sessions, cookies and hot chocolate were provided.