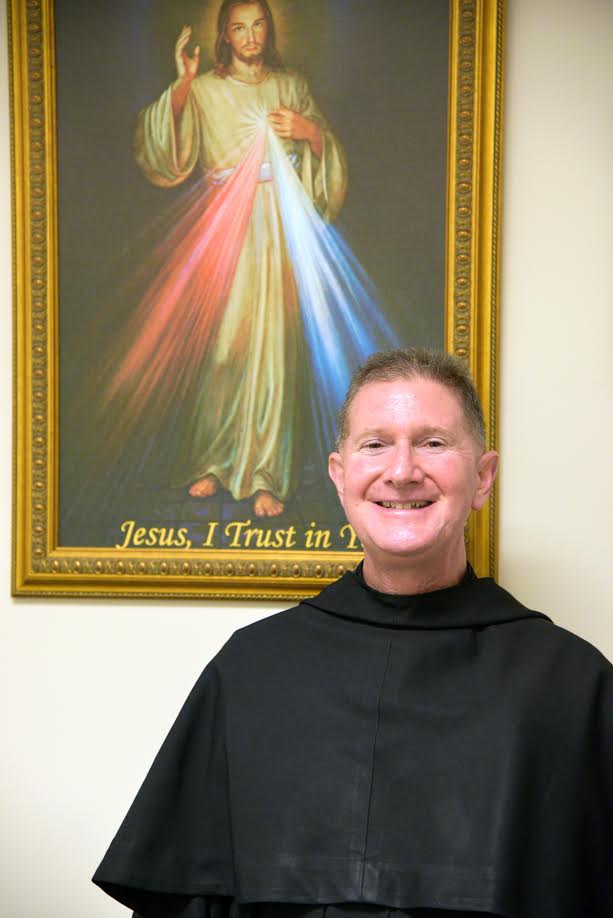 He smiled and leaned back in his chair before he moved to answer the question, when asked the secret to his happiness. “You want to know the secret? Life is such a gift,” said the Rev. Nathan Malavolti, T.O.R.

Malavolti, vice president of Pastoral Care and Evangelization, said his mission is to “reflect the Father to every member of this university family.” His daily list of obligations allows him the opportunity to do just that.

A deliberate understatement given the heavy workload that comes with his title, as six independent on-campus ministries report to his office, in a synchronized effort that allows for the formulation of team spirit.

After an long period of teaching chemistry at Franciscan University, Malavolti was asked by the Rev. Sean Sheridan, T.O.R. to adjourn his academic role and assume a pastoral position.

“When you’re in religious life, you obey, and you ask what the community needs of you,” said Malavolti.

The constant ringing of his desk phone and the written thoughts which cover his office whiteboard both evidence his important role at the university, one which Malavolti said required a period of adjustment.

Malovolti said his outlook on life is based upon offering it all up for God.

“Nothing for vanity; everything for His greater glory,” said Malavolti

Malavolti said family difficulty and the pastoral guidance of an elder priest are both justifications for his positive outlook on life. “I want to be one of those priests that thinks life is beautiful,” he said.

Franciscan University students would agree wholeheartedly that Malavolti has more than achieved his goal. Campus-wide, the priest’s infectious smile is a herald of happiness.

Malavolti said he strives for nothing less than the unceasing emulation of joy.

“What makes me smile is how much my God loves me,” said Malavolti.

Malavolti said the warrant for his joy is forever rooted in God’s unending mercy.

“I’ve made a lot of mistakes in my life, but he pours out that mercy,” said Malavolti. “His mercies are new every morning. He gives me another day, to hopefully reflect his love.”

The friar begins each new day with an earnest prayer that God will allow his actions to shine the love of the Father to all he sees.

Malavolti said his special connection to the university dates back to his discernment days.

“I came here in 1989, already trained as a chemist,” said Malavolti. “I found a wonderful atmosphere here.”

He added, “Every area seemed to point to Jesus. I feel so blessed to be back.”

Twenty-eight years later, Malavolti still rejoices that love is his chief vocation. Malavolti said he claims the university enthusiasm as a main source of his own joy.

“Everyone I work with is excited about the mission of building up God’s Church: so many people, across the board sold out on mission,” said Malavolti.

When the friar of hope isn’t walking the university grounds armed with a smile, he enjoys the benefits of athletics, as both spectator and athlete. The University of Illinois alum is an avid supporter of the Fighting Illini, especially on the basketball court come March.

When Malavolti takes the court himself, he prefers tennis. He spoke fondly of the times when the Rev. Michael Scanlan, T.O.R. and the Rev. Sam Tiesi, T.O.R. would trade administrative work for the chance to compete.

“Father Mike and Father Sam played tennis, intensely,” said Malavolti.“They could be men on fire with love of God and also enjoy leisure.”

Malavolti said the example Scanlan set is one he aims to keep alive, specifically his obedience to the Spirit, and his courage to do what’s right. Malavolti believes it is crucial to the future of Franciscan University.

“Father Mike stuck to what he knew the Lord wanted,” said Malavolti. “He had a way of inspiring people.”

Malavolti said he has come a long way since his youth; as a child, the future friar would raise up to 1,000 chickens at a time on his family farm, passing the time with housework and the occasional Gilligan’s Island episode.

Malavolti said he needed only his mother’s fried chicken and mashed potatoes, still his favorite meal, in order to call the day a good one. Through the years, his setting, his title, and his expectations have shifted, but his outlook has not.

“I want to reflect the Father,” said Malavolti. His mantra is a simple one: “Let Christ be seen in your eyes, heard in your words, and witnessed in your actions.”

Malavolti said,“I had a phase in my life where I wanted to be called Dr. Malavolti.”

Now, the friar asks only to be known as “a loving Father.”

True to form, his message to students is simple, transformative and succinct: “Shine Christ. Jesus is alive in you,” said Malavolti.

2017-02-03
Previous Post: Hundreds of Franciscan students join the March for Life
Next Post: Lady Barons fall to Mount Aloysius College, despite improvements to the team