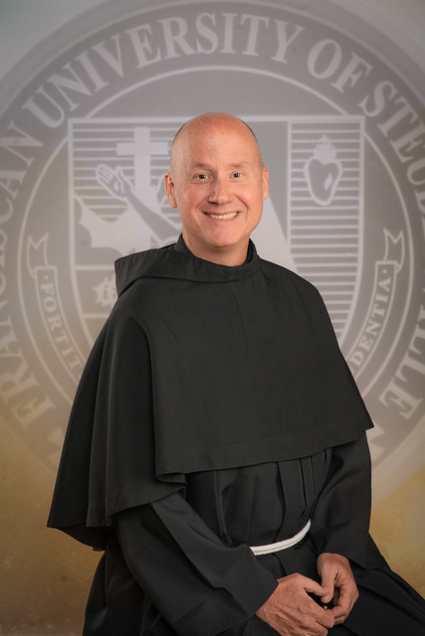 STEUBENVILLE, OHIO—In a unanimous decision, the Board of Trustees of Franciscan University of Steubenville elected Father David Pivonka, TOR, as the school’s seventh president on May 21. He succeeds Father Sean O. Sheridan, TOR, who has served as president since 2013.

“I congratulate Father David Pivonka, TOR, ’89 on his election to the presidency of Franciscan University. As Franciscan’s first alumnus president, he brings a unique array of perspective, experience, and qualifications to this role. His work as a nationally known preacher and evangelist combined with prior senior-level administrative experience at Franciscan will serve the University well. I assure Father Dave of the support and prayers of his Franciscan brothers in the Province of the Most Sacred Heart of Jesus as he assumes his new duties,” said Father Malachi Van Tassell, TOR, ’93, chairman of the Board of Trustees and minister provincial of the Most Sacred Heart of Jesus Province of the Third Order Regular of St. Francis of Penance.

Describing the search process, David DeWolf ’96, vice chair of the Board of Trustees and chair of the board’s Governance Committee, said the entire board was resolved “to find a president who was led by the Holy Spirit, a champion for dynamic orthodoxy, and an exceptionally strong executive who understands and values the unique culture and demands of academia and the importance of strong collaboration between the president and the faculty.

“After significant prayer and a robust interview process, it quickly became clear that Father Dave Pivonka possesses all of these qualities as well as meeting all the requirements of our job specification,” DeWolf said. “We are confident God has prepared him well to lead Franciscan, and we are excited about his presidency and what it means for the future of the University—a future full of hope.”

For the last seven years, Father Pivonka served as the director of Franciscan Pathways, an evangelistic outreach of his Franciscan, TOR, community. In that role, he has hosted and produced The Wild Goose video series on developing a deeper relationship with the Holy Spirit, a documentary on St. Francis of Assisi titled Sign of Contradiction, and Metanoia, a new series on conversion that will be released later this year. Father Pivonka preaches at approximately 50 events annually, including retreats, workshops, pilgrimages, parish missions, and Franciscan University’s youth, young adult, and adult conferences.

At Franciscan University, Father Pivonka held a number of pastoral, leadership, and administrative positions from 1996-2008, which gives him a broad understanding of University operations and evangelistic outreach. He also served on the faculty as an adjunct professor of theology (1996-1998).

Father Pivonka worked as vice president for Mission and Planning (2003-2005), serving on the President’s Cabinet, leading a team of faculty, staff, and students in strategic plan development, and building mission awareness on campus and off. In addition, Father Pivonka served as director of Household Support (1996-1998), assistant to the president under Father Michael Scanlan, TOR, (1998-1999), director of Youth Outreach Conferences (1999-2003), and director of the Study Abroad Program in Austria (2005-2008).

From 2008-2012, Father Pivonka served as director of Post-Novitiate Formation for the Franciscans, TOR, in Washington, D.C., forming student friars in their spiritual, educational, and psychological development.

Father Pivonka continued, “I look forward to working with one of the finest faculties in the country and an exceptional staff to assure that our Franciscan University graduates are prepared intellectually, professionally, and spiritually to be a light to a world in desperate need.”

Father Pivonka, born in Durango, Colorado, graduated with his BA in theology from Franciscan University in 1989 and went on to earn an MDiv and MA in theology from the Washington Theological Union in 1996, writing his MA thesis on the indissolubility of Christian marriage. He earned a doctorate in education from the Graduate Theological Foundation in 2005, with a doctoral project focused on Catholic education in a post-modern world. He also earned an executive juris doctorate from Concord University School of Law of Purdue University Global in 2011.

A solemnly professed member of the Franciscans, TOR, Province of the Most Sacred Heart of Jesus, Father Pivonka was ordained to the priesthood in 1996.

He has written six books, the two newest being Breath of God: Living a Life Led by the Holy Spirit (Ave Maria Press, 2016) and Sign of Contradiction (4PM Media, 2018).

Since 2008, he has served on the board of Renewal Ministries, and he is a past member of the Board of Trustees for Saint Francis University (2000-2012) and a past board member for the National Service Committee.

Father Pivonka will assume the duties of president effective immediately, and he will be formally installed as the president during an inauguration ceremony that will be held later this year. For more information, photos, and videos featuring Father Pivonka, visit https://www.franciscan.edu/fatherdavidpivonkator/.

Franciscan University of Steubenville, founded in 1946 by friars of the Most Sacred Heart of Jesus Province of the Third Order Regular of St. Francis of Penance, integrates excellent academic programs with a dynamic faith environment to serve 2,400 students from all 50 states and 12 countries on campus and an additional 600-plus students online. Franciscan offers over 70 programs of study including over 40 undergraduate majors and 9 graduate programs, and it has ranked in the elite “top tier” of Midwest universities in U.S. News & World Report’s guidebook, “America’s Best Colleges” since 1998. It is also on Forbes’ select list of America’s Top Colleges, Kiplinger’s Top 100 Best Values in Private Universities (since 2011), MONEY Magazine’s Best Colleges, and each edition of the Cardinal Newman Society’s Guide to Choosing a Catholic College.