Franciscan students partake in hopeful March for Life despite setbacks 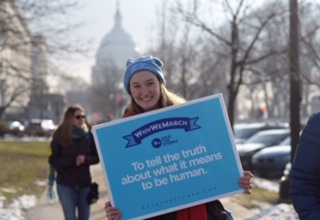 On the afternoon of Jan. 18, over 500 Franciscan University of Steubenville students marched down Constitution Avenue towards the Supreme Court building in Washington, D.C., in a united stance against abortion. The students displayed the gentle and loving nature of the March for Life through a prayerful and peaceful presence.

Franciscan students’ participation in the 46th annual March for Life included attending morning Mass at the Basilica of the National Shrine of the Immaculate Conception, a rally on the lawn of the National Mall and the march itself, which ended at the Supreme Court building.

“This is a movement founded on love and grounded in the nobility and dignity of every human life,” said Trump. In his video message, Trump promised that he would defend the first amendment right to life in the Declaration of Independence by vetoing any bills threatening the life of an unborn child.

Congressman Chris Smith of New Jersey also spoke at the rally, thanking President Trump for his message and assuring him that 169 house members and 49 senators have pledged in writing to sustain the president’s veto.

While this message from the president and congressman is promising, Franciscan University Student Government’s President Gabe Gessler urges students to “take this promise with a grain of salt” because there is much more that can be done by the Republican Party as a whole in support of the pro-life movement.

The march itself went smoothly in spite of foreboding weather predictions and had a very successful attendance of approximately 200,000-300,000 pro-lifers. Although weather proved not to be problematic, Franciscan students struggled to arrive in Washington, D.C., due to flat tires and heater malfunctions on several of the buses.

One bus was even delayed until 4 a.m. while the others departed at midnight. Junior social work major Dominique Cognetti, who organized Franciscan’s expedition to the nation’s capital, was thankful for the safe arrival of the students. “It is an incredible blessing that neither the bus malfunctions nor the government shutdown deterred the march,” she said.

This year marks the 46th anniversary of the first March for Life. “It is important to show up to the March for Life each year to stir our own conscience,” said the Rev. Matthew Russick, TOR. “We can do so much more, and being here is a reminder of what more we can and should do.”