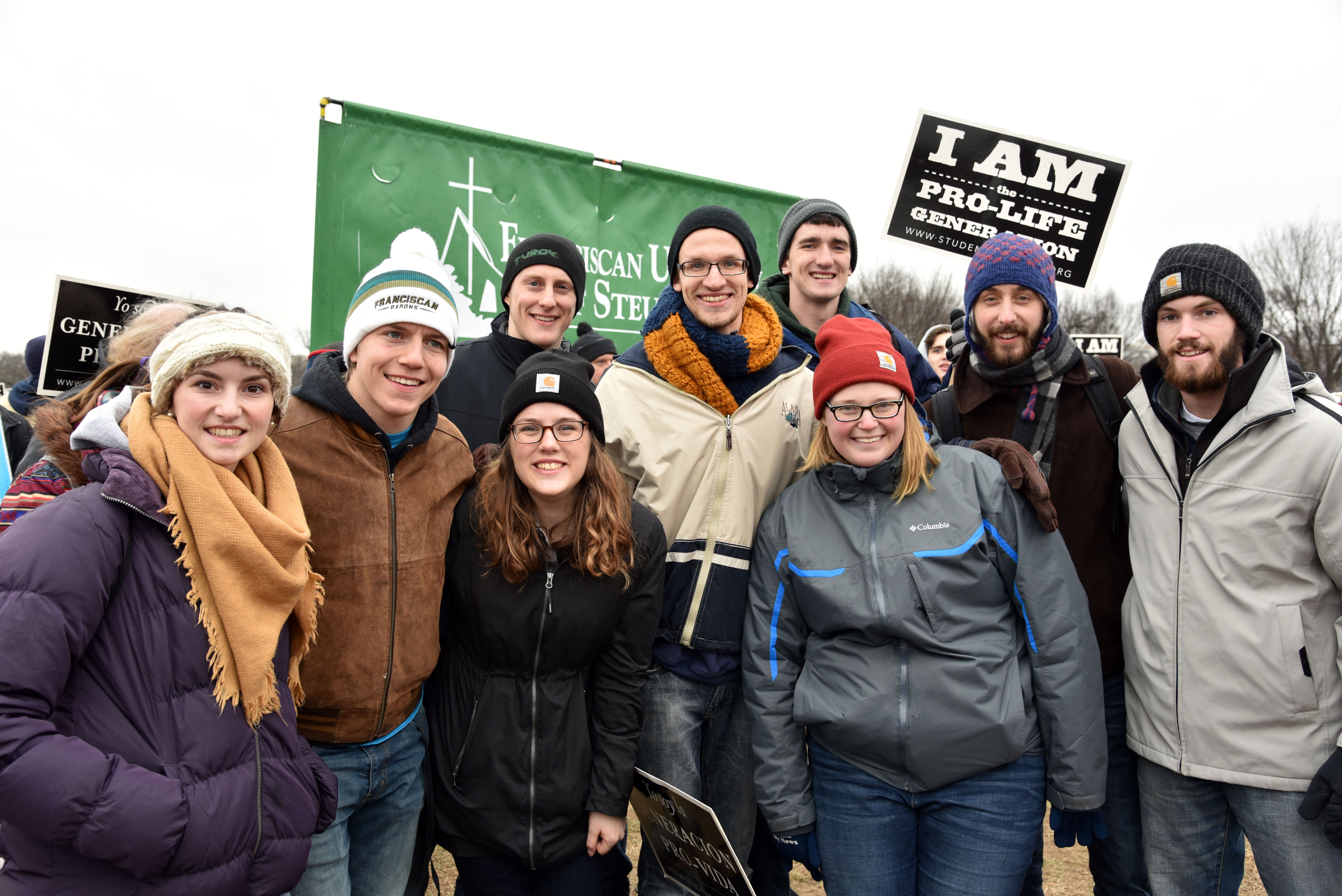 Like every other year, hundreds of Franciscan University students made the journey to the March for Life on Jan. 22 in Washington, D.C.

Unlike previous journeys, this year’s eight busloads of students were trapped in the snow on the Pennsylvania Turnpike for 32 hours on the way back to campus.

In spite of forecasted winter storm Jonas looming on the horizon, Franciscan students boarded buses on Thursday night headed to the March for Life.

Students, faculty and friars rode through the night to arrive in Washington, D.C.  They reached the Basilica of the National Shrine of the Immaculate Conception at 6:30 a.m. Friday to attend a 7:30 a.m. Mass celebrated by the Most Rev. David A. Zubik, bishop of Pittsburgh.

Zubik delivered a homily on sacrifice during this Mass, which was the closing liturgy for the National Prayer Vigil for Life.

“If the object of your sacrifice isn’t God, it’s not a sacrifice,” said Zubik.

Following Mass, students took the Metro to reach the National Mall where the March for Life would begin. As the winter storm rolled in, trains began to close near their stops at the Washington Monument.

The crowd that filled the monument grounds was sparse in comparison to previous years yet still massive considering the impending blizzard.

“So many schools and parishes are canceling; I’m excited to see who shows up,” said Franciscan sophomore Megan Salzano said, prior to the march.

Regarding attendance of the march in spite of the blizzard, junior Jenny Sullivan told the Catholic Herald, “I don’t think the school ever doubted coming.”

Prior to the march, participants were motivated and inspired at a rally by a variety of speakers, including Republican presidential candidate Carly Fiorina and former NFL Baltimore Ravens center Matt Birk.

“I’m honored to be here this chilly afternoon with so many advocates for life. Although I have to tell you, it’s warmer than Iowa or New Hampshire,” said Fiorina.

Throughout the rally, participants said that they could see the connection between the March for Life and the liturgical Jubilee Year of Mercy.

Joel Patchen, the founder of pro-life organization Anna’s Choice, said, “Mercy to the least of these in the womb is what Christianity is all about.”

“People who are pro-choice tend to be defensive, and mercy diffuses this defensiveness with the possibility of forgiveness,” he said.

The theme for the march was “Pro-life and pro-woman go hand-in-hand,” refuting the common conception that opposing abortion is tantamount to wanting to take away women’s rights.

Students said they were proud to be at the march as a visible symbol of their convictions.

“It’s getting harder and harder for the media to ignore,” said junior Ginny Bender. “It feels like you aren’t doing anything, but you are.”

Freshman Rachel Hamilton said, “We want to communicate the goodness and joy in life by our joy in marching.”

Snow began to fall as the march began at 1 p.m.

As the group walked, students recited rosaries and chanted.

“We pray that those who are contemplating abortion instead contemplate you,” said Bob Siemens, who is the director of the Office of Evangelization and who chaperoned the trip.

When the marchers reached the Supreme Court building, snow was falling rapidly.

Franciscan students hurried to Union Station to board buses home. By 4:30 p.m., they were rolling back to Ohio.

Traffic moved slowly as the snow piled up. At 11:30 p.m., the buses stopped completely due to traffic on the Pennsylvania Turnpike. Little did people know that no one would move again for another 32 hours.

Students handled the delay with grace and optimism. They brushed their teeth in the snow and threw snowballs. They endured long periods of sitting in cramped seats. Some were generous in sharing their food, even making sure to offer it to people on other buses.

Students prayed rosaries, Divine Mercy Chaplets and the Liturgy of the Hours together, understanding that their time on the bus was merely a continuation of their pilgrimage in the defense of life.

The Rev. Daniel Pattee, TOR’s words on the power of prayer rang true.

“The most important aspect of the march is sacrificial prayer,” he had said during the rally.

Freshman Joseph Palmer, bus captain of one of the Franciscan buses, spoke of the importance of everyone’s sacrifice.

“The more harsh the weather is, the greater the witness to those who oppose us,” he said.

The National Guard arrived and worked to rescue those stranded on the turnpike.

At midnight Saturday – more than 24 hours after the buses had stopped – military police arrived with bottles of water, MREs (Meals Ready to Eat) and Subway sandwiches. Students helped by running on the unplowed road to pick up boxes of food that were being handed over the highway barrier.

“As frustrating as this can be, I still would do it all over again for the March for Life. So for all those people out there who think none of the pro-life generation cares, look at those of us out here stuck on the turnpike. We care,” wrote freshman Gaby Taylor, a member of Franciscan’s Students for Life, on Facebook.

Sophomore Alicia Paddock, also a member of Students for Life, said, “My favorite part of the march, I would have to say, has been getting stuck in the snow. …This is actually really fun, just being able to be with everyone, get to know the bus driver, help out and just get to talk with everyone. It’s been an adventure.”

The Anderson Coach bus drivers were incredibly patient and cheerful throughout the ordeal.

Students arrived back on the Franciscan campus by 1:15 p.m. Sunday, having spent a total of 44 hours on the road.

“I’ll come next year if there’s not a blizzard,” said junior David Farrell.