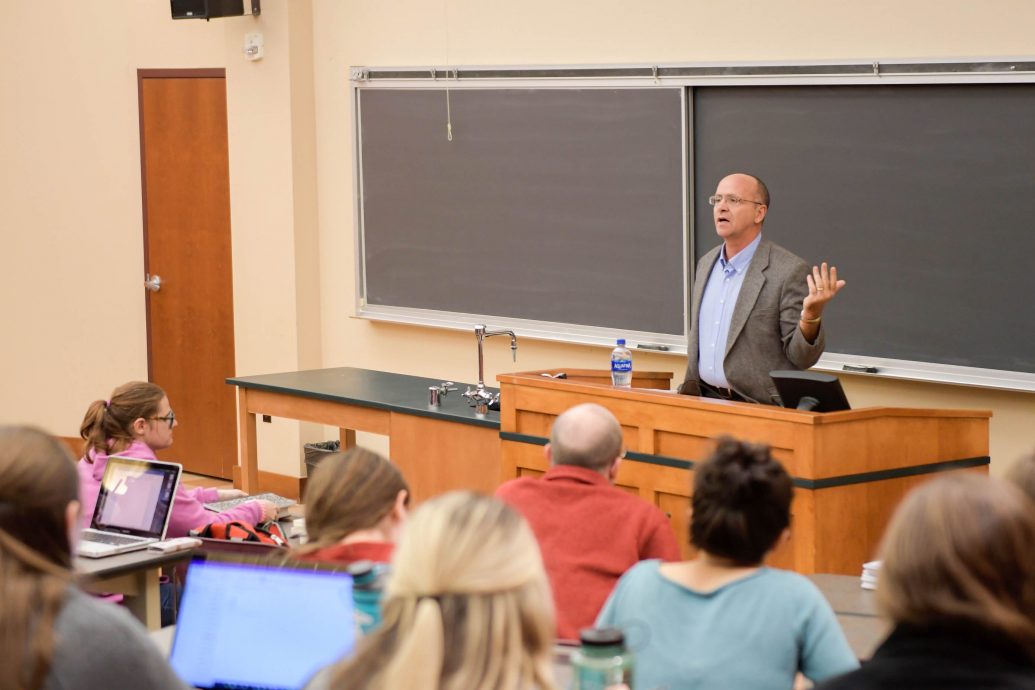 In his lecture entitled “Peace through the Storm,” Miravalle, who holds a doctorate in theology, sought to educate students on current Church issues and reflect on how the Church can move forward in this trying time. In his own words, Miravalle readily admitted that “this is not a fun topic, it’s a difficult topic.”

To begin the evening, Miravalle spoke of the utmost importance of clinging to the Blessed Mother in times of trial. The theology professor explained that Mary, as an unwed young mother who later watched her son die a criminal’s death, “endured all scandal for the love of Christ.” In turn, Miravalle encouraged the students present to embrace the same mentality, turning to the “Mother of Scandal,” as the professor described Our Lady.

Continuing his lecture, Miravalle touched on some of the key points of the current issues of the clerical sex abuse scandal. “This is not going away,” said Miravalle. “If we do not identify the problem, more kids will suffer.”

Encouraging the listeners to remain faithful to the Holy Father and do whatever they can to preserve Church unity, he said, “We never want to entertain schism.”

To conclude his lecture, Miravalle exhorted those present to a renewed devotion to adoration and the rosary, saying, “We simply have to pray more.” The theology professor also stressed the importance of self-examination, saying in regard to the whole Church, “If we’re an examination of conscience, we should do it for us all.” Following the conclusion of his presentation, Miravalle was greeted by questions and discussion from the students in attendance.

This talk was a part of a series of Thursday evening “Theology Live” lectures given by Miravalle. The lectures present a variety of theological topics throughout the semester.

Miravalle will present his next lecture on Nov. 29 in the Pugilese Auditorium on the topic of different forms of prayer, in anticipation for the Advent season.