Franciscan friar turns to the clearer airs of Washington, D.C. 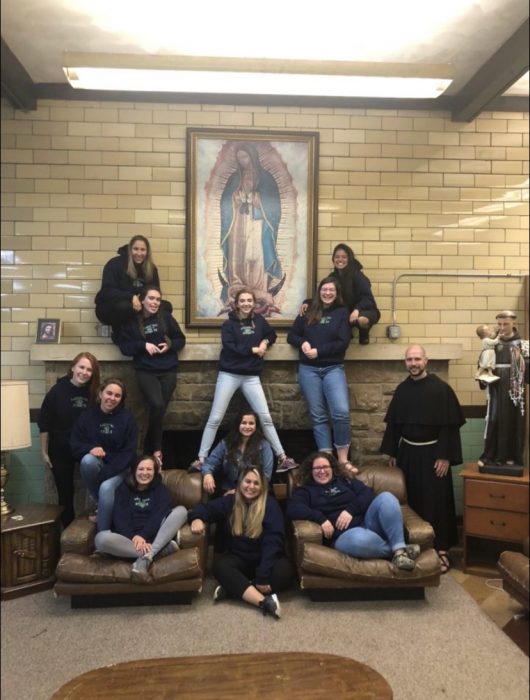 Following this semester, the Rev. Vincent Yeager, TOR, is departing Franciscan University of Steubenville to minister in the cleaner airs of Washington, D.C. His departure reminds students to reflect on the blessings received from all the friars who minister on campus.

Yeager has spent the last two years as a priest at Franciscan University, which is about four-fifths of his ordained life. The school may be more of a home to him than it is to anyone.

However, Yeager understands and reaffirms his vow of obedience.

“Sometimes unexpected things happen,” he said. “Due to some needs to take care of our men in formation, (our provincial) asked if I would be willing to take over as postulant director.”

Yeager will be taking on this duty, as well as retaining his current role of vocations director, in the friars’ House of Studies in D.C.

Smiling back on his pleasant time in the university community, Yeager shared two main lessons he learned over the past two years.

The first, which is a lesson that can be applied to every day, especially in the busy life of a college student, is the necessity of discerning between goods.

“It’s all good,” he said in reference to the many beneficial and holy opportunities one can find at Franciscan University. “But if we say yes to everything, we end up completely depleted and have nothing to give.”

As in any discernment, discerning between goods takes much prayer and discussion. But Yeager was able to understand his boundaries and contrive a realistic and refreshing schedule.

“In doing so, I’m actually more free to serve the Lord,” he said.

He gave two guidelines that he discovered in this discernment of goods.

“The Sabbath is of utmost necessity,” Yeager said. “In fact, it’s one of the commandments. It has a moral quality to it, it’s not just a self-care thing.”

Second “is making sure (you) get enough sleep, but prayer cannot be sacrificed,” Yeager said.

Next, Yeager shared a life lesson he learned in his time on campus and as a priest in general.

“Ministry can be very fulfilling, very up-building; but it can’t be the core of where I find my sense of identity and peace. It has to be deeper than that. Because, at one point in my life, I won’t be able to do ministry.”

Once your life’s foundation is in God, he said, the ministry you do will stem from that relationship.

Another aspect of ministry that was brought to light for Yeager was the ability to have fun with it. He greatly enjoyed playing sand volleyball and connecting with people around campus in a casual way.

“It’s not formal ministry per se, but it’s incredibly life giving,” he said.

Yeager said he is excited to continue his ministry in formal and informal ways in the House of Studies, especially by the formation of the postulants through the sacraments. He is excited to walk with those in the second step of discerning priesthood and “helping them to grow, helping them to discern: is this where God’s calling you?”

Finally, Yeager shared some last words of inspiration, saying not to “get stuck in our heads. … It really ultimately comes down to (this): do I love the Lord, and can I get my responsibilities taken care of?”

Yeager, who will be joined in his departure by the Rev. Matt Russick, TOR, will be sorely missed on campus. However, they leave behind many memories, prayers, spiritual graces and words of wisdom that can draw the university even closer to the God who first brought the community together.