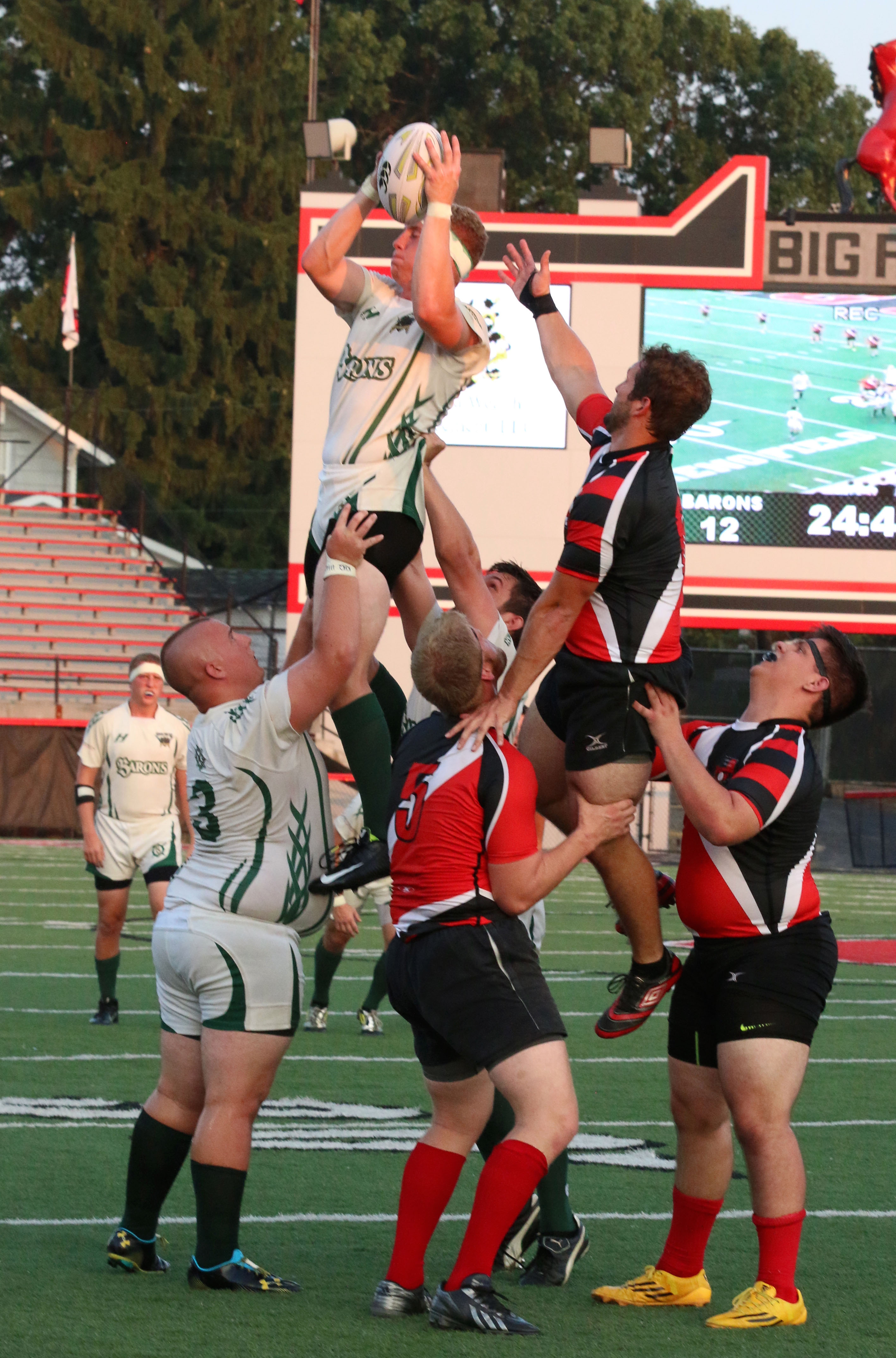 Play started at 7:01 p.m. with Franciscan’s Sebastien de Luxembourg kicking the ball to the Wolverines. The Barons quickly jumped into the lead when junior Kevin Arkoosh scored a try under two minutes into the game, bringing the score to 5-0.

photo by: Grace Duffey
Franciscan’s Lucas Borden catches the ball while being lifted during a line-out on Sunday night during Rugby Ruckus.

“Our packs have been working really hard,” said Head Coach Chris Courtnell. “There’s a core group of them that have been working over the summer and it’s really started to show. We build a lot of our plays off of our dominant pack.”

As the first half progressed, the Barons asserted their dominance in set pieces with sophomore James Weiss leading the way with his strong physical play.

The Barons’ physicality wore down the Wolverines, a smaller team, and the tries started to come. Eight minutes into the game sophomore Isaac Sanford scored his first career try extending the Barons’ lead. Nine minutes later the Barons extended the lead with a try from junior Jeffrey Baldwin.

After a penalty near the 17-minute mark, de Luxembourg scored a successful conversion adding another three points.

With nine minutes left in the half, senior Ian Miller got his share of the score total, extending the lead to 27-0.

photo by: Grace Duffey
Franciscan students throw baby powder into the air shouting “I believe that we will win!” during the Rugby Ruckus on Sunday evening.

Just before halftime the Barons scored once more through Baldwin’s second try of the game leaving the score at 34-0.

Nothing changed in the second half with the Barons continuing to dominate the Wolverines. After 13 minutes of play the Barons earned another try and seven minutes after that sophomore Paul Deschler scored his first try bringing the score to 48-0.

After a penalty near the 9-minute mark, the Wolverines scored a successful conversion bringing the score to 48-3.

To end the game when Miller scored his second try with six minutes left leading to a final score of 55-3.

Due to the overwhelming victory, Courtnell said that he was very pleased with the overall performance.

“Grove City always brings out some big guys so we knew we had to get control of the game quickly,” said Courtnell. “Excellent play from everyone tonight.”

The Barons’ next game is September 12 at home against Robert Morris at 1 p.m.