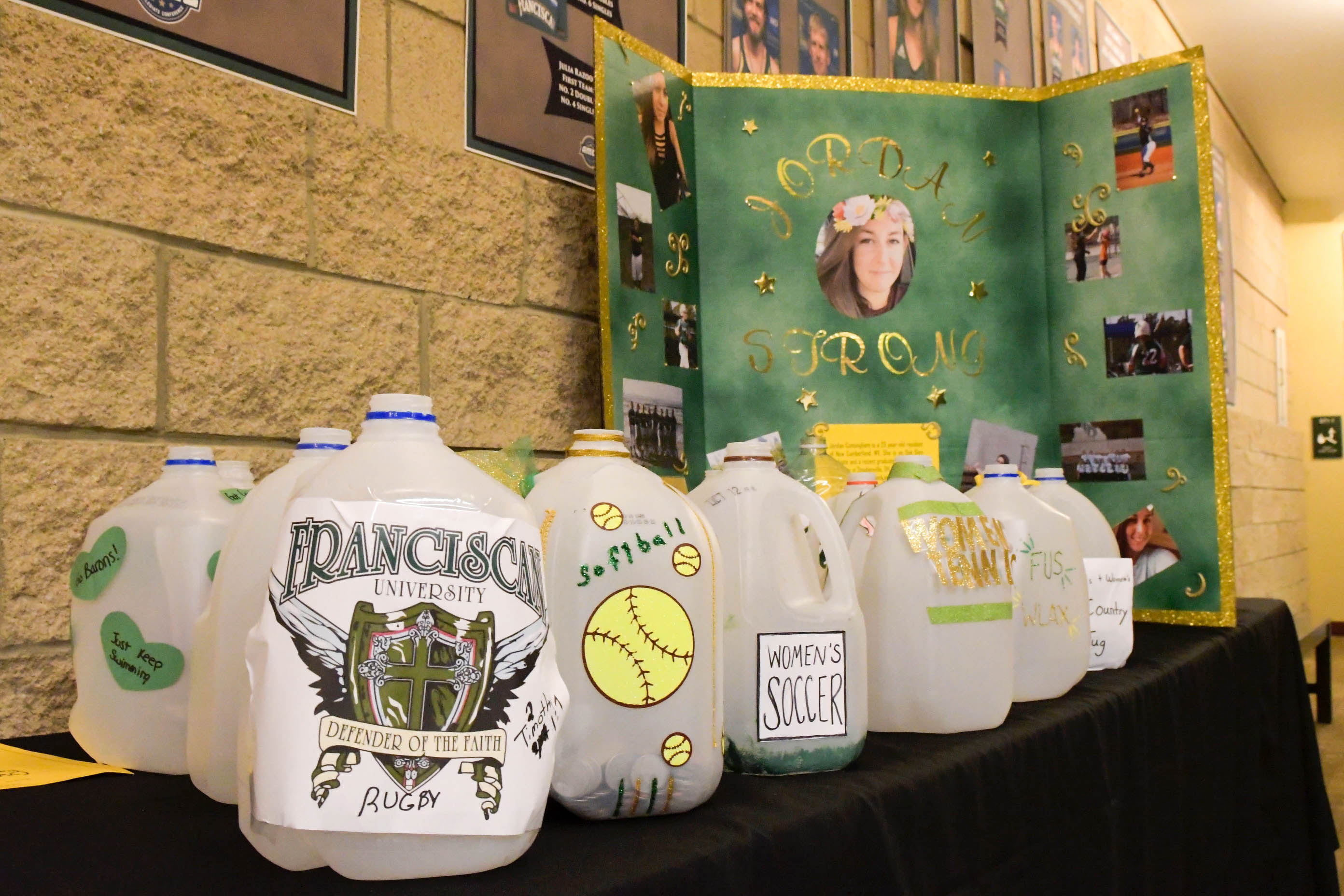 The Baron athletic teams have come together to raise money with the Franciscan Athletics coin war fundraiser to assist former Franciscan softball player Jordan Cunningham with medical expenses after her devastating injuries in an ATV accident.

On Sept. 14, Cunningham, an alumna of Franciscan University of Steubenville and an exceptional pitcher for the Lady Barons’ softball team, was involved in a terrible ATV accident which left her seriously injured and paralyzed, and she had to be helicoptered out to UPMC Presbyterian Hospital in Pittsburgh to receive medical attention.

This tragedy left Cunningham with massive medical expenses. However, the Franciscan Student-Athletes Advisory Committee stepped up to organize a fundraiser to help with some of her medical bills in this difficult time.

The athletic teams were each given a milk jug to put out on a table in the Finnegan Fieldhouse to collect money for the cause. Any coins put into the jugs count as positive points for that team, while any bills put into a jug count as negative points for said team.

So far, the softball team’s jug is in the lead due to tremendous support from Cunningham’s former teammates and other generous members of the Franciscan University family. This was a testimony to the impact that Cunningham had on her team and those around her.

“Jordan was one of the first players that I ever recruited here,” said head softball coach James Walker. “When she graduated, she was the winningest pitcher in school history. She actually did a lot for our program.  When she came here, she really helped to start turning the program into what we’ve built as of now, and she was pretty instrumental for us.”

“She has a long road ahead of her,” said Walker.  “She is paralyzed from her armpits down, so she is going to be having months and months of rehabilitation. Because of this she is not working, and I’m not sure how great her insurance was, so anything that we can do as a family is going to be pretty instrumental in getting her back into a functioning type of life. Jordan is an amazing person. When she came to Franciscan, she did not really have a faith background so she was able to grow a lot as a person here. Hopefully what we can do (with the coin wars fundraiser) can help her and her family a little bit.”

The Franciscan Athletics coin war will continue through Monday, Oct. 29. Students are encouraged to support Cunningham and root for their favorite teams by placing coins or bills in the milk jugs in the fieldhouse.

2018-10-14
Previous Post: Austria Adventures: Out of the ashes we grow
Next Post: 54-day novena begins at Franciscan University for intentions of students