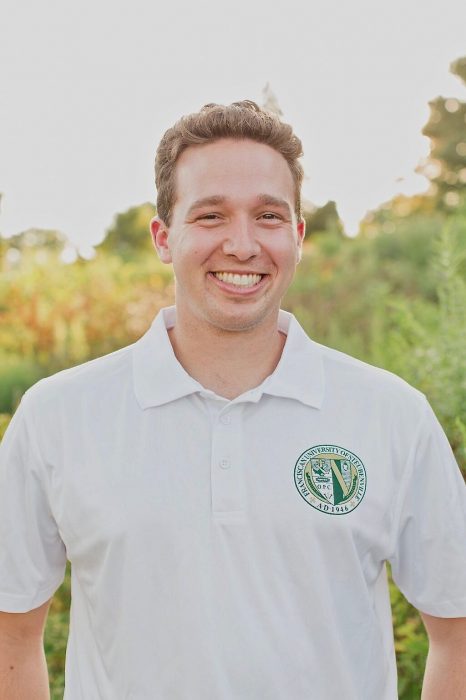 One spring day in 2011, Tom Costello drove in the winning run during the final game played by a Franciscan University of Steubenville baseball team. The Barons’ win against the Bethany College Bison and Bethany Coach Rick Carver was its last as the program was being shut down at the end of the season.

Eight years later, six years after graduating, Costello, 28, is making a return to the hill to serve as residence director of Trinity Hall and assistant coach to Carver, the new coach for Baron baseball, as it makes its NCAA return this year. He hopes to make his two loves — sports and faith — the center point of his ministry.

“The spiritual life and athletics, as St. Paul writes, have a lot of the same virtues and disciplines,” said Costello. “If I’m able to be a witness to that, if I can help people with that, I think that’ll be huge.”

Costello, one of five children, grew in northwestern New Jersey, a part of the state characterized by mountains and hills. Costello said he’s always been a big sports guy, but baseball had a prime place in his diehard New York Yankees heart; so far, he’s visited 14 of the 30 Major League Baseball stadiums.

As he approached his high school graduation, Costello was in a toss-up between attending Franciscan University or another college but chose the former after some gentle nudging from his mother. As it turned out, Costello said, “this was the place for me.”

“I fell in love with Franciscan right away,” Costello said, “especially with the guys in my dorm. It was the first time in my life that I experienced guy friends that were cool and holy at the same time.”

Having played baseball in high school, he continued his career as a third baseman for the Barons, playing through his freshman and sophomore years. In addition to the team camaraderie, Costello said the emphasis of his coach, Doc Marrow, on the integration of athletics and faith was most impactful.

“He was always calling on us to excellence, not only in our athletic abilities, no matter the outcome, but also in our spiritual lives,” he said. “He knew we were at Franciscan not only to play sports but also to grow as people and in the faith.”

But Costello’s playing time, as well as that of his teammates, came to a sudden close. After a long practice on a winter night before the 2011 season, Marrow sat the team down and told them the university was dropping the baseball program. The athletic department had decided to eliminate baseball in favor of adding men’s lacrosse.

Costello and his teammates were crushed. The team had been growing together and improving from the previous year, but it wasn’t enough to save their future.

“It was really rough,” he said. “It was something I aspired to do and something I was enjoying a lot. But we all struggled with the news.”

Costello took the news in stride, however. Having joined Fishers of Men household in the first semester of freshman year, he now had the opportunity to serve as assistant coordinator. He was also able to play more intramural sports and was co-lead of nursing home ministry for a semester.

After graduating in 2013 with a degree in education for high school math, Costello got a job back home in New Jersey, teaching middle school math and physical education.

While looking to switch to a high school teaching position, he encountered the Culture Project, an initiative of young people set out to restore culture through the experience of virtue. Costello was immediately attracted to the group and spent the next three years working for it.

“I just became so passionate about the topic of theology of the body,” he said. “I was still in the classroom and sharing that message with students.”

After three years with the group, Costello felt called to discern the priesthood with the TOR friars, the same friars he encountered at Franciscan. He spent nine months as a postulant and six months in the novitiate before discerning out in December 2018.

Soon after, a friend of his told him about Franciscan’s opening for residence directors. After much prayer, he applied and got the job.

Back at his alma mater now, Costello is eager to give back to the school — and the sport — that gave him so much. In addition to joining the baseball team as a coach, he plans to put on some different prayer programs and ping pong tournaments for his residents.

“I grew so much, and there’s so much fruit that bore in my life because of my four years here,” said Costello. “To be in a position to minister to students is something I look forward to. If by the end of this year, students are closer to Christ than they were at the beginning of it, and if I have anything to do with it, then I’ve done my job.”