First half scoring barrage not enough for Lady Barons in loss 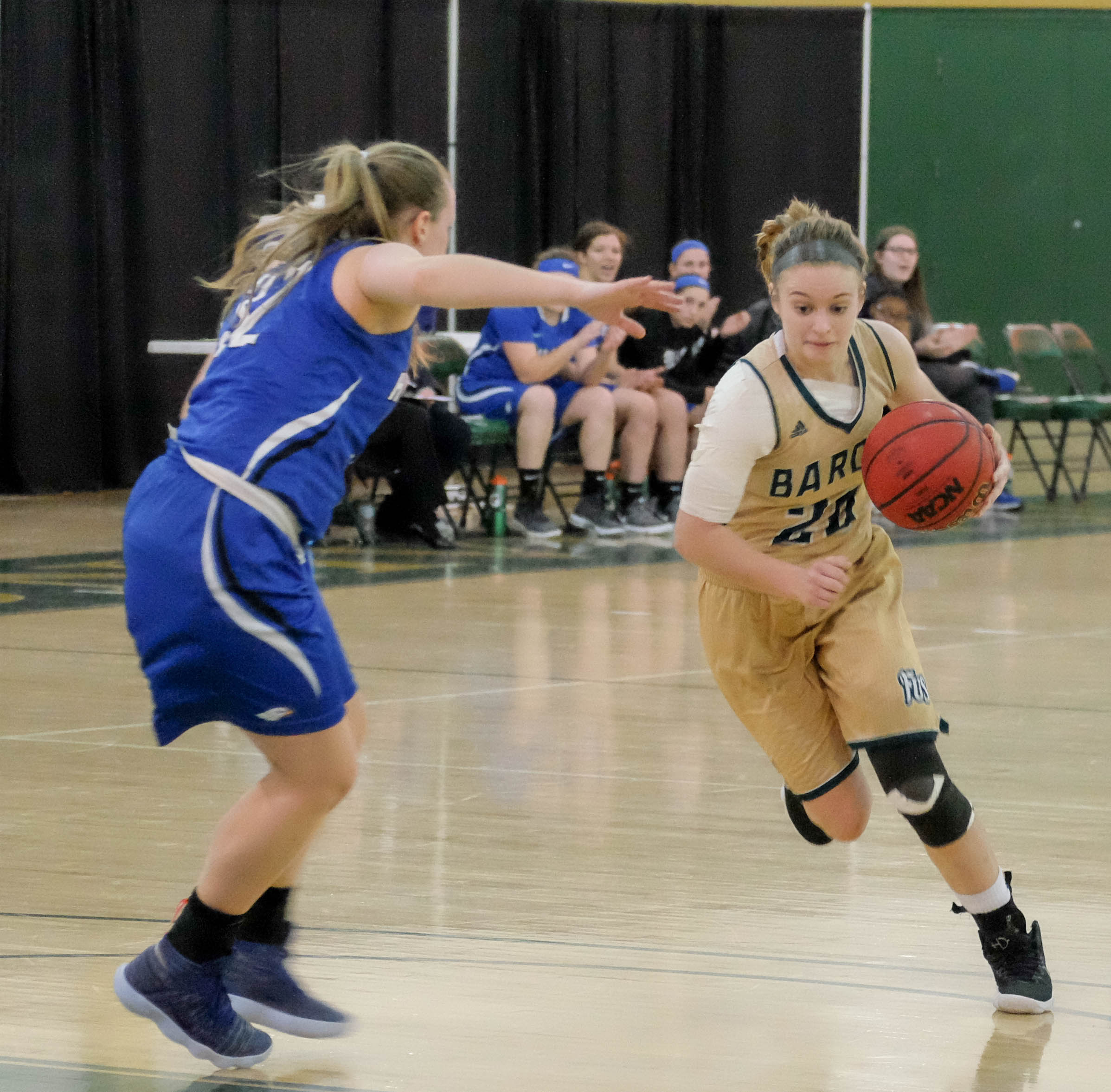 On Saturday, the Franciscan women’s basketball team lost a 73-60 contest against visiting conference opponent Hilbert College, despite a tied halftime score against a squad then 12-1 in conference play.

After a 5-0 deficit early in the first quarter, junior guard Gaby De Jesus assisted sophomore forward Cianna Vaughan, who landed a jumper. After a missed Hilbert three-pointer, Vaughan took a defensive rebound the distance for another short jumper, cutting the Franciscan deficit to one.

Tight Lady Barons’ defense nevertheless allowed Hilbert to accrue an eight-point lead with just over a minute to play in the first quarter, a lead cut to six courtesy of a contested jump shot from freshman forward Laura Salzmann, two of her season-high 10 points of the day.

The Hilbert lead would again become eight early in the second quarter, after Hilbert College landed two free throws. However, in what became their best quarter statistically, the Lady Barons came alive, behind a deep three from sophomore guard Abby Baierl, another Salzmann jumper, and a bucket from junior guard Reagan Stead, made possible via a timely Hilbert turnover.

A well-timed timeout from Head Coach Suzy Delaney halted a potential Hawks scoring run. Sophomore guard Kaitlyn Sonneberger went to the free throw line and connected on the first, bringing the Lady Barons within two points, 26-24. After Hilbert College couldn’t connect on three straight scoring opportunities, freshman guard Rebekah Nevarez gave Franciscan its first lead of the game, courtesy of a dagger three-pointer from beyond the arc with exactly four minutes to play before halftime.

The score would remain close down the stretch; Sonneberger connected on a jumper with 2:35 remaining, and De Jesus gave the Lady Barons their largest lead of the contest, with a three that put the squad up 34-31. Hilbert closed the first half scoring with a three in response, a contested shot with only 43 seconds remaining in the quarter. A Hilbert timeout couldn’t give them the lead, and the teams broke for halftime deadlocked at 34.

Sonneberger wasted no time opening the second half, landing a jumper with only 15 seconds gone in the third quarter. Vaughan added to the Lady Barons’ lead with a jumper of her own barely a minute later, and De Jesus broke the game wide open with a long three that put Franciscan up seven, 41-34.

Up six with less than five minutes remaining in the third quarter, Hilbert College found its rhythm, launching a massive, 14-point scoring run to end the quarter. The team found penetration into a once well-guarded lane and capitalized off multiple Franciscan turnovers. Aided by a scoring drought that saw the Lady Barons miss their final seven shots of the third quarter, the Hawks found themselves up 53-46 at the conclusion of the third quarter.

After trading baskets for much of the fourth quarter, the Hawks further distanced themselves from a potential Franciscan comeback; Hilbert College would lead by as much as 16 points, though De Jesus would record eight of her 17 points before the final buzzer, landing both three point attempts and sinking two free throws in the process.

A Hilbert College layup with 46 seconds remaining in the game put another loss in the record books for the Lady Barons, on an evening marked Kuzma Community Night when the university athletic department celebrated both the memory of famed coach Hank Kuzma, as well as the 60th anniversary of the 1958 National Championship squad. The women’s team drops to 0-19 on the season, while Hilbert College moves to 16-5. The Franciscan women’s basketball team will next look to notch a home win on Feb. 14 at 8 p.m., when they take on conference opponent Mount Aloysius College.