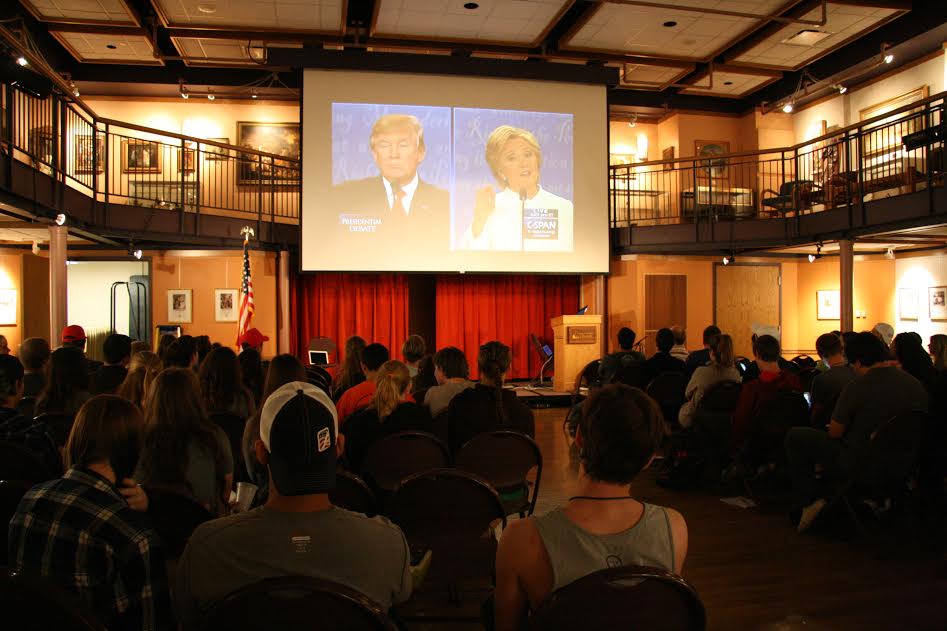 Young Americans for Freedom hosted a party to watch the last debate of the 2016 Presidential Election cycle at the Gentile Gallery on Oct. 19.

A sizable crowd showed up to watch Republican nominee Donald J. Trump and Democratic nominee Hillary Clinton face off for the last time before Election Day.

The crowd was subdued, although many attendees could be heard muttering snide commentary directed at both candidates. Mr. Trump elicited a handful of cheers when he promised to be “pro-life” and gave a brief description of a late-term abortion procedure. Snipes from either candidate against the other received chuckles. Moderator Chris Wallace received the most cheers.

Snacks, including pizza, donuts and soft drinks were provided free of charge.

Most of the attendees said they intend to vote for Mr. Trump, although many said he was not their first choice.

Attendee Justin Grajek was a supporter of Texas Senator Ted Cruz during the primary but is now backing Trump. His main concern is that a Clinton administration would be a “national security nightmare.”

One exception was Sam Tillman, who intends to vote for Clinton, although he listed Republicans John Kasich, Carly Fiorina, and Rubio as better options, any of whom he would have supported had they won the Republican primary. He dislikes Clinton but is more concerned about Trump, whom he described as “an existential threat to the country and the rest of the world,” likely to provoke a nuclear war.

Everyone interviewed said that Chris Wallace was the best moderator of this debate cycle.