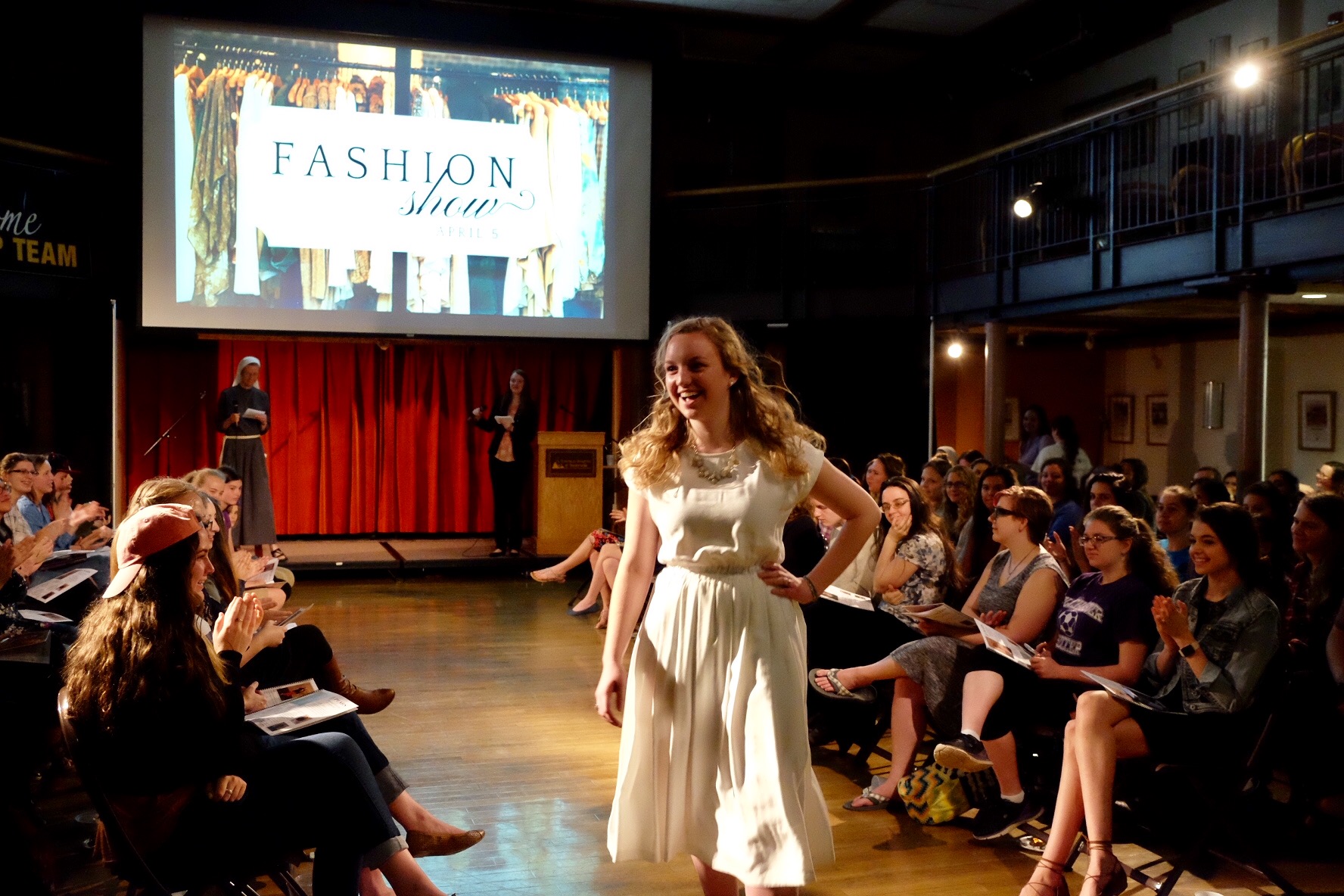 Women’s Ministry hosted a fashion show for the first time in three years as its grand finale to the semester April 5 in the Gentile Gallery.

A branch of Franciscan’s Office of Evangelization, Women’s Ministry hosted a fashion show themed “Living in the Truth,” featuring modest models with talks throughout about the spiritual life, as well as how to dress beautifully and modestly.

Women’s Ministry coordinates various campus activities like painting nights, rock climbing, holy hours and talks. The ministry also works with events like the yearly BeLoved Event and the Capture My Heart retreat, both seeking to help women have a loving encounter with Jesus Christ.

Sister Anna Rose Ciarrone, adviser to the students leaders of Women’s Ministry, said she looked forward to the fashion show as another way to empower the women on campus. Designing the fashion show to be both practical and spiritual, Ciarrone aimed to help women understand both the elements of fashion and their identities as women.

Ciarrone said she hoped to show how women are designed to be by God. The beautiful thing is to “not just tell people what to do or what to wear,” said Ciarrone, but to deepen their sense of human dignity. Ciarrone expected much work would be needed for the fashion show. However, she was optimistic about the fruit of the event.

During the fashion show, Snyder emphasized the balance between the outside—body image and fashion—and the interior—personal holiness. Reminding the women in attendance of their identity in Christ, Snyder said, “The clothing that we wear speaks a language. You are beautiful. You are a child of God.”

During the fashion show, Snyder used Sister Anna Rose Ciarrone as an example of fashion and virtue. Snyder said that “clothing does speak something about who you are.” Snyder showed that Ciarrone’s habit and veil reveals Ciarrone’s purpose. Snyder reminded the audience that this is true not only for religious but also laity. Snyder emphasized the talk’s motto “Living in the Truth.”

Focusing on the practical aspect of clothing, Snyder and Sister Anna Rose discussed different types of clothing and body types. This started with the models individually walking or dancing down the runway. Unlike some secular fashion shows, after each woman walked up to the stage, Rose and Snyder said some facts about the model. They introduced who each woman was as a person in herself. After the personal introduction, they discussed why the model wore what she did, teaching through the model’s example.

Using the models as examples, Sister Anna Rose and Snyder discussed the five different body types. For each body type, they showed at least one woman going down the runway. They showed what type of clothes should be worn where on which body type, showing a video clip of Clinton Kelly, co-host of TLC’s hit TV show “What Not to Wear.”

Snyder recommended trying out one’s daily outfit in one’s room. Reminding the audience that women most often wear dressy clothes to church events, Snyder told them to try genuflecting, profoundly bowing, sitting and walking up stairs. If anything does not feel right, Snyder said, find something else. Snyder encouraged the women to only wear an outfit that is functional, flattering and one that you love.

Both Ciarrone and Snyder, as well as those involved with the show itself, were optimistic with the reaction of the audience.

“(I) hope the people were edified,” said Sister Anna Rose.

Snyder was immediately struck by how happy the women were. Most importantly, Snyder said she wanted the women to know that “you are worth it.”

Madigan Maere, senior, said she liked the fashion show for “helping out other women fit their bodies.” Especially as a model in the show, Maere said she appreciated the fruits of the show, since it involved much formation.

Madison Bolesta, a senior and one of the models, appreciated learning about the differences in women and womanhood. In the end, Bolesta said, “Everyone seems so joyful.”