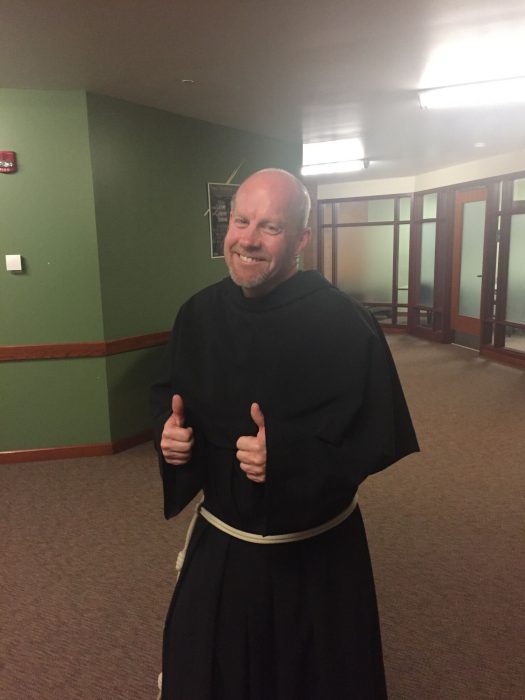 Two years ago, the Rev. Jonathan McElhone, TOR, was the associate director of Franciscan University of Steubenville’s Priestly Discernment Program. Now, having returned from a semester in Gaming, Austria, he is back to direct the newly revamped program.

McElhone, who can be found serving in Masses, in confessions and on the Los Angeles Mission of Peace and planning Steubenville Youth Conferences, graduated from Franciscan University in 2005. In his time here, he studied philosophy and was a member of the, now inactive, non-traditional and graduate student household, Electi Mariae. When he came to Franciscan at the age of 26, he also took part in the Pre-Theologate Program. Today, the program is called the Priestly Discernment Program, most commonly referred to as the PDP.

There have been lots of changes in the program since he was here, said McElhone, but the heart of the program is essentially the same: “Young men living together, seeking the heart of God and where (He) is calling them to in their vocation and how they can grow through experiences together.”

“Though ministerial experiences, conversations and lived prayer,” said McElhone, “(they can) be able to respond to the call of God in their life.”

It is this call that McElhone is excited to help them discern.

McElhone assumed the role as director only a week before the students arrived for the fall 2019 semester. Thanks to his predecessor, the Rev. Gregory Plow, TOR, who had a great deal planned for this fall, the transition was not as rough as it otherwise may have been.

Since the spring semester of 2019, aspects such as prayer commitments and living requirements for members of the program have changed. By prioritizing the vocations of the men in the program, McElhone said this semester he gets to discover the fruits of these changes.

As director of the program, McElhone now has greater responsibilities. That is, in addition to answering questions and providing spiritual direction to the men he serves, McElhone said he knows “that the good and the bad of the program” is now directed at him.

Yet McElhone strives in “prudently addressing those areas that need to be addressed … compassionately” and in a way “that allow(s) the men to learn and to grow as we journey throughout the year,” he said.

He also strives to prepare the men to confront tensions within Church leadership.

“Politics can get in the way of living the Gospel,” said McElhone.

Despite “different views on different dimensions of our spirituality or the way (the men) see … or have experienced the Church,” said McElhone, he wants to help them “see how God is working through their own or other people’s experiences.”

That being said, it must be noted that his heart extends much further than the bounds of the PDP.

“I’m also observing that there (are) a lot of men discerning on campus that are not part of the PDP,” said McElhone, “and I hope to be able to do things to try to help them.”

He even hopes to have some workshops later on this year to help “people learn how to hear the voice of God the Father.”

“Discerning is another buzzword on campus that becomes more like an intellectual gymnastics routine rather than a peace that we actually act on,” said McElhone. “It becomes a thinking about it instead of a lived action.”

Referring to both men and women, McElhone commented, “We can’t discern on our own or even with one other person … because we don’t know what we don’t know. There are others that always discern with you.” He noted that in discerning both religious life and dating relationships, one always needs other people to help one hear God’s call in their life.

He hopes that students will take advantage of discerning “with the greater Church” here at Franciscan University and that they will recognize the plentitude of resources on campus.

McElhone also said that anyone — and he means anyone — who sees him walking around can feel free to stop and chat.

“(I) walk fast for exercise,” he said with a smile, “not because (I’m) trying to ignore people.”

So, if any students happen to see the Rev. Jonathan McElhone, TOR, walking across campus or up the hill from St. Junipero Serra Hall, they should not hesitate to say hello.