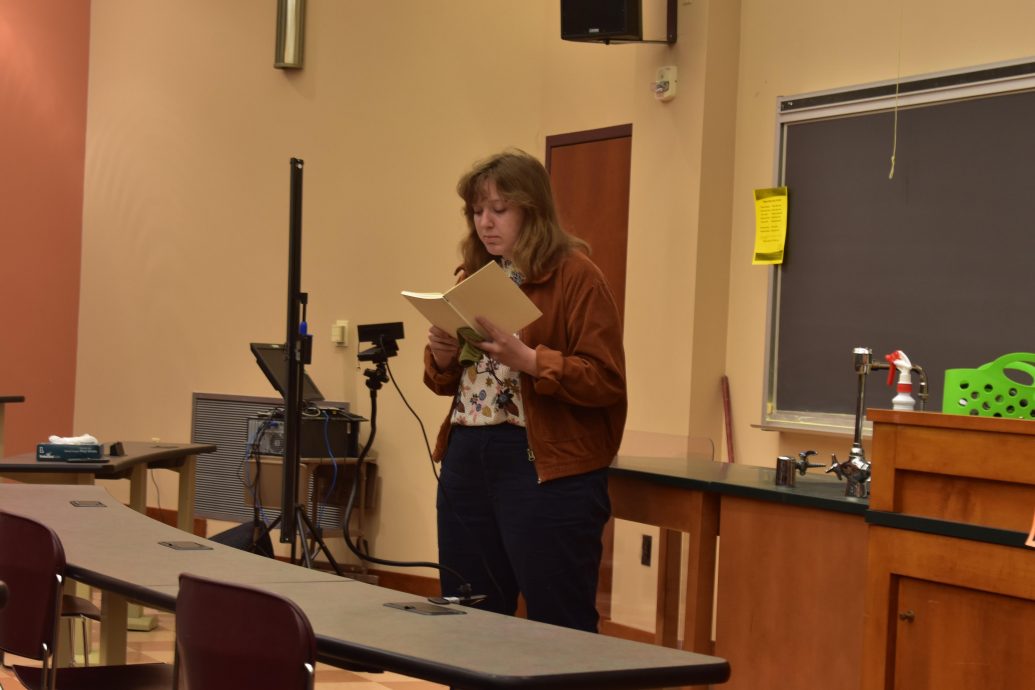 Sophomore Therese Scanlan began the night with a prayerful poem of her own, titled “Joe Young.”

“The holiness and peace here fills to brim, this perfect space of Jesus, glory be. And here I am with Francis holy ones, as holiest one beams brighter than suns.”

This opening set the mood for the night, as students laughed together, cheered each other and shared themselves through the art form.

Speakers were welcome to recite original poetry, classic poetry or even any kind of prose that struck their fancy. The stage was available to anyone who wished to share, although there was no physical mic, as the title of the night would suggest.

A few poems highlighted the night. Julianne Leighton shared a poem called “Birches” by Robert Frost. Although the poem was required reading for her class, she said she has enjoyed the compilation of Frost so much that she does not consider it a textbook at all.

“I don’t know where it’s likely to go better. I’d like to go by climbing a birch tree, and climb black branches up a snow-white trunk, Toward heaven, till the tree could bear no more, But dipped its top and set me down again,” Leighton read.

Freshman Mia Doyle read “Sick” by Shel Silverstein, a comical poem that she additionally acted out.

One final highlight of the night was an original poem that featured one student’s experience in front of the Blessed Sacrament in musical prose.

“I only stared at the celestial being,” he said, “not daring to say a word. Then it spoke, ‘The Lord summons you.’”

Doyle, who studies humanities and Catholic culture, said, “It was beautiful seeing people sharing their passions. It even inspired me to get out of my comfort zone and perform a childhood favorite!”

The English Honor Society has presented multiple open mic poetry nights, as well as a Tolkien trivia night, and said it is eager to present more events in the future.