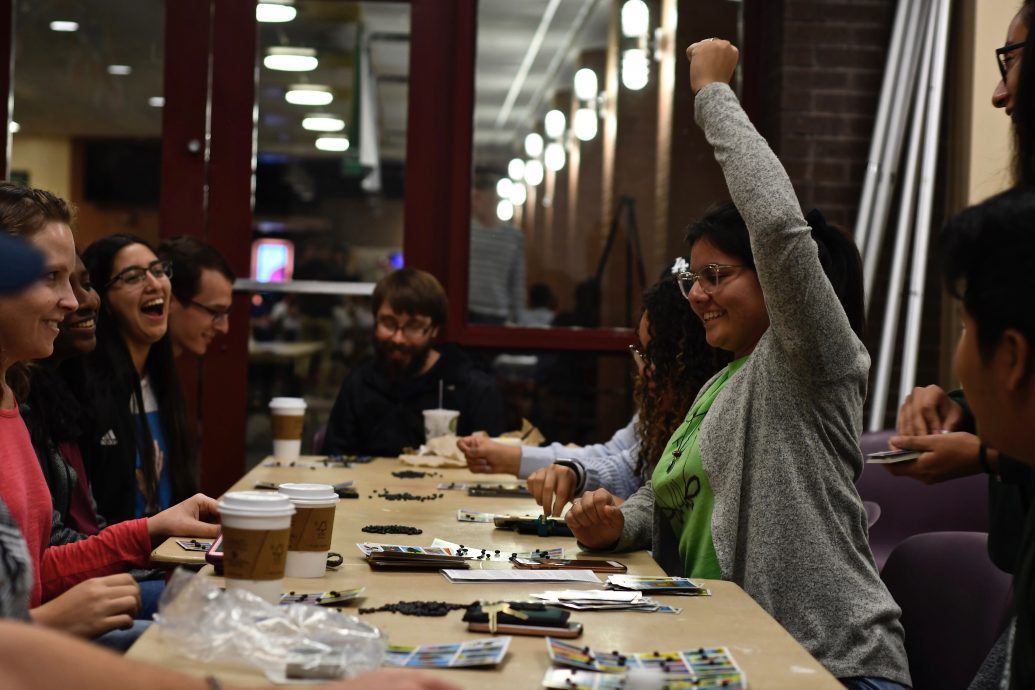 “Lotería!” came the enthusiastic yells from the International Lounge, which mixed with laughter and music as students came to Encuentros Tuesday, Oct. 8.

Lotería resembles a Mexican version of Bingo, and at Tuesday night’s Encuentros — which translates to “get together” — a group of students gathered to play the game. Lotería is played with beans as markers and a 4-by-4 grid game board that incorporates pictures of objects or people, like “la mano” (the hand) and “el músico” (the musician).

Students sat at a table, conversing loosely in a mix of Spanish and English, with the native Spanish speakers making sure to translate for English speakers. The table was set with what resembled Bingo game boards. At the end of the table were prizes: a surplus of candy, chicken slingshots, a llama ring holder and a Lady of Guadalupe candle.

At Encuentros, the game table buzzed with life and laughter as the students played the game. For instance, every time the card reader pulled the card that said “la escalera,” (the ladder) the players immediately said, “Oh, la escalera,” elongating each of the syllables.

While Lotería may sound like Bingo in Spanish, it has some major differences.

“We put more story behind each card or each character,” senior Nico Sandoval said. “Each one has an image how it is, and depending on your family and how you grew up playing the game, some families have jokes or stories behind it.”

During the game, students played speed rounds, in which the reader would quickly rattle off the words while players scrambled to mark their squares. In other rounds, the reader would tell a small joke or fact per card.

Senior Emma Gomez explained how her own family played Lotería. “We have inside jokes for everything,” Gomez said. “At home, I have an aunt named Estrella, so we have a picture of her in there for ‘star.’”

Through Lotería, Encuentros brought a community together. “My favorite part of going to the Encuentros is being with friends who come from a similar background and culture as you,” freshman Nancy Jaramillo said.

Encuentros meets every other Tuesday at 7 p.m. in the International Lounge. The event was hosted by Latinos for Christ.