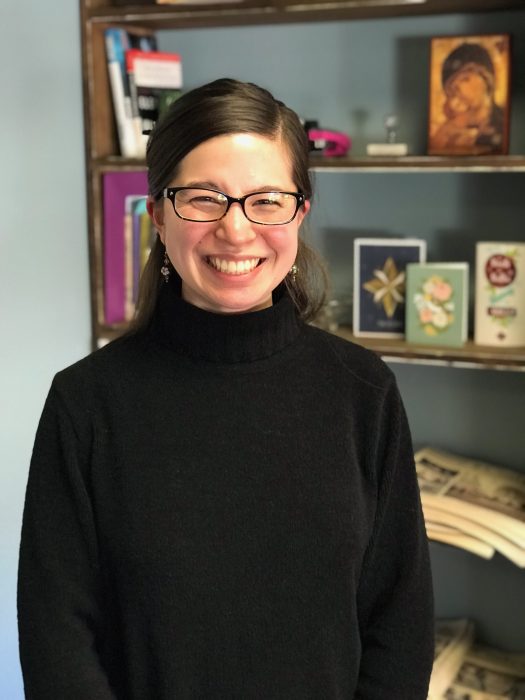 Elizabeth attributes her success in the field of journalism to taking risks. “A lot of my journey has been doing things that intimidate me,” she said.

As a freshman at Franciscan University, she met the Troubadour staff at the job fair and immediately signed on as a staff writer, a position she kept for two years. During the fall semester of her sophomore year, Dr. Wayne Lewis encouraged her to apply for a semester with the Washington Journalism Center. Though it was an intimidating prospect, Elizabeth applied and was accepted to live and work for a semester in Washington, D.C., taking classes and interning at The Washington Times.

Returning to campus in the fall as a junior, she took on the role of assistant editor, a job she hadn’t seen herself taking. However, she stepped up to the challenge and then went on to become editor-in-chief her senior year.

As a new graduate of Franciscan, Elizabeth accepted a position as a reporter for Michigan Catholic, the newspaper for the Archdiocese of Detroit. There was a great deal of learning on the job, such as quite literally being handed a camera when going out to cover a story.

After two years with Michigan Catholic, Elizabeth’s husband, whom she met at Franciscan and married in May 2014, took a job in Kentucky as a religion teacher. She was offered the position of editor at The Western Kentucky Catholic, the newspaper for the diocese of Owensboro, in summer 2015.

Elizabeth was the only person on staff for the Communications Department in the diocese when she began work there. Needless to say, there was a great deal to learn, especially since she wasn’t familiar with farm life. However, she loves the job because she gets to report on small communities in country parishes, where she gets to meet and learn from an incredible group of people. She has also been able to develop the department and add several other staff positions held by coworkers whom she says are the reason she smiles when she comes to work every day.

When she’s not pulling together details to make the paper come together or interviewing people in the community, Elizabeth and her husband coordinate young adult ministry in the diocese. They hold holy hours and theology on tap for young adults throughout the community as well as weekly Bible studies in their home. Elizabeth and her husband enjoy keeping up the community’s spirituality in the middle of the week by fostering an atmosphere of mutual prayer and growth.