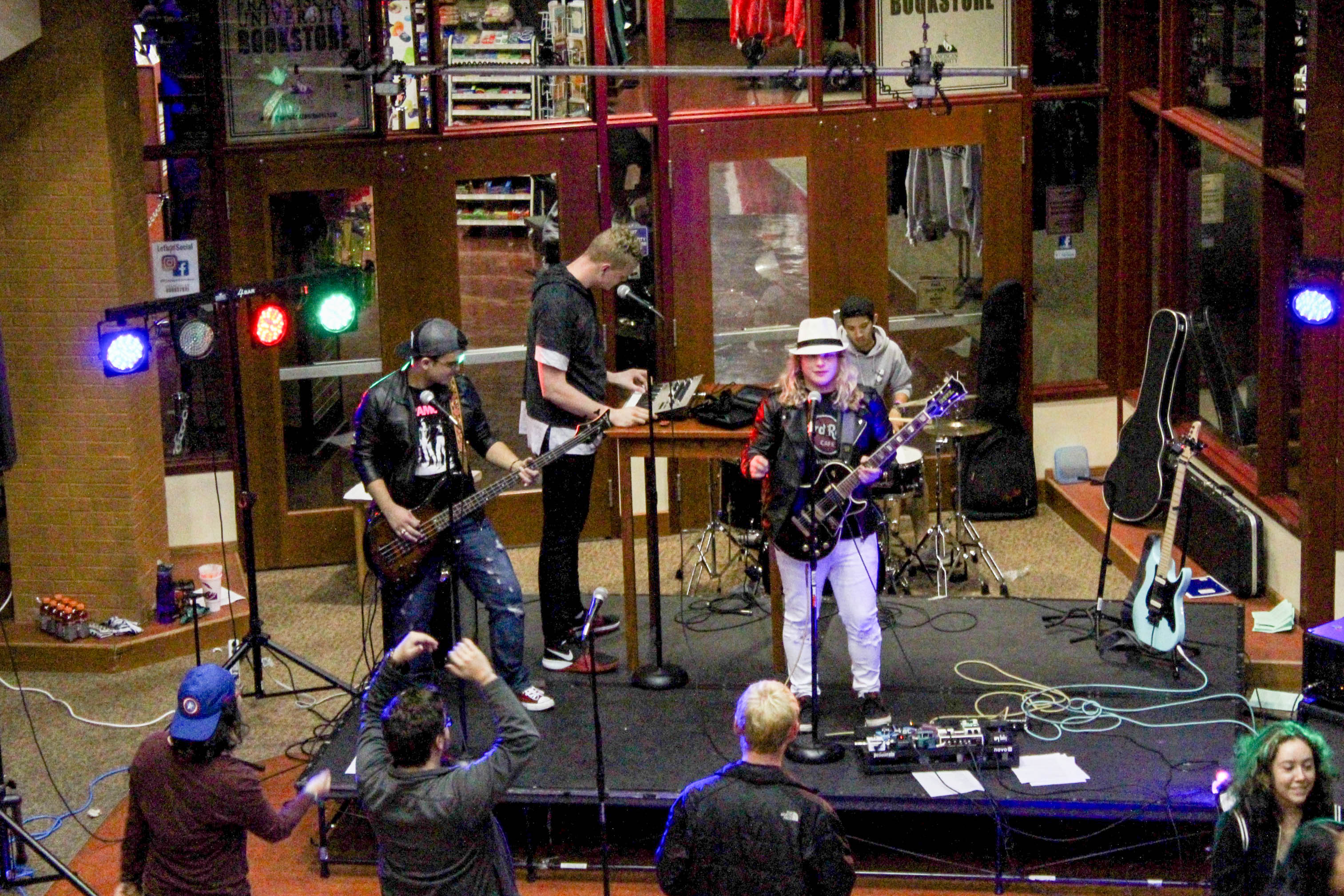 On Saturday Sept. 22, Franciscan University of Steubenville’s student rock band, Dynasty Xero, took the stage in the J.C. Williams Center and rent the air with the sound of electric guitars.

Just moments before, the only sound in the hall had been the general Saturday evening chatter as students milled about or studied in corners. Then, a sudden call split the air. Hindered by inclement weather and technological delays, the concert was late to start, but Dynasty Xero was finally ready to rock. As the members started up the first song, the band was greeted by enthusiastic cheers, and students began to emerge from their study corners to peer curiously over the balcony.

For the next two hours, Dynasty Xero entertained an audience comprised of both faithful fans and curious passersby, the most enthusiastic of which danced on the stairs or played air-guitar. Eventually, a group of fans began to dance out on the floor, and students throughout the hall waved their phones in lieu of lighters.

A relatively new start-up on campus, Dynasty Xero is manned by seniors Michael Schisla and Keith Montenegro, freshman Chris Bergsma and junior Peter Nguyen and is a project inspired by a lifelong love of music. Speaking about his passion for rock music, Schisla said, “I’ve always wanted to be in a band; that’s why I started playing guitar to begin with.”

Though many might see hard rock as an unusual method of evangelization, Schisla is inspired to change the culture. Regarding the music industry, Schisla said, “I was just, like, okay, we’ve got a lot of … wolves in sheep’s clothing. What if we go, what if I go out there and I’m a sheep in wolf’s clothing?”

And Dynasty Xero is here to stay. “What I want people to know on this campus is that we’re bringing back rock and roll,” said Schisla. “You can come to one of our shows, and we’re going to put out a banger, like, every time … You want a rockin’ good time, come see Dynasty Xero because we’re taking this to the top.”

At the concert, Dynasty Xero covered fan favorites across the decades and performed their own original compositions. The highlight of the event, however, was the passion and energy the musicians brought to the show, an enthusiasm which infected the audience.

Gwynne DiMarzio, junior, described the atmosphere, saying, “Dynasty Xero has such a passion for their music! Their energy and excitement is contagious and really made the concert a lot of fun.”

Junior Gabriella Carrizales concurred, saying, “I loved the positive atmosphere of the concert. They all seemed to enjoy themselves and wanted to show the audience a great time.” She also made sure to wish the band well. “I am really happy for them and wish them the best in future endeavors,” she said.

Dynasty Xero will be performing around campus throughout the semester, so anyone who missed them this time can be on the lookout for future venues.