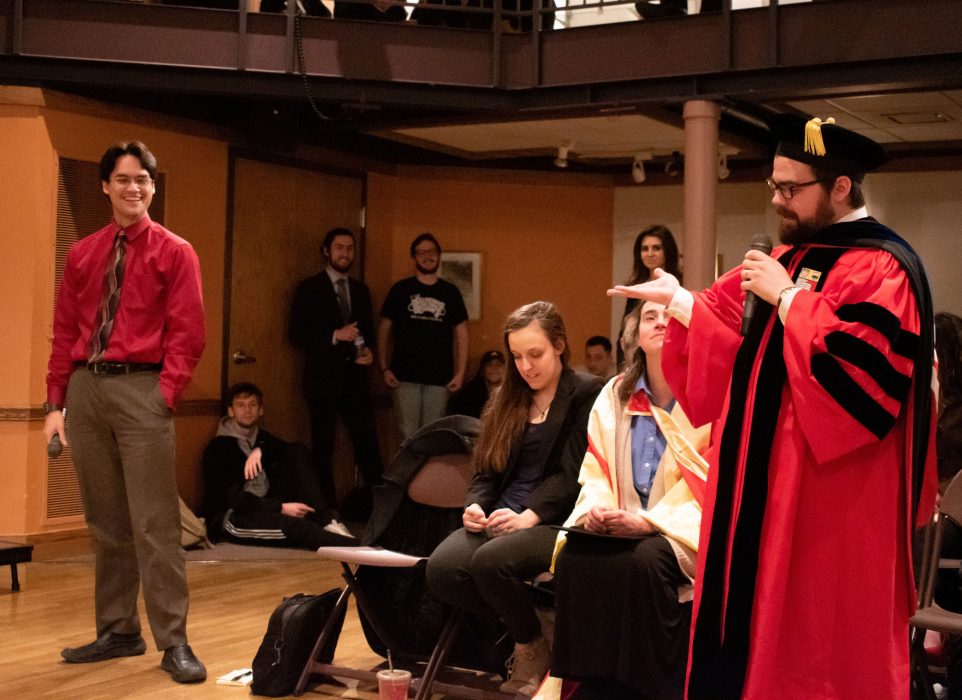 A battle of biology, faith and history erupted during the 18th Dumb Ox Debate over the motion: “This house believes that Darwinian evolution is the best explanation for the diversification of life on earth,” Sunday night Feb. 16 in the Gentile Gallery.

Speaking first in affirmation of the motion was Derek Doroski, who holds a doctorate in biomedical engineering. Doroski preceded his stance by saying that no current theory for diversification of life is totally correct, but he declared that no other theory is as steadfast as Darwinian evolution.

Also affirming was Marguerite Stonier, a senior majoring in biology and theology. Stonier employed molecular and anatomical evidence in support of her stance.

Stonier said, “Even though you have thousands of different species … we all have the same universal genetic code. … This helps show that Darwinian evolution, through natural selection, has some sort of foothold.”

Speaking in opposition was John Bergsma, who holds a doctorate in theology and whose argument centered on the Cambrian Explosion and its seemingly anti-Darwinian evidence.

“(In the fossil record) you don’t see transitional fossils; you don’t see gradualism,” Bergsma said, a problem with the theory acknowledged by Darwin himself. “I agree with Darwin against Darwinism. I agree this is a major problem for his theory.”

“Providing evidence of a dog within a population having a greater variance of white color instead of black color will do nothing to prove that a more complex arose from a simple one,” Da Pra said.

After a period of questions and speeches by students and professors alike, the final vote was tallied. In total, 87 voted to affirm the motion, 68 voted to oppose and 27 abstained.

Junior Ben Duncan, who voted to affirm, said afterward that “the affirming side argued better in light of the definition put forth by the Veritas Society.”

Contrarily, freshman Ben Hooper expressed his dissatisfaction with the vote’s outcome as well as his loathing of Darwinism. “I was highly upset,” Hooper said, “not at the people that were affirming but those that were abstaining. It’s clear what the answer was: it’s no!”

The next debate, a charity event, will address the topic of Franciscan University households. These debates are organized by the Veritas Society.