Dumb Ox debate stirs up issue of modernization in the church 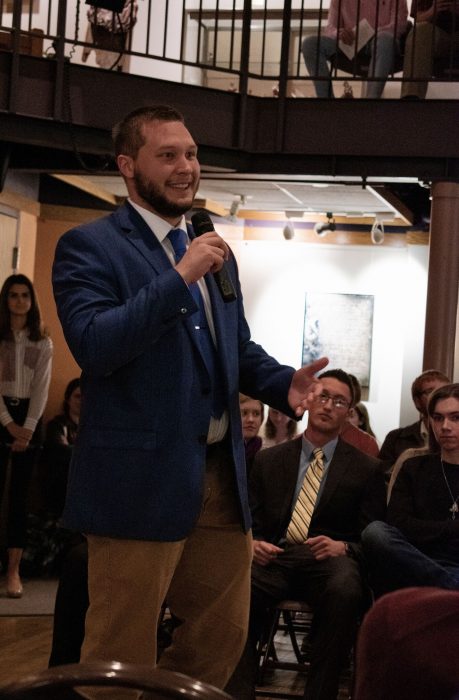 Opinions clashed over the state of the Catholic Church at the 14th Dumb Ox Debate Sunday night in the Gentile Gallery.

Drawing a hefty attendance of nearly 200, the debate’s motion stated, “This house believes that the crisis in the church is due to modernizing the church.”

First to speak was freshman Nate Lamansky, affirming the motion. Lamansky blamed the crisis in the church on its failure to promote Catholic doctrine, focusing instead on watering down doctrine to appeal to more people.

According to Lamansky, examples of doctrinal dilution include the controversial Assisi Conference and the theory of universal salvation. “When you have ideas like this,” Lamansky said, “combined with statements that ‘God wills the plurality of religion,’ it begs the question: Why should one be Catholic at all?”

Speaking also in affirmation was junior Bruce Dexter, who said, “The doctrines of the faith … have been attacked and misrepresented over the last few years.”

Dexter spoke against the Catholic Church’s conformity to modern ideologies. Simultaneously, Dexter praised Saint John Paul II and Pope Benedict XVI for their use of modern language and understanding in harmony with orthodox theology.

Speaking in opposition was junior Bianca Klapperich who defined modernization in relation to modernism. She called modernism a heresy and modernization “a building upon Church tradition in response to signs of the times.”

Klapperich pointed to concepts such as the immaculate conception; she claimed they were private ideas until becoming doctrine through modernization.

Also opposing the motion was senior Peter Flaherty who accredited the crisis to the lack of belief in God’s real presence in the church.

Flaherty reminded listeners that there are great men in the church who have adapted it to modern language. He also claimed the true issue is people who “want to tear down the church.”

An open-floor session followed the main speakers, during which the Rev. Jonathan McElhone, TOR, spoke passionately about meeting people where they are in matters of faith. Additionally, Alex Plato, who holds a doctorate in philosophy, encouraged voters to abstain.

The final vote was 70 in affirmation, 26 in opposition and 46 abstaining.

Freshman Lily McKeough was disturbed by the abstaining voters. “I was disappointed that (Dr. Plato) was telling people to abstain because I think that it’s a very … black or white (issue),” she said.

On the other hand, Grace McGettigan, a senior visiting from Ottawa Township High School, approved of voter abstinence. “(It helped people) come to some common ground.”

The debate was organized by the Veritas Society.