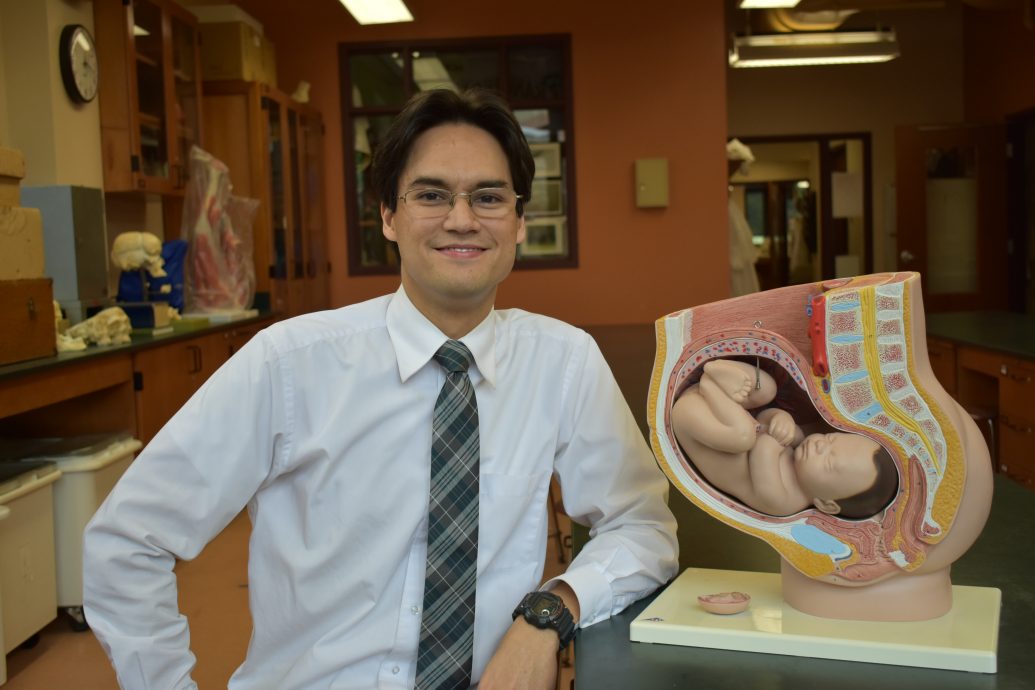 Doroski holds a doctorate in biomedical engineering from the Georgia Institute of Technology and Emory University. His love for integrating faith and science led him to the campus of Franciscan University of Steubenville.

He questioned what God’s will for him was during his college years and kept his eyes and ears open to newly-arising opportunities. After talking to a Franciscan student at a wedding about stem cell research, the student advised him to teach at Franciscan. “I realized I loved to teach, and I could explain science comes out Catholic when looked at objectively,” said Doroski.

“Franciscan was the first place I looked for a job,” Doroski said. “I applied for the job … and I didn’t get the job!” Eric Haenni, who holds a doctorate in zoology, was hired instead. Later, when a faculty member passed away from cancer, Doroski reappeared on the scene to fill the position.

“The fact that he got the job first and then I got the job actually allowed (Franciscan) to have both of us,” Doroski said. “If I had gotten the job first, (Haenni would have been) teaching at another university.”

During his eight years at the university, Doroski has had the pleasure of teaching embryology, a class that introduces the development of a child in the womb. For the class, Doroski does a lesson called the name-the-baby project. The class observes the growth of an embryo from conception to birth through PowerPoint starting on the second day of class. By the end of the semester, the students create names and vote on the best first and last names.

One year in the naming process of the project, the class was deciding between “Val Jean” and “Everdeen” for the last name of the baby. “No one said anything when I said ‘Everdeen,’ and then when I said … ‘and Val Jean,’ it was this great explosion of excitement,” Doroski said.

When he finally announced the baby’s full name, Thor Everdeen, the reaction was hilarious. “When I announced ‘Everdeen,’ one guy in the back corner goes ‘Yeah!’” he said, mimicking the student’s excited reaction with fists halfway in the air.

Aside from atypical school projects, Doroski holds an appreciation for the Marvel universe and Lord of the Rings. “I feel like a key part of superheroes is they need to have limitations,” he said. Doroski’s favorite superhero is Spider-Man due to his moral values and tragic life story. “He’s like a college student. He has no money,” he said jokingly.

“It’s the same reason I like Samwise Gamgee. In Lord of the Rings, he is my favorite character because he’s so useless,” Doroski said.

He went on to compare Samwise’s character with the faithful, saying that even though he seems insignificant, he ends up playing an important role in the story. “I feel like that’s how God sees us. We’re Samwise to him. We’re all the most important person in the world even though we’re small and useless.”

An important non-fictional person to Doroski is his doppelganger, senior Keith Montenegro. Doroski said that he and Montenegro are constantly confused for each other. “I’m a Germa-Poli-pino,” he explained, wittingly describing his German, Polish and Filipino roots. “He is Irish, Norwegian, Filipino. … I’ve gone to things and students would say ‘I thought you were a student.’”

2019-04-30
Previous Post: Critic’s Corner: Lessons from ‘Tangled’: Do you have a dream?
Next Post: Fine Arts Column: Minority report: A pointed musical question