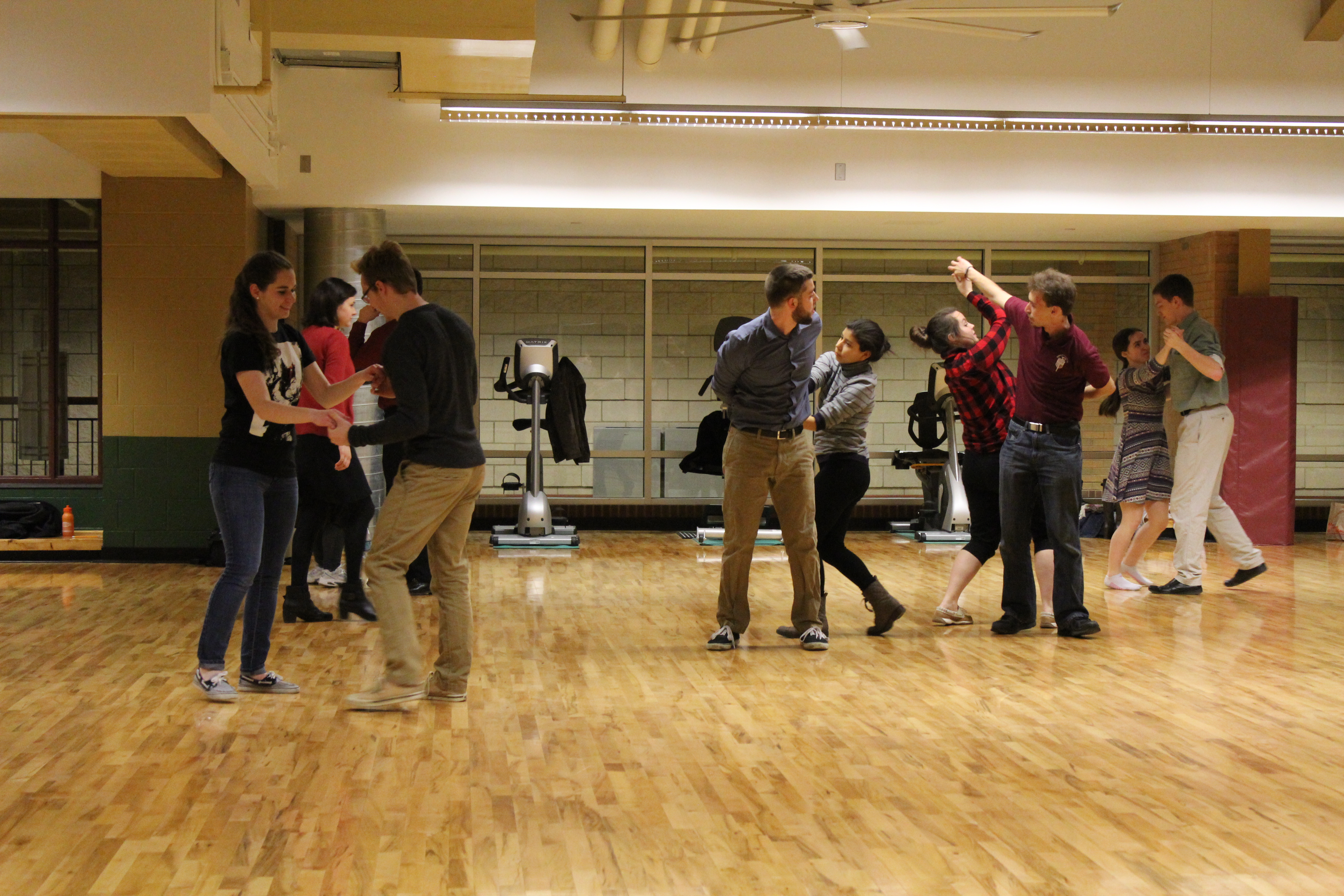 Members of dance club reflect on how the decision to form the club has grown to an expansion of popularity among Franciscan students and variety of dance offered.

The social dance club focuses primarily on swing dance, but also hosts other types of social dances, including different styles of ballroom such as waltz and foxtrot. The club may teach ballroom dance more regularly, should students’ demand call for it.

Rachael Whitman, president of the club, said, “Swing dance is a good way for students to socialize, it’s a way of exercise, (it) allows students to take a break from homework and studying, and allows them to have a good time with friends.”

Whitman said the club came into existence when, in the fall 2015 semester, the dances were no longer allowed to be hosted in the Gentile Gallery, and no one was willing to sponsor swing dance nights. The swing dances had last been hosted by Fiat household in the fall 2015 semester, but no one had stepped up to take over in the spring 2016 semester.

The club was formed by several of the students, including Whitman herself, and they began having regular dances every week in the aerobics room. They are now the only club to host swing dance.

The club has expanded to include swing dances, dance lessons and even competitions

In the fall 2016 semester, the club held a Swing Dance Competition in the J.C. Williams Center with 150 people in attendance. There was also a competition Friday, Feb. 17, and it was also well attended. Whitman said, “It’s nice to see the progress of a student from one competition to the next.”

Swing dance occurs Sunday nights from 8:30-10:30 p.m. in the aerobics room on the second floor of Finnegan Fieldhouse. There are also weekly lessons that vary each semester. This semester, they are offered on Wednesday nights from 5-6 p.m. in the aerobics room. No dance experience or partner is required to attend either of the meetings. Students who are completely new to swing dance can attend a few of the Wednesday night sessions to learn the basics.

Everyone is welcome to attend both the Wednesday and Sunday lessons. Sometimes club members will teach on Sunday, depending on how many people are there and who is there to teach the steps. The number of students who come weekly varies per week during the semester and ranges from 15-40 students and sometimes more.

On Sunday night, a few games are played, such as the blindfold game. During the game, the girls are blindfolded while dancing with a guy. At the end of the dance, they have to try and guess correctly which guy they danced with, and vice versa. There is also the “snowball,” in which one couple starts in the middle of the floor and they dance until someone yells “Snowball!” and then they have to find a new partner. This continues on until everyone is out on the floor dancing. This is designed to get everyone out on the floor dancing so that way everyone has the opportunity to dance.

Member and upcoming president David Forrester said, ”Swing dance is extremely fun. People don’t have to know anything, they can show up and learn and most people pick it up really quick. It’s great stress relief.”

Most of the events and activities of the club are spread by word of mouth. They are also broadcasted on social media such as Facebook, YouTube, Instagram, and their website on Weebly. The club also has an email address: stvitussocialdanceclub@gmail.com

Among their events something new coming this year is the Big Band dance. Whitman said the date for this dance is tentative, but the hope is to get a live band and host the dance in the Fieldhouse. The dance will include both swing dance and ballroom dance.

So whether students have had years of dance training or have never danced before and want to try something new, all should check out Franciscan University’s St. Vitus Social Dance Club.

2017-03-06
Previous Post: Liberal Column: To protect and serve the interest of the state
Next Post: Catholic Values Column: Lent and Legacy