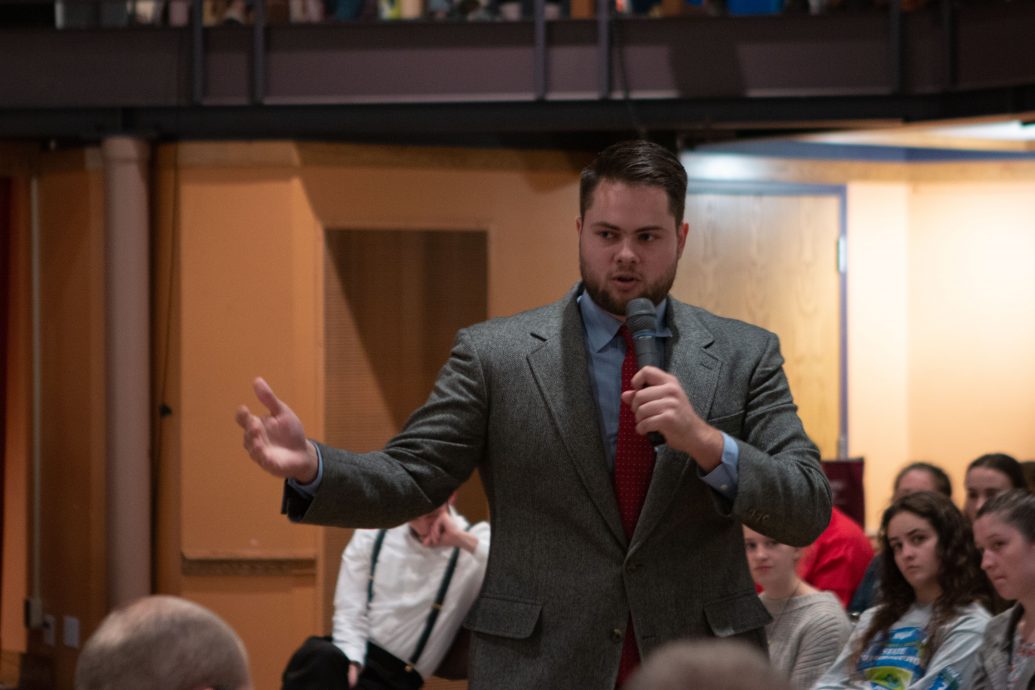 The Gentile Gallery was packed Sunday, Oct. 10, at 7 p.m. in anticipation of a heated Veritas Society Dumb Ox Debate concerning the restriction of the Latin Mass and its impact on Church unity.

The motion for the debate was “This house believes that restricting the Latin Mass promotes Church unity,” and it was overwhelmingly defeated by a 143-22 vote, with 14 abstaining.

“A distorted use had been made … making (the Latin Mass) an emblem for those thinking the Second Vatican Council betrayed the tradition,” Slife said.

Slife defended his position by citing the recent Catholic Identity Conference held in Pittsburgh. Slife said that people are already causing dissension in the church; he cited a speech given during the conference titled “The Catholic Duty to Resist Francis.”

Denley quoted Pope Emeritus Benedict XVI, saying that the Novus Ordo Mass is the same Mass that has been passed down by tradition.

Denley said that restrictions are necessary to stop a growing group that uses the Latin Mass as a banner to cause disunity.

Opposing the motion were Eric Sammons, editor of Crisis Magazine, and senior Hadley Adair. Sammons opened his speech by trying to define unity.

Sammons made a distinction between a worldly unity and a Church unity. He said communion is an example of true Church unity. Sammons said that the Traditional Latin Mass is the deepest expression of communion with liturgy and tradition.

“If we’re saying we have to restrict something to promote unity, then disunity is found,” Adair said in her opening speech. “Uniformity does not equal unity.”

Adair’s words concluded the opening speeches. The floor was then opened up to the audience to speak in five-minute segments.

Most speakers in the open floor section opposed the motion.

Senior Alex Spieldenner said that correlation does not imply causation in terms of faith and orthodoxy.

Denley returned to the floor to affirm the motion. Denley said that he hopes that the restrictions will lead the traditionalist movement into the Novus Ordo so that more tradition can be brought into the rite.

During the lightning round that followed, freshman Peter Sammons fiercely defended the Latin Mass, saying that the Novus Ordo Mass was for those with “weaker knees and weaker wills.”

Junior Miguel Diaz said that there is only one true Mass and that it was Jesus’ sacrifice on the cross, citing that as the source of unity.

Eric Sammons and Slife returned to the stage to give their closing arguments before a vote was taken to decide the issue.

The final vote saw an overwhelming defeat to the motion, with 80% of those in attendance voting to oppose the motion, while 8% abstained from voting.

Junior Maria Sammons chaired the debate; Maria Sammons is the sister of Peter Sammons, and both are the children of Eric Sammons.

Junior Alane Bratt said, “I thought the night went well. I loved the turnout. I actually think it was more productive than most debates I’ve been at, which surprised me.”