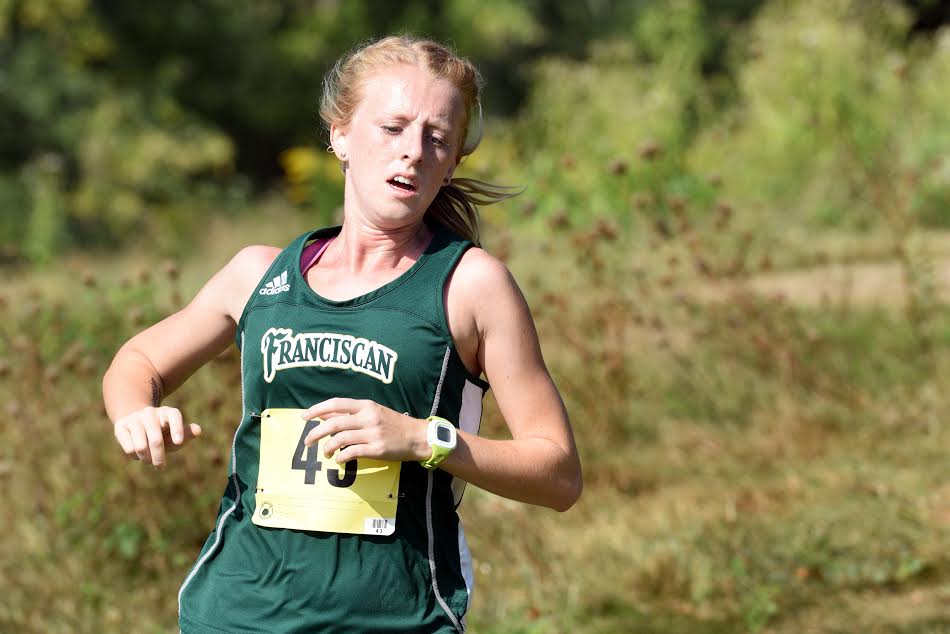 The morning weather made for great racing conditions with a 67-degree temperature and a dry course starting and finishing on the intramural field, and disappearing frequently into back trails. First, the women raced a 5K at 10:30 a.m. and Franciscan immediately took a strong lead.

Throughout both races, cross country chaplain the Rev. Gregory Plow, TOR, along with several students, ran alongside the course encouraging all the athletes and yelling, “All for the glory of God!”

The enthusiasm seemed to motivate Grace Galligan, who with a time of 20.22 finished with over a two-minute lead ahead of her opponent from Carlow University. “I felt really strong and it felt great having my teammates cheering me on,” said Galligan after the race.

At 11:15 a.m. the men set off on their 8K with Franciscan starting in the lead. According to Assistant Coach Shaun McKeegan, “The men ran a good race with only a few men running to compete while some top runners ran in a pack and paced themselves in a tempo workout.” The strategy gave the athletes a break and ultimately led to a victory.

Once a year, Franciscan has the pleasure of hosting a meet on campus allowing students to cheer on the athletes who usually compete away. Franciscan raced against three other teams in a competitive atmosphere which resulted in both men and women winners setting new course records.

With a win under their belts, the runners have high hopes as they approach conference finals during fall break. According to Plow, the men usually finish within the top three, while the women usually win the conference.