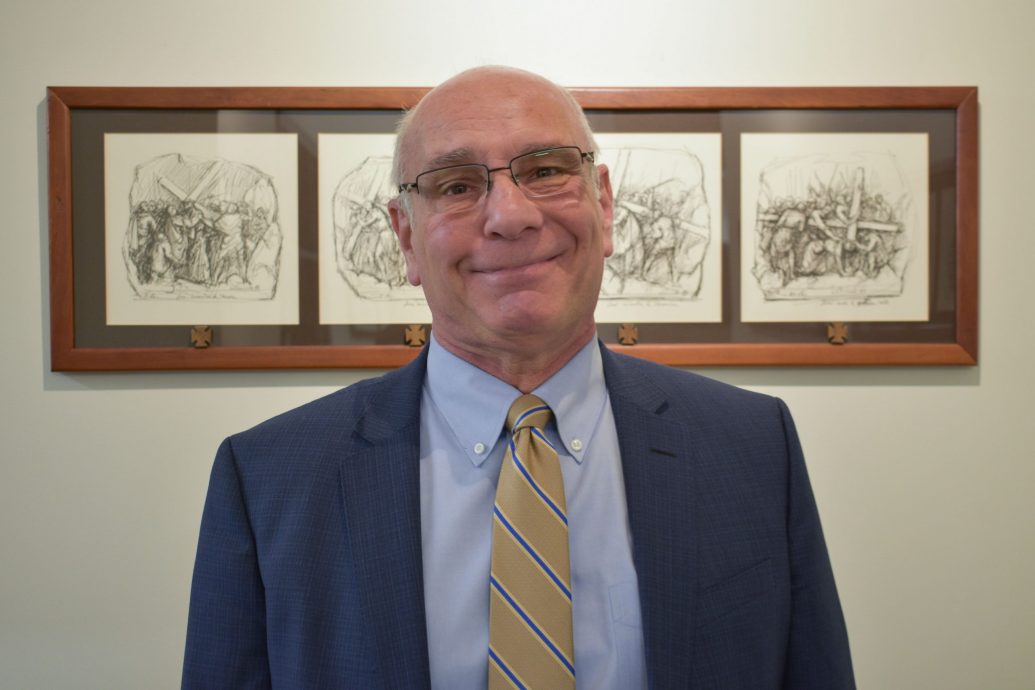 “(In a fundraising career) you meet a lot of very interesting people doing interesting things who are passionate about what they do,” said Franciscan University of Steubenville’s Tom Pappalardo, the vice president for advancement.

Jan. 14 marked Pappalardo’s one-year anniversary of working for Franciscan and overseeing the university’s educational funding management, and his journey to the university involved good people skills and a re-conversion.

Originally from central Connecticut and raised in New England, Pappalardo was an undergraduate at Barrington College in Rhode Island. He was later awarded his master’s degree in communications from Rensselaer Polytechnic Institute in New York.

In order to be successful in a fundraising career, Pappalardo said one needs to “learn how to speak well, write well and think well.”

Before working at Franciscan, Pappalardo worked at a campus ministry organization called the Coalition for Christian Outreach. Prior to that, he had worked at the Pittsburgh Theological Seminary, Allegheny General Hospital and Grove City College, managing fundraising for each.

Pappalardo was born a Roman Catholic and remained such until he was 15, at which point he left the Church and became an Evangelical Christian for the next 40 years.

Within the last decade, Pappalardo began reading the works of the early Church fathers with a group of graduates at the Pittsburgh Seminary. From his reading arose a yearning for the Eucharist and for Mass. What started as curiosity and a “series of circumstances” developed over the next three years until Pappalardo returned to the Roman Catholic Church.

Regarding his current job, Pappalardo said, “It’s really good to be at a place that is as authentically Catholic as Franciscan and to work with people that share (my values) about the faith. … I love the people I work with. They’re all really committed to this place.”

“The (Franciscan University) students I’ve met have been wonderful too. It’s just been really enriching for me to know that what we do in raising money really benefits our student body almost immediately with scholarships and other things that we’re raising money for.”

One of Pappalardo’s recent accomplishments, which he takes pride in, is the refurbishment of his present Pittsburgh home. It was constructed in the year 1900 and had not been lived in for 30 years prior to Pappalardo and his wife’s arrival.

“To take (the house) and almost resurrect it from being an old house to a house that had new life in it was fun,” he said.

In his job with the university, Pappalardo gets to make a difference in many people’s lives. “I work with Father Dave (Pivonka, TOR), the other vice presidents and the board to raise money for the institution for its priorities,” Pappalardo said. His oversight includes the Franciscan Fire Annual Fund, the President’s Circle, alumni relations and other special projects.

Pappalardo stressed the importance of both the Fire Fund — money the university can use where it is needed most — and the President’s Circle — money for student scholarships. “If we don’t have scholarship money,” Pappalardo said, “it’s really a hardship on our students, and many students probably could not even attend.”

Describing other important projects he supervises for the university, Pappalardo said, “Right now, we’re working on raising 3.1 million dollars for the turf field that will be here on campus, hopefully open in September for student use.”

Personal donations comprise most of the money used for the university’s projects, according to Pappalardo. He credits Franciscan’s “strong, authentically Catholic” mission as the reason alumni, board members, friends of the university and parents choose to monetarily support the university.

There are many people willing to aid the university’s mission, and Pappalardo’s job begins with “building a relationship and helping (benefactors) understand what (the university’s) needs are and how they can help,” he said.

Pappalardo discussed some of Franciscan’s needs for the future. Goals included the raising of money for more scholarships and more classroom space, the latter tentatively in the form of a new academic building. Furthermore, Pappalardo expects a largescale fundraising campaign to accompany Franciscan University’s 75th anniversary, approaching in 2021.

Pappalardo also spoke positively about the growing number of Franciscan graduates, strong in their values, positively affecting both the Church and their professions.

“It’s really a joy to be here, and I think the university under Father Dave’s leadership is going to continue to grow and be a place of real formation for our students.”