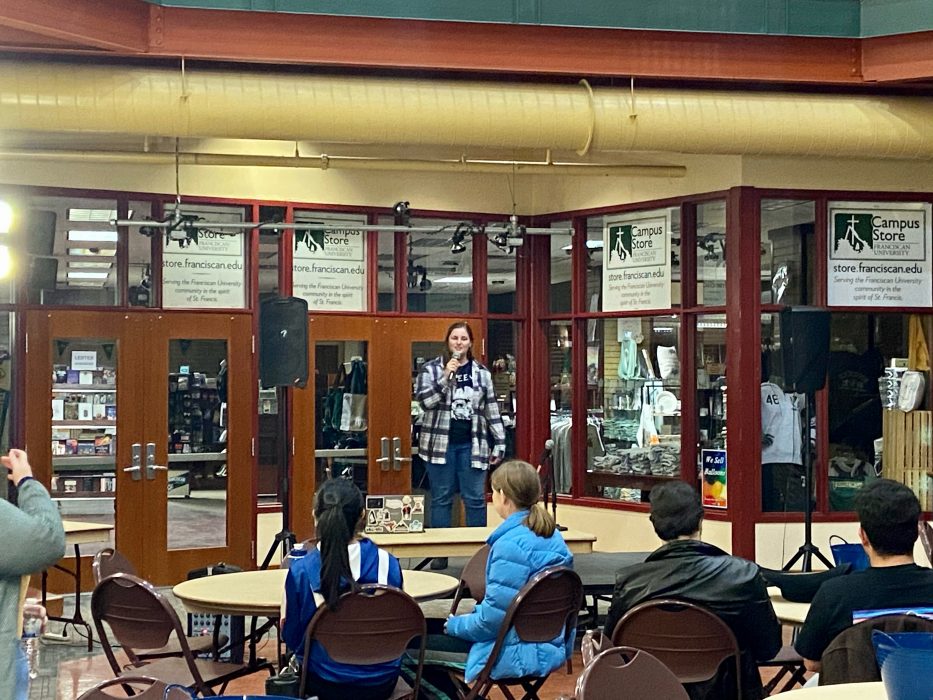 A club put on a karaoke fundraiser for a local women’s support center in the J.C. Williams Center atrium Wednesday at 7:30 p.m.

The karaoke night was organized by Franciscan University of Steubenville Students for Life, a pro-life club on campus. They raised money for Aim Women’s Center, an organization that helps support mothers facing unexpected or difficult pregnancies.

Students for Life did not charge an entrance fee. Instead, they asked for at-will donations in the form of cash and Venmo.

Students could sign up to sing songs as solos, duos or groups.

The karaoke night opened with a performance of Frank Sinatra’s “Fly Me to the Moon.” This was quickly followed by a performance of Billy Joel’s “Vienna.” Both performances brought big rounds of applause from the crowd and attracted more people to the atrium.

One notable performance of the night was when two students dressed up in Spider-man costumes and performed “The Time of My Life” from the movie “Dirty Dancing.” A group of students sang “The Pirates Who Don’t Do Anything” from Veggie Tales.

In addition to karaoke, Students for Life provided free snacks and soda to guests.

The night ended with a male duo performance of “Kiss from a Rose” by Seal.

Sophomore Jeremy Kleb, March for Life coordinator, said, “It was awesome to see people come out, share their talents and have some fun while at the same time raising money for such a worthy cause.”