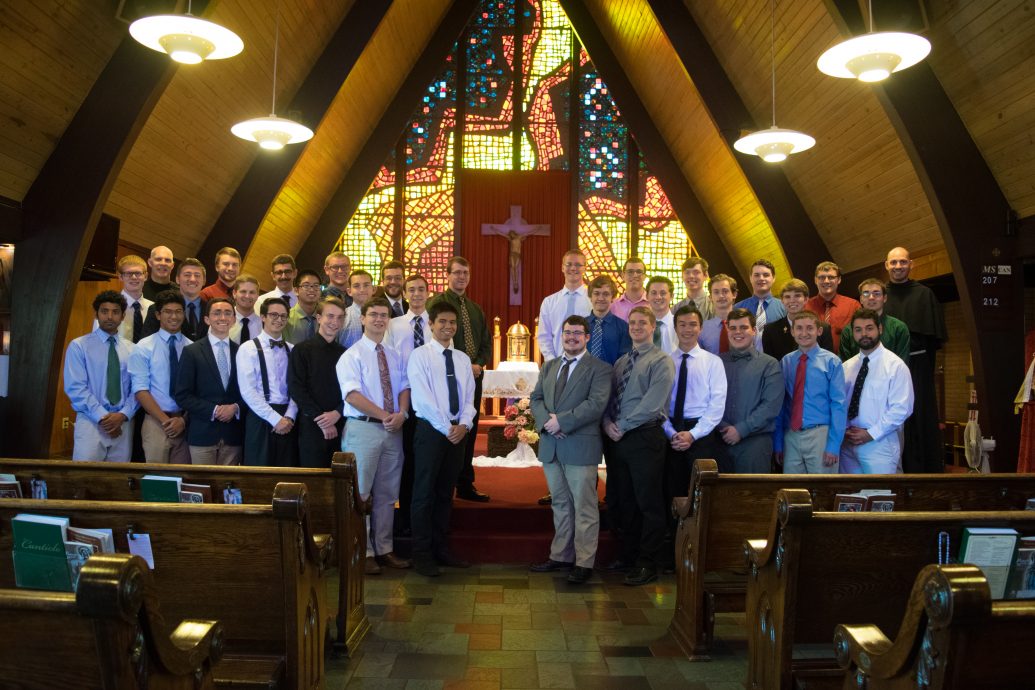 The Priestly Discernment Program has announced a series of changes, effective next fall, that will allow more students to join the program without the high level of commitment currently required.

Instead of being separated into two households with the same level of rigor and commitment, the Rev. Gregory Plow, TOR, program director, has decided to make changes to the content of both households to reflect a difference in stages of priestly discernment.

“One of the main reasons men don’t join the PDP is because of the high level of commitment in both Living Stones and Koinonia,” Plow said. “There are so many men who aren’t being served by the program because they’re busy and the commitment is too much, and I want them to be able to benefit from what the program has to offer.”

Koinonia, previously for juniors and seniors, will remain the same in its commitments and will emphasize priestly formation. Living Stones, the freshmen and sophomore household, will be primarily for initial priestly discernment and have roughly half the required commitments.

The new Living Stones commitments are as follows: Mass four times a week; Morning and Evening Prayer on Thursdays and Saturdays; a daily holy half-hour each day or four holy hours each week; four rosaries or Franciscan Crowns a week; and a now-optional participation in Works of Mercy or a mission trip.

In addition, men in Living Stones will still be required to attend once-a-week PDP formation, join a Christ the King Chapel ministry and receive spiritual direction.

“These reforms open the doors for more athletes who want to discern the priesthood seriously and others who have more rigorous extracurriculars,” said senior Charles Luke, Koinonia coordinator and a member of the program since his freshman year.

As part of the changes, Living Stones members will no longer have to live on wing, although they will have the chance to do so. Because of the lowered number of commitments, they will also be able to join another household or maintain their active status in another one.

Plow said the two households will still live together in St. Junipero Serra Hall and go on retreat together but will have different emphases on formation and discernment.

“Not all the guys in Koinonia are 100 percent sure about applying to seminary, so they still have that discernment aspect,” Plow said. “But most of the guys in Living Stones are still in that initial stage where they want to see if there’s something here for them, so its emphasis is discernment.”

Because they are no longer separated by class status, Koinonia and Living Stones will both be open to freshmen, sophomores, juniors and seniors. If a first-semester freshman in Living Stones feels called to join Koinonia, he would be able to do so as early as his second semester.

Plow said the changes have been in the works since the fall 2018 semester and were finally approved at the end of January. Throughout the process, he consulted many members of the program as well as the PDP staff to make sure the decisions were what was needed.

Luke said, “There’s been a lot of discussion within the members going back a year and a half … and it all came together this semester where we finally said there needs to be a change. We’ve tried to preserve the good things that we have and then open wider the program to allow more guys to enter.”

Since the changes received final approval, Plow has been speaking to several groups on campus to drum up interest and knowledge of the revamped program and said he’s already heard from a handful of men who are interested in joining.

“When people see guys in the PDP who are living off wing and being involved in many other things, I think they’ll want to do it, too,” Plow said.

For those who might be interested in looking into the program because of the changes, Luke, who has been accepted as a seminarian for the Archdiocese of Milwaukee, encouraged them to visit and come to commitments.

“Come pray with us and eat breakfast with us,” he said. “If someone is serious about jumping on board, they should just visit and get to know us.”

Plow said the program is still accepting applications, which are due by the end of May.

2019-03-28
Previous Post: Loneliness from within: An examination of household life today
Next Post: Chemistry Club sparks scientific curiosity in students of all ages