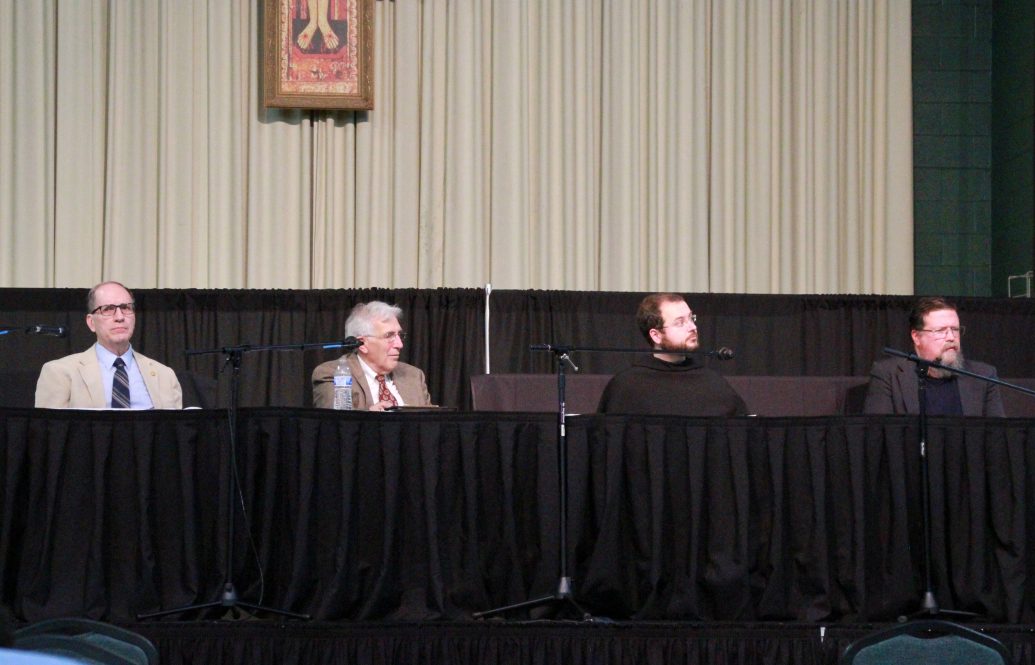 At the Catholic Vote panel discussion Wednesday, Oct. 7, 6 panelists from among Franciscan University of Steubenville’s faculty discussed how a Catholic point of view should influence one’s choices in the upcoming presidential election.

“In the absence of the right to life, nothing else is secure,” said Martin.

Lee spoke of the danger of “relegating an entire class of humans to the status of ‘non-persons,’” and said that those who neglect to act and vote against abortion are guilty of allowing it.

Klimek emphasized that, while many other voting issues are negotiable, abortion and euthanasia are “intrinsic moral evils” that cannot be weighed against less absolute issues, such as the environment.

Sirilla quoted a letter from Pope Benedict XVI and spoke on the relationship between ethics and civil law.

Brian Scarpone, who holds a masters of business administration, pointed out that while the American economy experienced slight, “anemic” growth from 2008 through 2016 during the period when Biden held office, the economy received a healthy boost during Trump’s presidency.

The last speaker, Stephen Krason, who holds a doctorate of jurisprudence, said that to a good Catholic, voting is not only a right but an obligation and a duty. A Christian has an obligation rooted in his or her baptismal promises to act in the service of Christ, he said.

Junior Chandler Talbot said, “It was really good tips and useful knowledge for living out the faith in the modern world.”

After their prepared remarks, the panelists took questions from the audience on related topics.

The event, which was hosted by Stephen Hildebrand, who holds a doctorate of theology, drew a crowd of around 50 people to Finnegan Fieldhouse.

2020-10-14
Previous Post: Dumb Ox Debate questions if faithful Catholics must vote for Trump
Next Post: US Labor Secretary shares importance of Columbus Day and American heritage with students and faculty