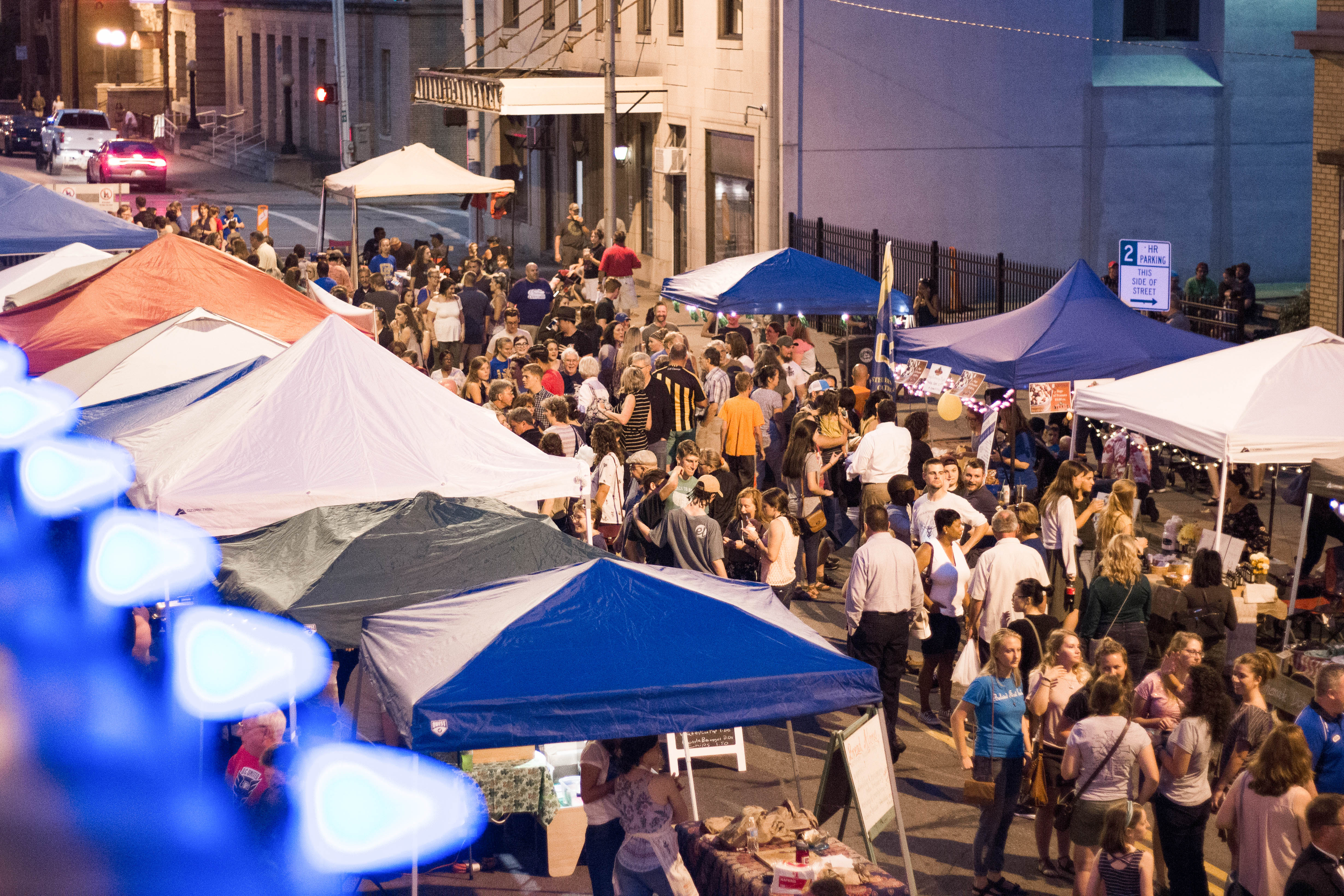 Full streets on a Friday night downtown isn’t something Steubenville has seen in a long time. But the past few months have brought crowds to Fourth Street in what its founders have named First Fridays on Fourth.

The 100 block of North Fourth Street is lined with tents of vendors selling food and artwork, and a stage hosts musicians all evening. More local businesses participating every month have brought larger crowds swelling to the thousands since the project began.

“It’s been a long time coming,” said Nelson. “I’ve been involved with the revitalization efforts in downtown Steubenville for six to eight years now.”

Nelson’s family owns Steubenville Popcorn Co., which has been bringing Catholic business to Steubenville alongside Leonardo’s Coffeehouse and the Nutcracker Village.

Nelson said she looked at what other communities were doing to improve community life and business. The communities had art galleries, so they would let residents and visitors tour the gallery. However, Steubenville does not have a gallery. She talked to Marc Barnes, and they put together the first First Friday on Fourth in May as an art show.

“I tied it to first Fridays and the Sacred Heart devotion, which I’ve done with my family forever,” she said. “Every first Friday since I was a little kid we’d all have pizza and do the first Friday devotion.”

Nelson took the idea to Barnes. “We decided that we wanted to do it nine months out of the year, similar to how you would do a novena to the Sacred Heart,” Nelson said.

Ever since the first month’s theme of an art show, Nelson and Barnes have picked a theme for the festival. “We just started tying them to the events that were going on locally or on a nationally … there’s a frontier festival locally, so we had a frontier colonial style First Friday.” Nelson said.

Most recently, September brought an Irish fest to Steubenville because the month is halfway to Saint Patrick’s Day. This month saw a greater turnout than ever, with several thousand people stopping by at some point in the evening, which lasted from 6 p.m. to 11 p.m.

Several bands, including the folk group Ceili Rain toward the end of the night, played Irish jigs. Couples and children danced, and the Franciscan University Irish Dancing Club put on a show as well. There were booths of food, drink and crafts of all sorts. The smell of ice cream, cotton candy, popcorn and homemade donuts wafted through the air.

Many businesses in the area stayed open late, including Leonardo’s and the Grand Theatre, where some Franciscan students and community members put on a 10-minute show.

The initiative does seem to be revitalizing interest in local business. Students bought handmade soaps and candles, among many other things. One vendor, Elizabeth Yirak, who sells wreaths and flip-flops, said there are many artists in Steubenville that no one seems to notice. “It’s bringing more attention to the fact that there’s not just Walmart and Kroger, ” she said.

Next month will have an Oktoberfest theme and will be part of the Half Hills Music Festival, which is an initiative put on by the Harmonium Project. The festival will take place at Fort Steuben on October 6-8.

Nelson and Barnes’ work is far from complete as they continue to incorporate more elements into First Fridays. They are always looking for more artists and volunteers to contribute to community life in Steubenville.

“We love watching art,” said Nelson. “We’re looking for artists who would like to bring it … I think that would be a great way for students to get to know some of the locals and for locals to get to see what’s going on.” Nelson said.