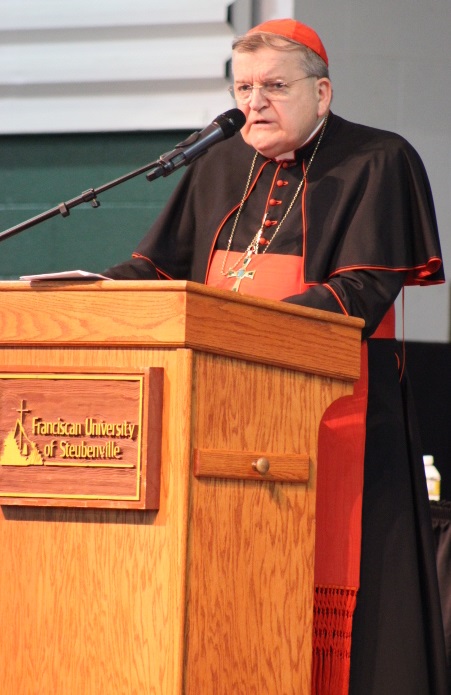 “We live at a time where the fundamental truth of marriage is under a ferocious and indeed a…diabolical attack, which seeks to obscure and sully the sublime truth of the married state as God intended it from the creation,” said His Eminence Raymond Leo Cardinal Burke, standing before a crowd of nearly 1,000 people in Franciscan University’s Finnegan Fieldhouse.

Burke’s nearly hour-long keynote address on the evening of Sept. 8 focused on the “Instrumentum Laboris,” the draft document for the XIV Ordinary General Synod of Bishops, which will meet at the Vatican in October to address the mission of the family in the church and in the world.

“Marital infidelity, divorce and contraception are sadly commonplace today, and now society has gone even further in its affront to (God) law by claiming the name of marriage for liaisons between persons of the same sex,” said Burke, who holds a doctorate in canon law and studied for years in Rome.

He continued, “Even within the church there are those who would obscure the truth of the indissolubility of marriage in the name of mercy, who would condone the violation of the conjugal union by means of contraception in the name of pastoral understanding, and who in the name of tolerance would remain silent about the attack on the very integrity of marriage as the union of one man and one woman.”

For many years, Burke served in the Roman Curia in the Supreme Tribunal of the Apostolic Signatura — the Church’s highest court. He currently is the Cardinal Patronus of the Sovereign Military Order of Malta.

Burke, one of the foremost authorities of Roman Catholic law, addressed many of the main issues concerning marriage in the Catholic Church through 10 themes: “The ‘Instrumentum Laboris’ and the Matrimonial Nullity Process”; “The Nature of the Synod of Bishops and the Question of the Marriage Nullity Process”; “The Risk of Sentimentalism”; “The Relationship Between Faith and Culture”; “The Relationship Between Doctrine and Discipline”; “Confidence in the Natural Law and in the Grace of Matrimony”; “Natural Law and the Formation of the Conscience in the Family”; “Natural Marriage and Sacramental Marriage”; “The Liturgical Rite of Marriage and the Favor of the Law”; and “A Note on a Penitential Path.”

Quoting Pope St. John Paul II’s apostolic exhortation, “Familiaris Consortio,” Burke said, “The Christian family, in fact, is the first community called to announce the Gospel to the human person during growth and to bring him or her through a progressive education and catechesis to full human and Christian maturity.”

He showed how Pope St. John Paul II stressed the importance of the church witnessing to the truths about marriage and the family because “the wellbeing of society and her own good are intimately tied to the good of the family.”

The purpose and nature of the Synod of Bishops is described and explained in canon 342 of the Code of Canon Law, which states, “The Synod of Bishops is a group of bishops who have been chosen from different regions of the world and meet together at fixed times to foster closer unity between the Roman Pontiff and bishops to assist the Roman Pontiff with their council in the preservation and growth of faith and morals and in the observance and the strengthening of ecclesiastical discipline and to consider questions pertaining to the activity of the Church and the World.”

Burke stressed that the Synod is not convened by the Roman Pontiff to suggest changes in the doctrine or discipline of the church, but rather to “assist the Roman Pontiff in safeguarding and promoting sound doctrine regarding faith and morals and in strengthening the discipline by which the truths of the faith are lived and practiced.”

Burke also spoke on the risk of sentimentalism, “there is a risk of falling into a sentimentalism which, while it seems compassionate, is deeply harmful because of the lack of the respect for the objective situation of the person involved.”

He explained that this false compassion blocks the sinful person’s encounter with Christ because this sentimentalism sees the truth of Christ as something hurtful, and without this life-giving truth, the person is not capable of abandoning the sin in question.

Burke said people need to ask themselves if sentimentalism or false compassion has inspired the suggestions to modify radically the declarations of the nullity of marriage in order for the people involved to receive such a nullity more easily and rapidly.

He said many have suggested that the church should update practices and its language in order to address the secular culture.

“Some have gone so far as to assert that the Church can no longer speak of the ‘natural law,’ ‘intrinsically evil acts,’ ‘irregular unions’… (because) the language itself already makes the culture hostile,” said Burke.

Burke continued by saying that people cannot shy away from church doctrine, but that the church must always speak the truth with love, “manifesting the greatest compassion which necessarily involved respecting the truth of the cultural situation which many times is marked by confusion and error regarding the most fundamental truths of human life and its cradle, which is the family.”

He said that honest individuals who live in such a secularized culture have a thirst for the truth and for its “proclamation with charity.”

Burke commented on the proposed changes for the nullity of marriages in the church by saying if the process for determining whether a marriage can truthfully be considered annulled was shortened and, thus, became inadequate, it would bring a lack of due respect for the “indissolubility of Holy Matrimony.”

He said the process of annulments is not in need of modifications, but the practice of certain bishops who do not “provide well-prepared and just workers for their tribunals.” Burke also said that the process is extensive for an “important and delicate matter, salvation of the souls involved.”

“In our culture, there is confusion about the meaning of human sexuality which is bearing the fruit of profound personal unhappiness,” said Burke. “It often leads to the breakup of marriage, to the corruptions of children and young people and ultimately to self-destruction.”

He called for the witness of the distinct gifts of man and woman through a chaste life: “Christian marriage is the first place of such necessary witness in our culture.”

Burke also said that without a sound and stable family life, the culture will never be transformed.

Burke called on the examples of St. John the Baptist, St. John Fisher and St. Thomas More who were defenders of marriage to show the Church the way during these trying times. He told those in attendance to invoke their intercession so “the great gift of married life and love will be ever more revered in the church and in society.”

Burke closed his keynote address by saying, “The mission of the Synod on the Family is clear: the … heroic witness to the splendor of the truth about marriage. The Synod fathers and all faithful Christians must be ready to suffer as Christians have suffered down the ages to honor and foster Holy Matrimony.”

He said, “I enjoyed his last comments on the universal call to martyrdom for every single Catholic, how you just have to live every day for God. And it is as simple as that, you don’t have to over-complicate it. … It’s going to be hard, but it’s fine because he is going to help you if you pray.”

Sarah Freddino, senior Franciscan University student, said, “I see that there is such a crisis going on right now in everyone’s understanding of what marriage is … I am still trying to grow in how I can defend it and how I can explain it to others. … I came tonight so that I can be informed myself because I feel like there is such a need for all of us to go out and to share what the church teaches.”

Another senior Franciscan University student, Alexandra Hamar, said, “I don’t think it was any one thing that any one in particular said, but just the fact that they had this event and to see … one of the most orthodox cardinals in the church here at our university and to see all of our philosophy and theology professors sitting on a panel defending the perennial teachings of the church was so beautiful and fulfilled such a desire in my heart to see that truth upheld on our campus. I was just so enlightened and enriched by it.”

Burke’s address and the subsequent panel discussion with Franciscan faculty and other academic experts can be viewed at http://www.franciscan.edu/Henkels-Lecture/Burke.

The evening’s events were preceded by a very well-attended Pontifical High Mass, celebrated by Burke at St. Peter’s Catholic Church in Steubenville earlier that morning.