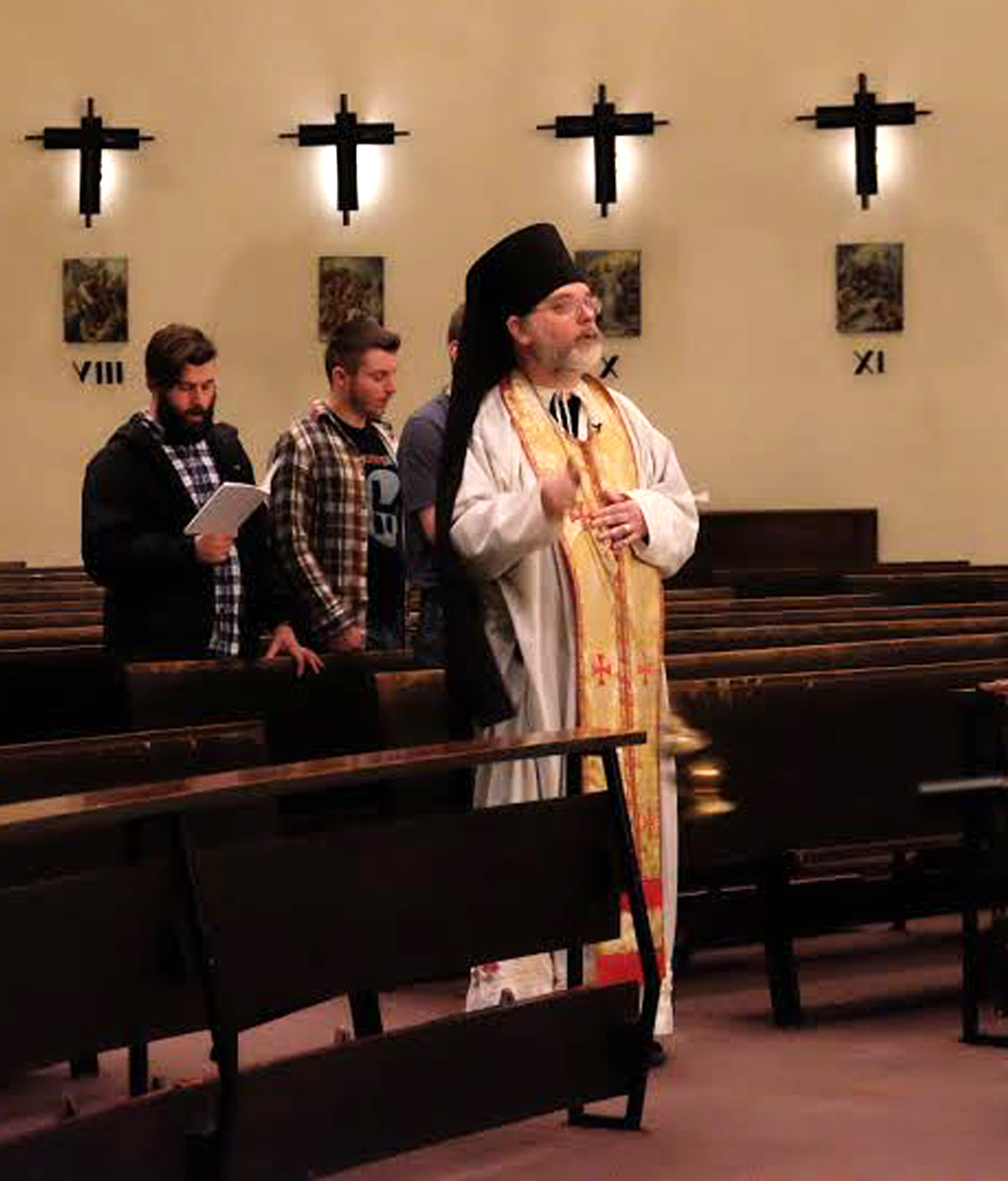 On Jan. 31, students walking by Christ the King Chapel in the evening were greeted by the sound of melodious singing from within: the Akathist Hymn, a prayer sponsored by the Byzantine Club on campus.

An Akathist Hymn is a long and ancient hymn in the Byzantine Rite that can be sung in honor of Mary, the saints, and Jesus. The particular hymn that is sung on campus is the Akathist Hymn to the Theotokos and Ever-Virgin Mary, a hymn originally written by St. Romanos the Melodist in the sixth century A.D.

“The Akathist Hymn is very much an expression of Byzantine Marian piety,” said graduate student David Donahue, president of the Byzantine Club.

According to the Rev. Seraphim Beshoner, TOR, the Byzantine Club’s chaplain, this hymn is very spiritual.

“It’s good in terms of increasing devotion to Mary and devotion to Christ,” said Beshoner.

The Byzantine Club began consistently hosting the Akathist Hymn last semester, when the club approached Beshoner with the request for him to lead it.

Donahue said before last semester, the Akathist Hymn had been sung on campus a handful of times, but it was always led by a lay person. Beshoner, who is a bi-ritual priest and therefore has faculties in the Byzantine Rite, has been able to offer the Akathist Hymn.

“He’s been very gracious in … offering it for us and for the university,” said Donahue.

Beshoner explained that the Akathist Hymn was sung on the Austrian campus while he was there, so it is something that returning students from Austria might already be familiar with.

Now, one Tuesday a month, students can come to Christ the King Chapel and step into the past with this ancient Byzantine prayer. Donahue said that while most people think of Mary simply as Mediatrix or Co-Redemptrix, “the Akathist goes back to Mary as the new Eve, Mary through the lens of the Scriptural writers.”

Each stanza of the Hymn is about the life of Mary. Beshoner said, “It expresses, really, salvation history as seen in the life of Mary and the life of Jesus, starting with the Annunciation and then really going all the way through the time of the Resurrection.”

Beshoner said the nearest comparison for the Roman Rite to better understand the Akathist Hymn is saying a novena. There is no set time in the Byzantine Rite for when to sing the Akathist, and it is not sung during the liturgy, but it is often sung on Marian feast days. This particular Akathist is commonly sung, especially on the Feast of the Annunciation.

Donahue said that, though the Akathist looks different than a rosary and other Marian devotions, it is still directed toward the same Mary, and “it expresses our love for her.”

Though this devotion is different than Marian devotion in the Roman Rite, it is easy to pick up.

“The programs are very good in terms of the notes,” said Beshoner. “If you’re able to learn Gregorian chants you’ll be able to learn the tones that we have.”

Beshoner said not only the tones, but also the words of the Akathist are beautiful. It contains a series of titles for Mary, and also deep language about her and who she is to humanity.

The Byzantine Club invites all students to come join them in singing the Akathist. It is especially worth it, said Donahue, because “it will express Marian devotion in a way you probably have never heard of.”

The date of the next Akathist will be announced in the bulletin. With any questions, email the Byzantine Club at ByzantineClub@franciscan.edu.

2017-02-15
Previous Post: Womens and Men Events reinvigorate campus
Next Post: T.O.R encourages students to take to heart the beauty of the Eucharist