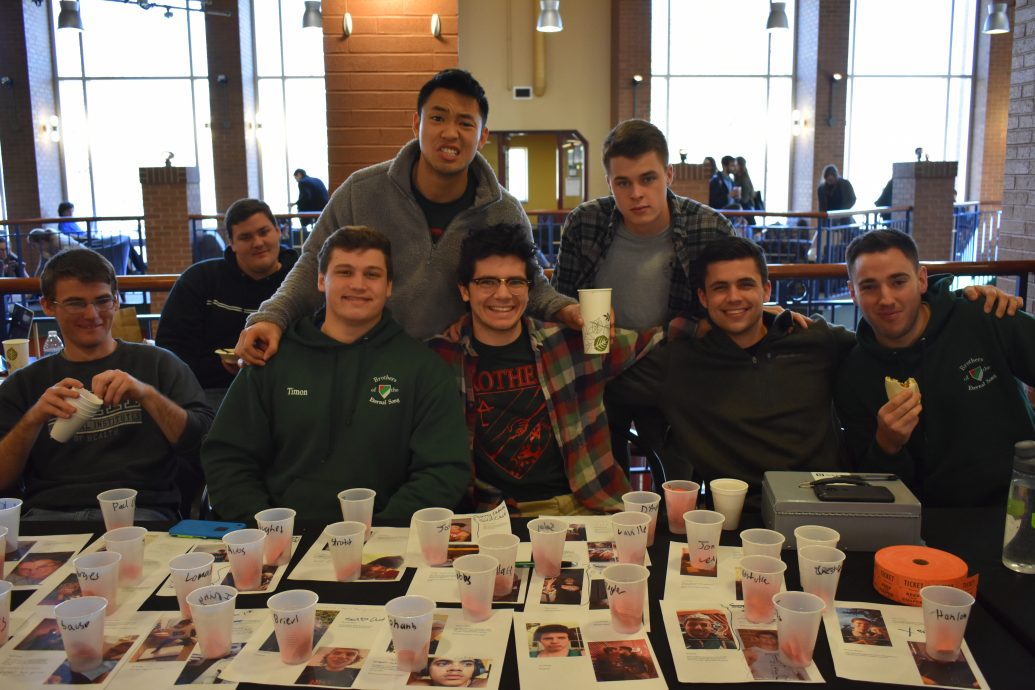 Visitors to the J.C. Williams Center on Feb. 19 and 21 were welcomed by the sight of a men’s household hosting a raffle unlike any other.

The Brothers of the Eternal Song spent those two days auctioning off household brothers to be personal maids, chauffeurs and more at the annual Buy-A-Brother fundraiser.

The brothers’ fundraiser, which was for raising money for their household retreat, functioned like a raffle, with each visitor being able to purchase tickets to place in his or her favorite brother’s jar.

The fundraiser also had an option to “buy out” a brother by paying $20 for a guaranteed win.

Senior household member Kyle Aubert had a suggestion for potential buyers: “(A) great option is (to) buy a brother out when your parents come in town. You can introduce him as your boyfriend. You really get a firm handshake when talking about sports to the dad.”

Winners can ask their brothers to do anything within reason and the limit of 60 minutes.

After a brother is won, “he can do anything except sexual favors and homework,” said Aubert, recognizing that the fundraiser’s name might sound scandalous. However, the brothers adhere to Franciscan University of Steubenville’s policies.

Some brothers serve their entire hour at one time by acting as chauffeurs, cleaning dorms or doing laundry. Aubert said he was once “bought out” to clean his own common room.

Other times, the brothers serve their time in short increments over 60 days.

One brother told the story of the year when he had to approach the girls who “won” an hour with him and refer to them as princesses whenever he saw them in the J.C.

Aubert described the creation of the fundraiser, saying, “I was sitting in my room one day, and I thought, ‘What can we sell to raise money for retreat? … What do we have that no one else has?’ Ourselves.”

While the concept is a fun idea in itself, Aubert said that “it’s also a way for us to do service.”