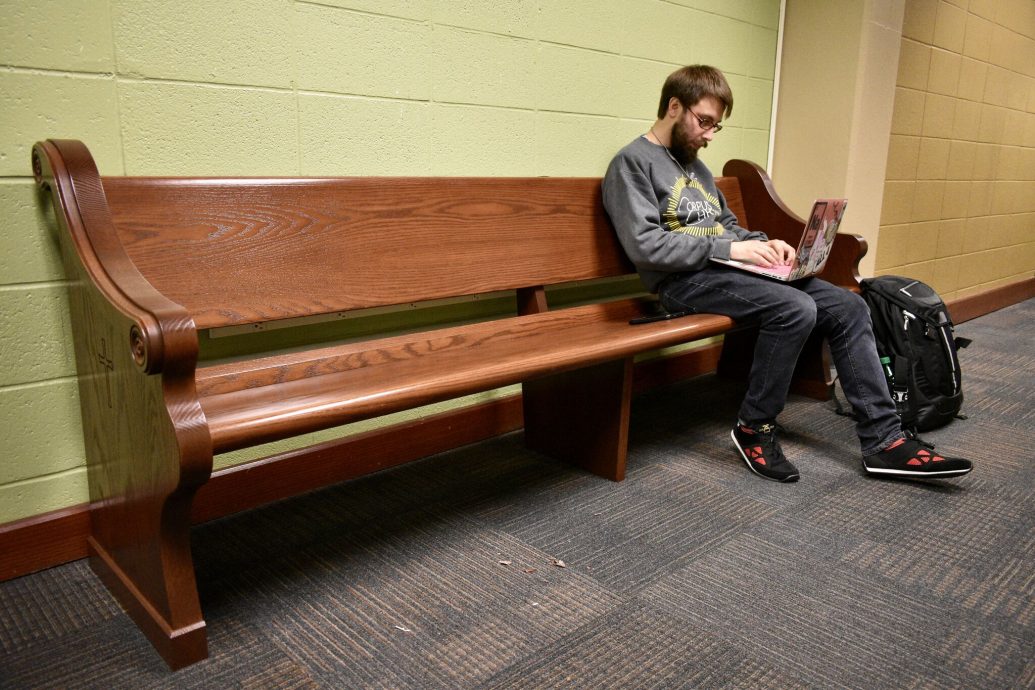 “(The pews) feel like home. … They’re really nice and a good place to sit on besides the floor,” said junior Jaymee Libetti regarding Egan Hall’s recently-installed pews.

Egan’s church-themed seating arrangements, and their power outlet counterparts, have drawn tremendous praise from students like Libetti. Having only been in place for about two weeks, the benches have already seen extensive use.

Students expressed their relief over finally having proper seating along the halls of Egan. Junior Andrea Beganskas, for example, was overjoyed with at the convenience and comfort of the pews.

“I like it so much better than sitting on the ground between classes,” Beganskas said. “You can put your bag on there. … You’re not just sitting against the wall (anymore). It’s nice!”

The pews and outlets are the result of a remodeling project undertaken by Franciscan University of Steubenville’s Physical Plant Services. The benches in particular had been in planning for about two or three years, during which concepts were developed and funded.

The director of Physical Plant and overseer of the project, Joe McGurn, elaborated on the story behind the pews. “(The Physical Plant) had been looking at ways to get more collaborative areas for students to sit and either study, visit or talk about academics or other things,” said McGurn.

McGurn traced the idea for the pews back to Dr. Daniel Kempton, Franciscan University’s Vice President for Academic Affairs and Professor of Political Science. Kempton developed the idea for pews in Egan after observing the benches in Saint Louis University’s academic buildings.

Egan’s benches, manufactured by Sauder Worship Seating, owe their church-reminiscent design to the Catholic nature of both Saint Louis and Franciscan Universities. Their design is one of Sauder’s templates to which custom emblems were added. Etched onto the pews’ sides is an emblem of either a cross or the Holy Spirit as a dove. The final emblems were chosen from among 12 other prospective images created by the Physical Plant.

McGurn also mentioned how the benches were designed to be slim, nestling into the fissures of the hallway so as not to be a fire hazard. “The architecture of Egan Hall is difficult to work with to create those spaces. … We like to have more seating available, but the hallway is also your path of egress in case of an emergency. … We couldn’t just encumber the quarters.”

All of the pews have a noticeable slit on the back. The slit opens out onto a newly installed power outlet strip accompanied by an easily accessible metal platform for setting phones down. McGurn said, “(The outlets were added) because students are always looking for ways to plug in (their phones). You don’t want to put them down low where (people) would have to crawl under the bench and plug it in.”

Unfortunately, the power strip is not yet functioning. The Physical Plant is currently awaiting a shipment which will allow them to complete the electrical work. McGurn is certain that the outlets will be up and running by the end of fall break.

Even though the outlets are not yet working, students have been thoroughly enjoying the benches. Freshman Jessica Munoz said, “I definitely do enjoy (the pews). It’s good because there’s not a lot of seating on this side (of the hall). … This is actually my first time using it, … but I do like it!”

Sophomore Lauryn Wandmacher said the benches are “comfortable” and “very convenient. … If you’re waiting for friends, you can wait on the benches.”

“I took a nap on (the pews), and they’re very comforting,” said freshman Lily McKeough.

Freshman Ben Hooper said with a laugh that that academic building has “become a church.”

Whether Egan Hall has “become a church” is subjective, but it is clear that students agree: The pews and outlets are an appreciated addition to academic life.