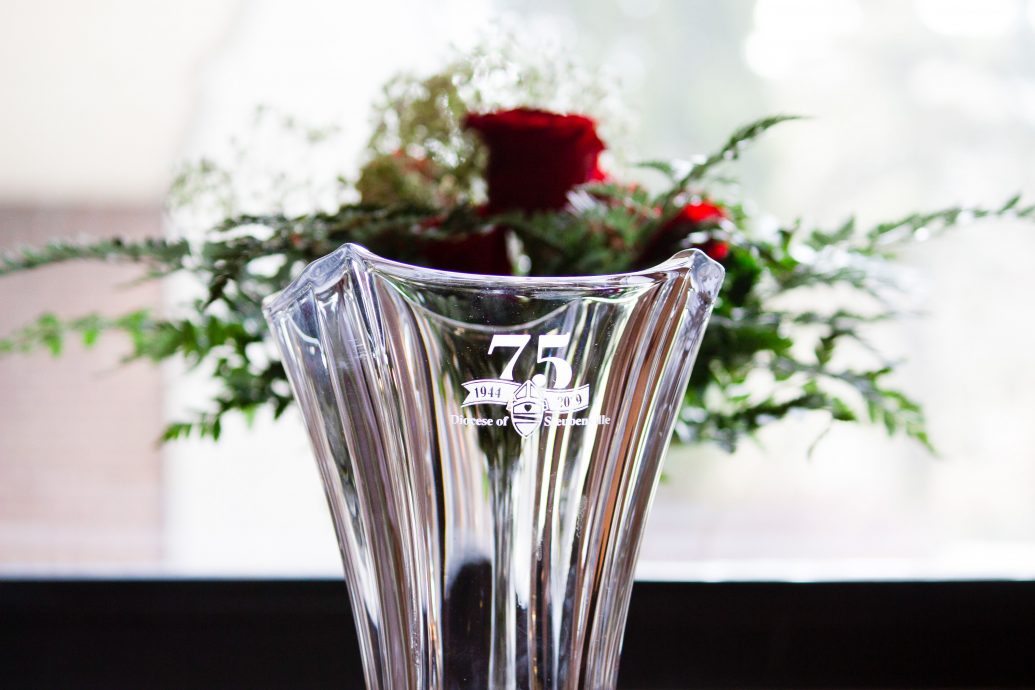 “Where in the Gospel does it say (that) Jesus speaks to his disciples and says, ‘Remember the most important thing is that you are happy, because remember everybody is going to heaven’? … nowhere.” This was the message provided by Bishop Jeffery Monforton as he gave the homily at the 10:30 a.m. Mass in Christ the King Chapel this past Sunday.

Bishop Monforton came to campus to celebrate the 75th anniversary of the Diocese of Steubenville, which was created in late 1944 from territory of the Diocese of Columbus. The first bishop of the diocese, John King Mussio, however, was not elevated to the episcopate until March of 1945. His fifth successor, Monforton, was installed in 2012.

Monforton was joined in celebrating Mass by the Rev. David Pivonka, TOR, Franciscan University of Steubenville president, as well as eight other friars stationed on campus. In a short ceremony following Mass, Pivonka presented Monforton with the original letter sent by Mussio to the Rev. John Boccella, TOR, provincial minister of the TOR Province of the Most Sacred Heat of Jesus, formally inviting the friars to open a college in the new diocese.

In the same ceremony, two students presented the bishop with a vase commemorating the occasion and a plaque proclaiming that the friars on campus would offer 75 masses this year for the intentions of the diocese.

Following Mass and the presentation ceremony, a small reception was held in the J.C. Williams Center Fireside Lounge.

“It was amazing to see all of the TOR priests celebrating the Holy Sacrifice alongside and in communion with the bishop,” said Grace Rybak, junior. “The cake was good too.”

The Mass was a part of the diocese’s year-long celebration of its anniversary. Further events will be announced on the website of the Steubenville diocese, www.diosteub.org. The website also features a comprehensive history of the diocese from founding until present day.