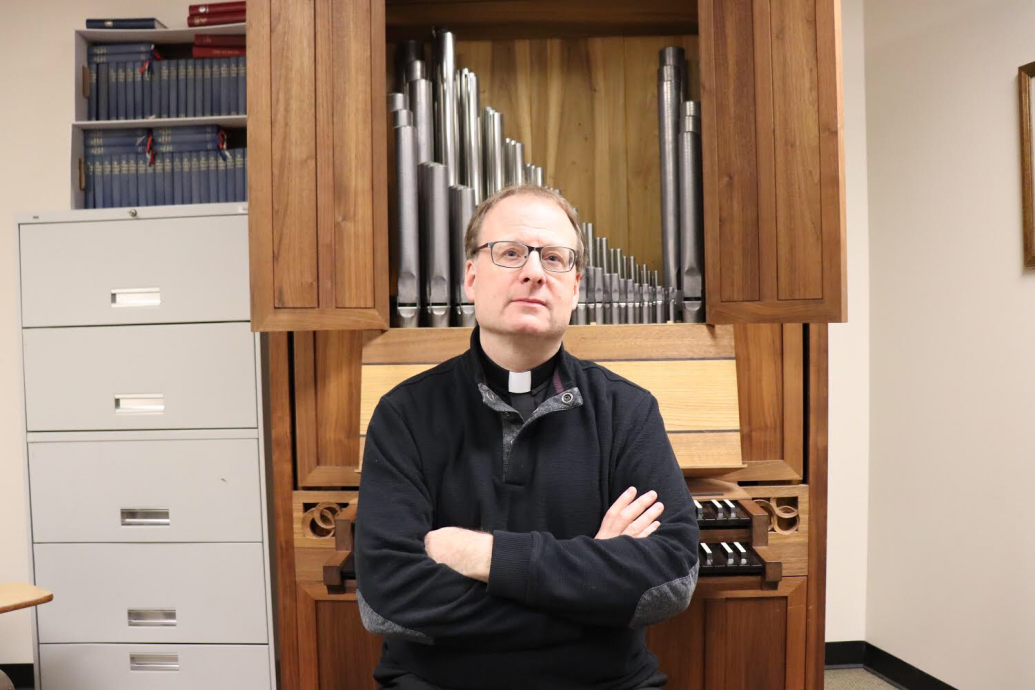 Franciscan University of Steubenville’s newest professor of sacred music believes each person plays a unique part in the story of creation.

“Being a Benedictine monk, we tend to take a comprehensive view on things, that everything has a place,” said the Rev. Stephen Concordia, OSB. “We all specialize in something, but there’s always an attention to see all of creation as blessed and good.”

Concordia, a Benedictine priest of St. Vincent Archabbey in Latrobe, Pennsylvania, plays his part as a member of the university’s sacred music program, filling the vacancy in August left by Professor Nicholas Will, on leave to become director of liturgical music at the Pontifical North American College in Rome.

Growing up in Massachusetts during the Second Vatican Council, Concordia was introduced to sacred music early in life. From the age of 7 until high school, he was a choir boy for St. Paul Cathedral of the Diocese of Worcester.

“We would sing for High Mass every Sunday, except during the summer,” Concordia said, “and for big solemnities like Easter and Christmas. We would sing at a different parish every week, all over the diocese.”

Concordia said that while most of the changes of Vatican II flew over his little boy’s head – “I was living in the new; it was all I’d experienced” – a vocation was sparked inside of him during Mass.

“The choir was moved closer to the sanctuary,” he said, “and I felt more drawn into the Mass than ever before. It was all right there in front of me, and I think that’s where I first felt a call to the priesthood.”

That vocation would be put on hold, however, as Concordia entered high school and college during the tumultuous 1970s. At a time when he was struggling to find a spiritual focus in his life, Concordia picked up the piano in high school and attended the New England Conservatory of Music in Boston, where he studied piano and music theory and finished with a master’s degree in 1983.

Concordia spent the next few years scraping by before becoming a teacher at a community music school in New Haven, Connecticut. It was about this time that he found himself interacting with the local Benedictine abbey, an experience that brought back the faith of his youth.

He became an oblate – a lay person who follows the Rule of St. Benedict in his or her everyday life – and gathered with the 30 other oblates once a month to work on the monastery land and learn more about the Benedictine life.

“Vatican II opened new possibilities for monasteries and religious communities and allowed a time of experimentation to see how we could get … back to the spirit of St. Benedict and how to live an ancient spirituality in the modern world,” he said. “I found that the Benedictine life was going to give me a deeper orientation for who I was and what I wanted to do.”

Concordia felt a call to enter the order more fully, but his spiritual director told him he wasn’t ready yet. After five years as an oblate and seeing two of his fellow oblates join Benedictine communities in Italy, Concordia finally got the green light, entering the Italian Abbey of Montecassino in 1989 as a postulant.

Sent by his community to study in Rome, Concordia rekindled his love for sacred music and earned licentiates in organ and Gregorian chant from the Pontifical Institute of Sacred Music. He had observed how Vatican II’s teachings on sacred music had been ignored and saw his studies as having a new purpose of bringing back the beauty of music in the liturgy.

“The parish music when I was in college really pushed me away from the Church,” he said. “When I came to the Benedictines, they were singing chant every day, and that’s where I got locked into something I knew I wanted to do.”

Ordained a priest in 1995, Concordia spent 12 years in Italy and founded a boys’ choir as part of his ministry. But as his parents were getting older, Concordia asked to have his vows transferred to the United States and arrived at St. Vincent’s in 2008, where he has been since.

He taught music at the abbey’s St. Vincent College, leading the St. Vincent Camerata choir, and met Will through their work with their respective school choirs. When he heard that Will would be taking a leave of absence from Franciscan, Concordia offered to take his spot and began teaching at Franciscan in the fall 2018 semester.

“I think the sacred music program here is wonderful,” Concordia said. “It’s exactly the kind of program that Vatican II asked of Catholic institutions of higher learning. The Church has this devotion of sacred music and it’s our responsibility to own it and care for it. That’s what I see this program doing.”

Concordia has also stepped in to lead the university’s liturgical choir, the Schola Cantorum Franciscana, and hopes to increase its presence on campus.

“There’s a lot of new music that could work in the liturgy to capture something of the past and something of the present,” Concordia said. “I’ve spoken to a few members of the Schola about the possibility of singing at a weekly Sunday Mass, and that’s something that I would like to pursue.”

Not knowing how long until Will’s leave concludes, Concordia is looking forward to his time at Franciscan and teaching here for however long he remains.

“I feel really blessed to be here,” he said, “and I hope I can help this program into the future.”