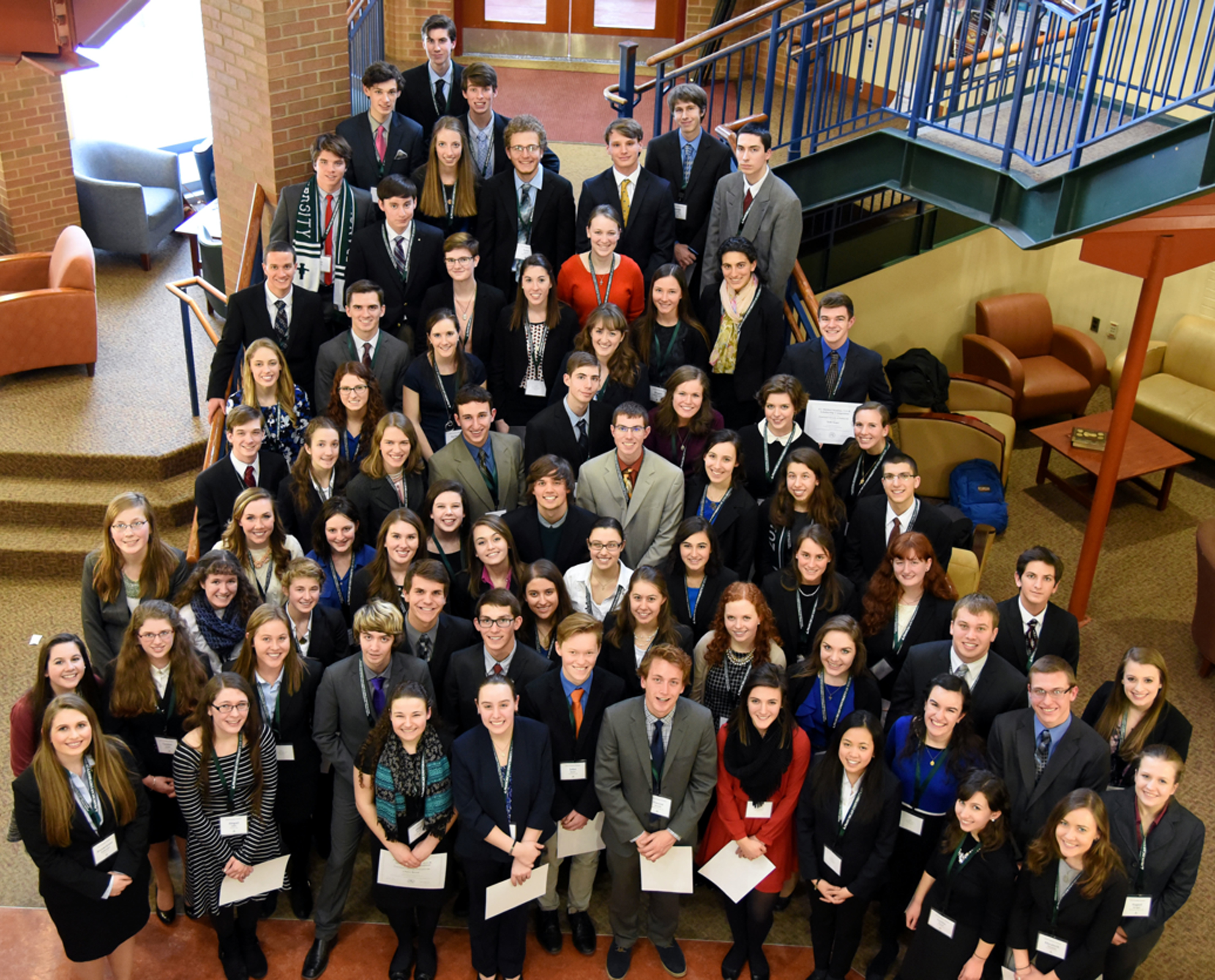 High school seniors from across the country flocked to Franciscan University of Steubenville on Feb. 11-12 for the chance to compete for one of two full-tuition scholarships.

Named for the Rev. Michael Scanlan, TOR, president emeritus of the university, the Father Michael Scanlan Scholarship Competition is in its 13th year of existence. Scanlan served as president of Franciscan for 26 years and was instrumental in bringing the campus back to its Catholic faith

“The whole purpose (of the competition) is to just keep Fr. Michael Scanlan a presence on this campus,” said Carolyn Conlon, president of the Father Michael Scanlan Scholarship Society. “I just think that he is at the heart of the competition, and he’s at the heart of all the people who participate and all the people in the past. His legacy has affected us all and the school in general.”

According to the Franciscan University website, to participate in the competition, high school seniors must have been admitted to the university no later than Jan. 15, 2016, and must have received an invitation to compete. Invitations are issued purely on academic merit as prospective students must score a minimum of 1360 on the SAT or 31 on the ACT to compete, stated the website.

To make the competition a little more challenging, however, pre-competition components were added this year. Those who were invited to compete had to submit a portfolio with a résumé and cover letter; make a 2-3 minute video introducing themselves; and submit a timed essay ̶ all before the competition even started.

“This year was actually the biggest change,” said Conlon. “More people than ever qualified to be in the competition this year and that kind of narrowed the process down a little bit. It took off a lot of pressure from them here, having the essay out of the way.”

Competitors arrived in Steubenville on Thursday, Feb. 11 for check-in, a welcoming social and evening prayer hosted by the Father Michael Scanlan Scholarship Society. All past competitors who chose to attend the university automatically become members of the society and help out with the competition every year.

“I think it’s important for the past scholars to help out because it is an opportunity to welcome future possible students and help them feel at home at Franciscan and be excited about Franciscan University,” said Alana Schoenle, a sophomore accounting major and member of the Scanlan Scholars Society.

William Blackley, a sophomore history and philosophy double major, said that he remembers his competition vividly as he met an Army ROTC member, who made quite an impact on him, at the welcoming social.

“He introduced himself, told me about the program, because that was something I was looking into,” said Blackley. “It gave me further information on something I wanted to do. I looked into it and I ended up coming here because of that. I’m in the Army ROTC program now, thanks to him.”

Reactions to the competition have been positive so far.

“I’ve been to a lot of college interviews at different universities and this one was … such a different experience, something that I’ve never experienced outside of a retreat before,” said Bailey Lanier, a prospective student from Mandeville, Louisiana.

Conlon agreed, saying, “The Scanlan Scholars that participated this year are very social. They seem really relaxed. They seem like they’re having tons of fun and that they all bonded a lot. It’s just really good to see.”

Two full-tuition scholarships, equivalent to $21,740 a year for four years will be awarded to the winners who will be announced in a couple of weeks.