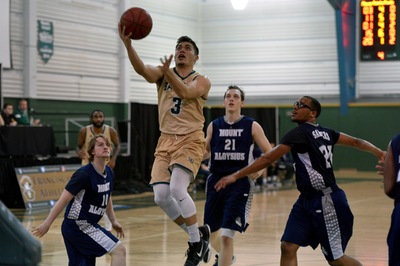 Despite leading for the majority of the second half, the Franciscan University men’s basketball team lost a close game to Mount Aloysius College on Wednesday, 63-61.

After overcoming a five-point deficit early in the first half, the Barons quickly established a lead, thanks to back-to-back 3-point shots from freshman guard Michael Mendicino, and a pair of free throws from guard Aaron Foldi.

Behind excellent ball handling from senior guard Derrick David and the consistent baseline presence of junior Garrison Holmes, the Barons displayed an on-court chemistry which gave the packed Finnegan Fieldhouse stands every reason to anticipate a second win on the season.

Freshman forward Josh York connected on two free throws with just 38 seconds left before the end of the half, to give the men a five-point lead at halftime.

When play resumed at the beginning of the second half, the Barons came out hot: a lay-up from sophomore forward Juwan Perkins and a long three-point shot from freshman forward Joe Schriner gave Franciscan back their 10-point lead. Point guard David would then score, to put the Barons ahead by 12, in what would be their largest lead of the game.

Inconsistent offensive efforts and an improved defensive effort on the part of Mount Aloysius College would eat away at the Barons’ lead; the Mounties began to take better advantage of matchup advantages against Franciscan’s man defense.

With just under 10 minutes to play, the Barons would watch their lead shrink to three points, before improved ball movement led to successive layups by David and York, and a pair of made free throws by junior guard Keoni Sablan. Sablan led all Barons with 13 points in 35 minutes played.

With 5:47 left to play, another York layup would even the score at 52 after Franciscan fully surrendered their lead. After a five-point run by the Mounties, Keoni Sablan would hit two clutch free throws to bring the Barons to within three points. Freshman center Matt Trent would connect on a midrange jump shot to lessen the deficit to a single point.

A loose-ball foul would give the Mounties two easy free throws with just four seconds remaining. Time would expire after Trent connected on a layup opportunity, giving Franciscan University a loss by their slimmest margin of the year, a loss not representative of the effort and on-court growth displayed in all phases of the game.

Despite the loss, head coach Joe Wallace noted the positives.

“We have taken a lot of punches this year,” Wallace said in an interview with the school’s athletic department.

“We keep taking punches and we learn from them and continue to take steps forward as a team. Tonight’s loss definitely hurts but we are going to get up from this and get better,” said Wallace.

The Barons return to Finnegan Fieldhouse on Wednesday, February 8 to host University of Pitt.-Greensburg. Tip-off is at 8:00 p.m.

2017-02-04
Previous Post: Lady Barons fall to Mount Aloysius College, despite improvements to the team
Next Post: News Briefs-National and International