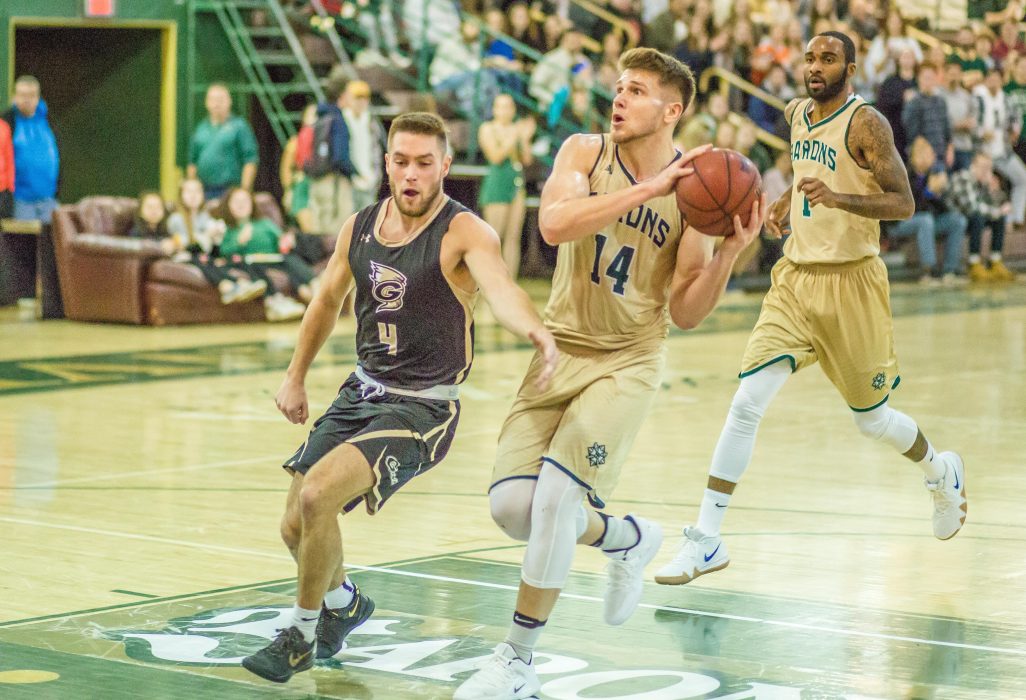 The Franciscan University of Steubenville men’s basketball team left the crowds spilling over the stands with excitement from their victory against Geneva College, 69-66, at Monday night’s game at 7 p.m. on Nov. 26.

The Barons started off strong with junior forward Josh York winning the tip, but Geneva picked up the rebound and scored the first point. The Barons soon came back with layups from junior forward Joe Schriner and junior center Matt Trent and a shot from sophomore guard Sean Hickey, giving them the lead by five points.

Even with the lead, Geneva came back fighting, tying with the Barons 10-10 with 11:20 left on the clock. The Baron defense grew sluggish for a stretch as they wrestled to take the lead and ended up giving Geneva three foul shots, ending the first half 32-26 Geneva.

After warming up for the second half, the Barons came back with fire as Hickey scored a three-pointer followed by Trent’s two points which brought the score close, 32-31 Geneva. With 17:25 left to play, the energy in the crowd and the team rose as the Barons again tied, 34-34.

Wrestling to take the lead, the Barons finally made a breakthrough with Trent, scoring two points, but Geneva tied the score again through a foul shot. After a quick time out, the Barons broke the tie with a mid-range step back jumper from junior guard John Noce, heightening the energy and excitement in the stands and the team.

With 5:02 left, the Barons seemed to solidify the lead with two shots from senior forward Juwan Perkins bringing the score to 56-52 Barons, but Geneva quickly caught up, tying the score again and sending the crowd roaring. At this point, everyone in the student section was standing on his or her seat cheering on for the beloved Barons.

Determined to stay out of the tie once and for all, the Barons pulled ahead with four points and four foul shots from Noce, York, Hickey and Perkins, reaching a score of 66-63 in the Barons’ favor. Geneva, determined to steal back the lead, shot a three-pointer with 0.7 seconds on the clock bringing a close score of 67-66.

Adding 1.1 seconds to the clock, the game continued to the Barons’ advantage. Not wanting to waste any more time, junior forward Christian Comenge made an impressive throw halfway across the court to Trent, who tipped the ball to Perkins, scoring the final point with a layup right at the buzzer, finishing the game 69-66. The crowd went wild at the incredible victory.

While head coach Joe Wallace was frustrated with how the first half was played, he was pleased with the win and more importantly with the atmosphere from the crowd. “The atmosphere in this place was awesome, having all the students out and supportive and loud. It made it fun,” said Wallace. “We really appreciate any support like that.”

The Barons’ next home game will be at 8 p.m. on Wednesday, Nov. 28, against Pitt-Greensburg.

2018-12-01
Previous Post: Speaker calls for students to be passionate in business
Next Post: Law professor illuminates mistakes of Supreme Court on abortion, substantive due process