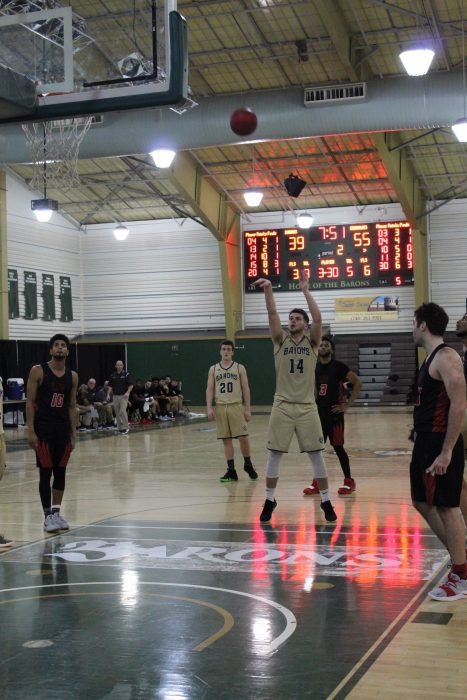 The Barons suffered a crushing defeat as they battled against the La Roche College Redhawks, 66-51, on Wednesday, Feb. 6, at 8 p.m.

After losing the tip, the Barons started off strong as junior center Matt Trent scored the first two points of the game. Redhawks soon fought back with two points of their own and the game picked up with both teams racing back and forth across the court.

After wrestling for the lead, Trent scored another 2-pointer, bringing the game to a tie, 10-10, with 13:48 left to play. Freshman forward Travis Lien pulled the Barons up with two more points after a tough rebound putback in the paint. The Redhawks came back fast as they pulled ahead, scoring a 3-pointer followed by four more points.

With 10:28 left to play, the Barons struggled to match the Redhawks by adding four more points but gave up two points and two free throws, bringing the score to 23-16 Redhawks. The Barons soon drew closer with shots from Trent and junior guard John Noce until the Redhawks scored two more free throws and a 3-pointer. Freshman guard Justin Mack made an exhilarating 3-point shot at the buzzer ending the first half trailing at 38-27.

Within the first four minutes of the second half, the Redhawks upped their score to 45-29. Frustrated with the battle on the court, Noce made a hard drive to the basket and finished his layup through the teeth of the defense, scoring two points for the Barons. Even with the home team’s determination, the Redhawks pulled even further ahead with seven points of their own.

After a timeout at 11:04, the Barons plowed down the court with new determination scoring point after point and upping the score to 55-39. The Barons continued their scoring streak, bringing the score to a 12-point difference, 59-47.

After another timeout at 2:23, the Barons’ fire quickly fizzled after giving up two free throws and a 2-pointer. Not wanting to completely give up just yet, Mack stole the ball and went for a layup, scoring two points. The Redhawks stayed ahead with a foul shot, bringing the score to 64-49.

The Redhawks made their final points with two free throws before calling a timeout. With 13.3 seconds left on the clock, senior forward Juwan Perkins pushed for a layup, scoring two points for the Barons before letting the clock run out. The game ended with an upsetting 66-51, giving the Redhawks the win.

Even with the solid deficit, Head Coach Joe Wallace remained optimistic. “I thought we competed. I thought we brought a lot of toughness. We just didn’t play well and that’s just what it’s going to take for us the rest of the year,” he said. “We have to play well regardless of who we play. It’s the little things that add up.”

The Barons’ next home game is at 4 p.m. on Saturday, Feb. 9, senior night, against the Hilbert College Hawks.