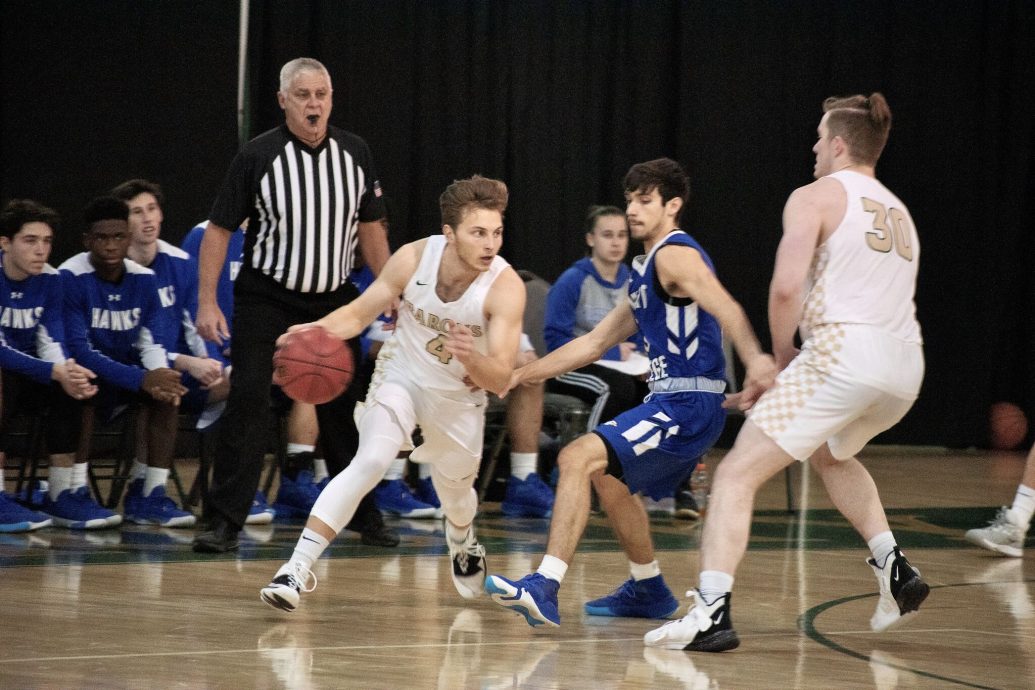 The Barons started off strong, with senior center Matt Trent winning the tip and passing it to junior guard Sean Hickey. They eventually lost it to the Hawks, giving them their first two points. The Hawks kept up the pace with a couple of two-pointers and layups, bringing them up, 15-0, with 13:02 left to play.

The Barons finally scored their first two points with a foul shot from senior forward Joe Schriner. Wrestling on the ground for the ball, the Hawks eventually got the upper hand, scoring with a few more two-pointers, but Hickey helped the Barons out with a three-pointer.

The Hawks picked up their game with a two-pointer, three-pointer and layup all within a minute, bringing the score to 26-7. Determined to take the lead, the Barons battled on the court, with two-pointers from senior forward Christian Comenge and Hickey, followed by senior guard John Noce with a layup and foul shot. Schriner came back with a layup after catching a rebound and scored another two points.

Sophomore guard Justin Mack brought the game closer with a three-pointer, making the score 26-21, Hawks. The Barons scored a foul shot from Schriner in the last 30 seconds of the first half, but the Hawks were still ahead by halftime, 32-24.

After halftime, the Hawks did not slow down as they scored six points in the first three minutes. After a time-out and a foul shot from the Hawks, the Barons stepped up their game as junior forward Joe Vernau shot a layup with an assist from Trent, followed by layups from Hickey, Trent and freshman guard Gabriel Roach.

The game got intense in the last three minutes, with the Barons determined to go home with a win. Noce and Mack carried the points with layups and a three-pointer. With 38.8 seconds left, Trent scored a layup, followed by Mack with a three-pointer, bringing the score to 70-67. Noce cashed in on a foul shot and intentionally missed the second to try to give the Barons life, but the attempt to get a rebound was not successful, ending the game with a close score of 70-68, Hawks.

Head coach Joe Wallace expressed his pride in his team, saying, “To start the game down 21-2 is a heck of a hole to start out in. We didn’t give up and were able to claw back in the game. I was proud of our resolve as a team and fight.”

The Baron basketball team’s next home game will be against Medaille College Jan. 8 at 6 p.m.