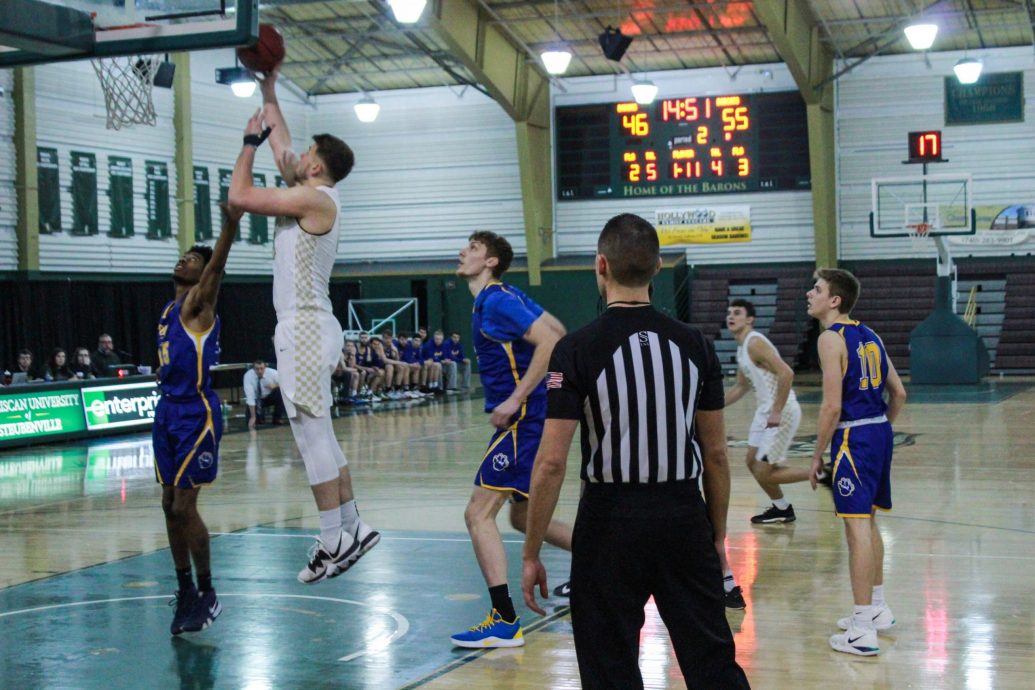 The Franciscan University of Steubenville men’s basketball team played a close game against the Pittsburgh Greensburg Bobcats on Wednesday at 6 p.m., keeping the game competitive and undecided until the last two seconds.

The game started with the Barons taking the ball, and within the first minute they were the first to score, setting a tone of competition for the match.

At 17 minutes, Pitt shot a 3–pointer, but the Barons followed up with sophomore forward Travis Lien shooting a 3-pointer at 15 minutes, and seconds later junior guard Sean Hickey shot his own 3-pointer.

Matt Trent stole the ball three minutes later and shot from underneath the hoop, after which Lien made yet another 3–pointer, putting the Barons in the lead at 17-16.

At 12.5 minutes junior center Joe Vernau stole the ball and passed it to Lien, who took it down the court for a layup. Vernau and Lien performed the exact same feat again seconds later, bringing the score to 21-18, Barons.

Hickey dodged Pitt to shoot a 3-pointer at seven minutes and then shot another 3-pointer soon after thanks to an assist from Trent, tying the score at 34-34.

The first period ended with each team determined to not let the other get ahead, and the score stayed tied up at 42-42.

The halftime show featured a baton twirler who used a basketball in her routine.

Pitt dunked the ball the first few seconds of the second period, but the Barons came right back with a basket by Trent.

The teams traded baskets until Pitt made a 3-pointer coming out of a timeout called by the Barons, who followed it up with their own shot, causing the game to heat up as the teams battled to stay neck and neck. At two minutes, Pitt called a full timeout, leading by one point at 76-75.

The Barons then scored with 30 seconds left on the clock and also called a full timeout, only behind by one point at 80-79, Pitt.

At 16 seconds Pitt called a full timeout, and the team then scored at eight seconds. With the Barons at 79 and Pitt at 82, the Barons called a 30–second timeout.

With pressure amping at 1.9 seconds left in the game, the Barons fouled and Pitt shot two free throws. The clock went out and the Barons lost 84-79 after a dizzying match.

The Barons look forward to taking on Pitt again at their next home game on Saturday, Jan. 25, at 2 p.m.

2020-01-25
Previous Post: March for Life: Behind the scenes with the student leaders
Next Post: Lady Barons put up intense fight, fall to Bobcats