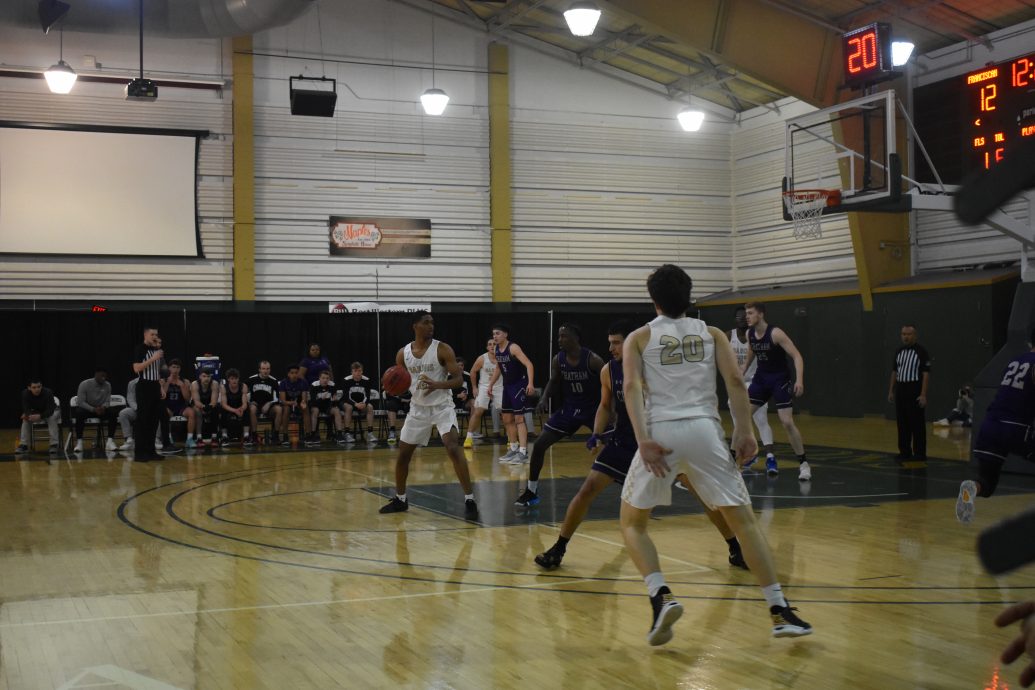 The Franciscan men’s basketball team defeated the Chatham University Cougars 87-83 at a home game on senior day Saturday at 4 p.m.

In the first half, the Barons had a strong half-court defense. Graduate student guard Sean Hickey scored 18 points in the first half. Junior guard Colton Hage switched off between playing a successful defense and going up for shooting.

The Barons’ rebounding and shooting put them ahead of Chatham at the end of the first half. The score at halftime was 41-38 with the Barons in the lead.

During the second half, the combined efforts of senior forward Travis Lien, freshman forward Yann Yonkeu and sophomore forward Nicholas Allienello worked to block out a key Chatham player.

The game was tied at two minutes left in the second half. After a foul on his layup attempt, Hickey sank his next two free throws.

Then sophomore guard Josh Zimmerman got an offensive rebound. Senior forward Travis Lien converted the rebound to a close-range jumper.

After that, Zimmerman took a steal and was fouled. He scored on both of his free throws. The Barons were now four points ahead of Chatham.

The Barons held off Chatham in the final seconds and won the game 87-83.

Several players had notable results from the game. Hickey scored a total of 32 points. He is only eight points away from reaching the third all-time scoring record.

Zimmerman had 10 rebounds, leading the Barons in number of rebounds for the game. The Barons also out-rebounded the Chatham Cougars 44-34.

The Baron pep band performed during the game.

The Barons next game will be a home game Monday at 7 p.m. against Bethany College. This game will be the first-round game for the Presidential Athletic Conference Championship Tournament.