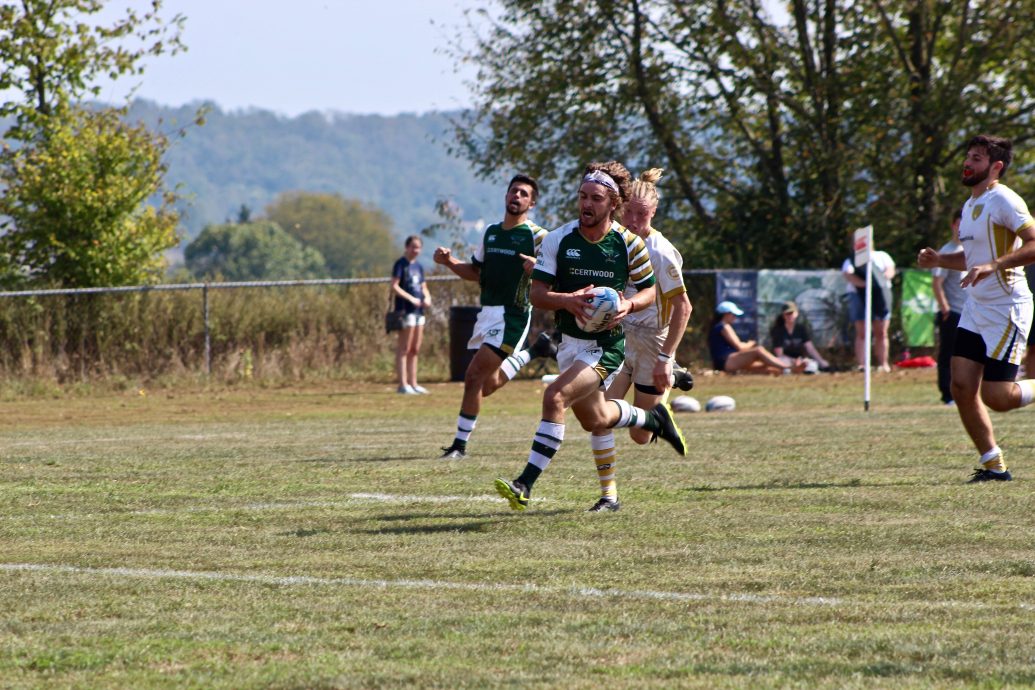 It was a hot day, but students and families flocked to the Memorial Field to cheer on the Franciscan University of Steubenville rugby team. The game consisted of good ball movement, and the Barons took advantage of every opportunity to score.

Franciscan began by scoring the first try of the game. Soon after, senior forward Zach Barnes and senior 8 man David Prezzia both scored their own respective tries.

In an exciting play, sophomore prop Luke Hall made an assist to Prezzia, and after he made the kick, the halftime score came to 22-0.

The Barons’ sharp defense and opportunistic offense resulted in a huge lead heading into the second half. The home team ruggers looked to carry this mindset into the rest of the match.

Franciscan continued to play well, and midway through the half, the Barons scored another try and made the conversion, bringing the score to 29-0.

With 25 minutes left in the half, Geneva scored. The Geneva player dropped the ball but caught it again, an unfortunate bounce for the Barons, but Franciscan scored again soon after, with Hall assisting junior scrumhalf Anthony Hobbs.

The Barons continued to rack up points as junior lock Gabe Iacoviello assisted junior wing Cader Coleman in scoring a try, making the score 44-5. The game ended due to the mercy rule with 15 minutes left on the clock.

“The game went really well,” said head coach Jason Adams. “We left a lot of points on the field. I’m not saying we want to run up the score — that’s not what we want to do. But at the same time, the players need to know that those points, especially with playoffs coming on, that those can come back to haunt us. But we were able to put a lot of pressure on them, and the ball handling was fantastic.”

The Franciscan ruggers will next play on their home pitch against University of Pittsburgh at Johnstown, Sep. 28 at 1 p.m.

2019-09-24
Previous Post: Explorers of the Past club travels through the ages in a single afternoon
Next Post: Latin Mass fills Christ the King Chapel with record-breaking crowd