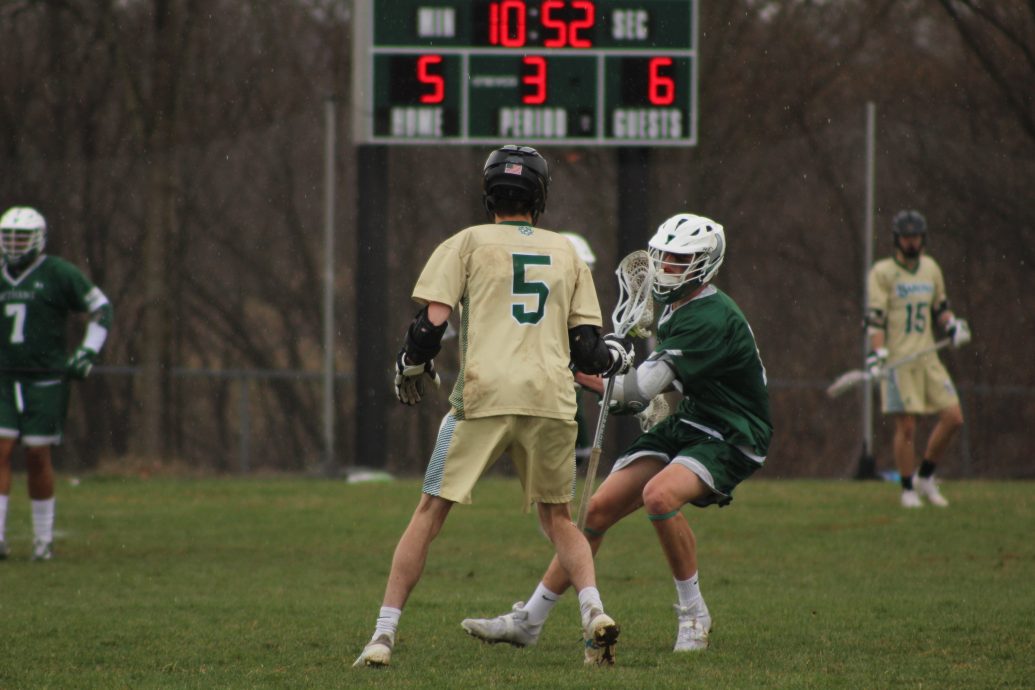 Franciscan University of Steubenville’s men’s lacrosse team lost in a close game, 11-9, against Bethany College at 1 p.m. on Saturday, March 30.

“Sandstorm” by Darude blasted from loud speakers, hyping up players while students waited in line for Chick-fil-A in celebration of the team’s first game in the Presidents’ Athletic Conference.

Now 2-1 Franciscan, the Barons held off the Bison for the remainder of the quarter until they scored their second goal with 4:07 left to play. The game got rough as players slammed into each other. The Barons fought hard only to give up three more goals, ending the first quarter 5-2 Bison.

Within the first three minutes of the second quarter, the Bison scored again, but the home team stepped up its game with a goal from junior attacker Michael Araps with 10:44 left to play, to the screams of the crowd. After a timeout, the Barons continued their strong offense, attempting several shots until sophomore defenseman Nicholas Brierley scored one with five minutes left to play. The Barons finished the quarter with another goal, narrowing the gap to 6-5 Bison.

After halftime, the Barons struggled to get the ball off the ground but eventually came through with junior midfielder Joe Bartholomaus scoring a goal to tie the game. The victory was short-lived. The Bison scored two goals at 8:14 and 6:31. Barons fought hard on defense, blocking two shots, but the Bison broke through and scored a goal. The Barons attempted their own shots until McCartney scored a goal with 26 seconds to spare. The quarter ended 9-7 with the Bison still in the lead.

Within the first two minutes of the final quarter, the Bison scored a goal, upping the score to 10-7. The Barons fought back with a goal of their own. The fast-paced game slowed down a bit until the Bison scored a goal with 3:09 to play. The Barons trudged across the field to score their final goal of the game with 6.7 seconds left on the clock, ending the game 11-9, a Bison win.

Head coach Pete Rosaschi appreciated the team’s performance in this first PAC game. “Very proud of our guys for coming out and playing with such zeal and energy,” said Rosaschi. “We’re excited to step up in competition to the PAC Conference.”

The Barons are back on Memorial Field to take on Thiel College on Wednesday, April 3, at 4 p.m.