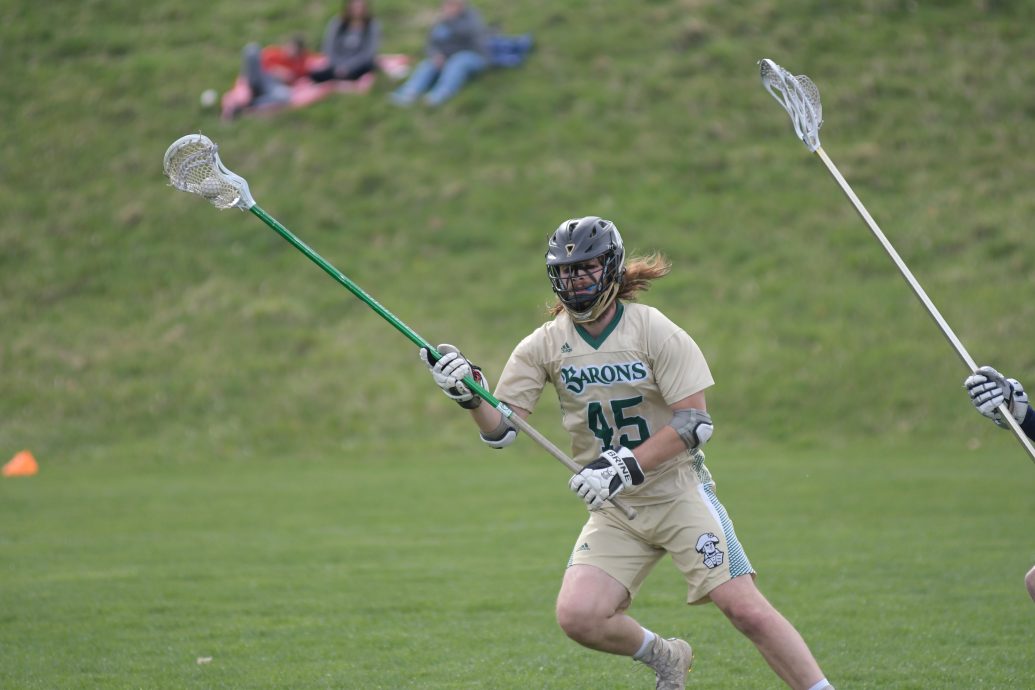 At the top of the first quarter, the Barons wrestled with the Tomcats and gave up two goals within the first four minutes. Both teams struggled to control the ball, which seemed to stick to the field. The game then got more aggressive as both teams caught traction. The Barons fought hard on offense, pushing through fierce blows from the other team. However, in the last seven minutes, the Tomcats scored six back-to-back goals, ending the quarter 9-0.

The second quarter began, and the Tomcats took several shots on goal, but the Barons played strong defense and blocked them. Junior midfielder Jon Lee scored the Barons’ first point of the game with 12:49 left to play in the half. The Tomcats came back shortly with three goals of their own within three minutes, bringing the score to 12-1. Struggling to control the ball, the Barons gave up three more goals before finally coming back with another goal by Lee. The quarter ended 15-2.

In the beginning of the second half, the Barons suffered on defense as the Tomcats scored two more goals at 14:28 and 12:29. Seven seconds later, Lee fired back with his third goal. The Barons’ defense stayed strong until 6:42, when the Tomcats broke through and scored a goal, bringing the score to 18-3. Within the last three minutes of the quarter, Lee scored another goal that was immediately followed by a goal from the visiting team, ending the quarter 19-4.

Not wanting to give up, the Barons fought hard on defense and attempted several shots on net. The Baron defense remained strong until 8:02, when they gave up their final goal. Wanting to redeem the Barons, senior midfielder Dan McCartney scored the final point for the Barons, ultimately ending the game 20-5 with a win for Thiel.

Head coach Pete Rosaschi still holds hope for the team and its season. “Our guys just stepped it up. We got to come out on fire a little more,” said Rosaschi. “I’m proud of the guys, (that they) keep fighting.”

The Barons will face Grove City on Memorial Field Saturday, April 27, at 2 p.m.