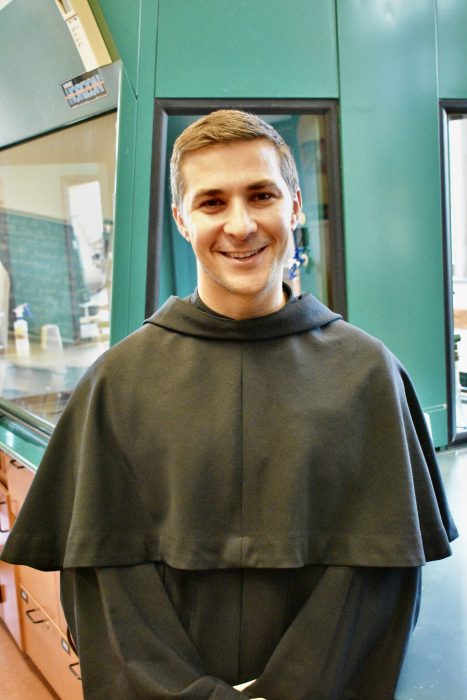 Passions for Franciscan spirituality, soccer and chemistry are some of the superpowers which Brother Joseph Marie Krilich, TOR, has brought with him as a returning member of the Franciscan University of Steubenville family.

Krilich, a 2013 graduate of Franciscan, arrived at the university this fall semester ready to fulfill a number of different positions in the campus life, not only in a spiritual capacity but also in the athletic and academic fields.

Excited to be at Franciscan once again, Krilich is anticipating the opportunity to watch and participate in campus life as the academic year unfolds. Being able to build relationships with the students through his various roles is what makes Krilich’s position special for him.

“I can share the faith in different ways in all of my ministries, which I think is really neat,” he said.

One of the ways he relates to the faith journey of plenty of students across campus is that Krilich claims St. Therese of Lisieux as a favorite patron and role model. “I’ve always been the stereotypical St. Therese fan,” he said. “She just embodies a lot of relatable aspects, especially in prayer.”

On some days, Krilich can be found in the office in Sts. Louis and Elizabeth hall where he is one of the dorm chaplains. Here, he enjoys communicating with the students on a personal level, hanging out and enjoying their company.

“I am really enjoying building those relationships,” he said, “(and) being able to grow with the students. I push them, but they also push me — usually implicitly.”

On other days, Krilich, a life-long soccer enthusiast, can be found out on the soccer field, cheering on the Barons as the chaplain for both the men’s and women’s soccer teams. During his four years at Franciscan as a student, he played on the men’s soccer team, but his time on the field didn’t stop there. “I get out there and play with them when I can,” he said.

In a more academic role, Krilich, who was a chemistry major, received the opportunity to work in the chemistry department, where he teaches labs and assists with the organic chemistry lectures. He is interested in going onto graduate school after ordination so that he can teach biochemistry.

“I’m looking into further studies so that I can teach in the future,” he said. He expects to undertake a few years of ordained ministry for some time, however, before returning to school.

When he is not busy with his many responsibilities around campus, Krilich enjoys doing physical activities. “I love exercising,” he said. “Cycling, lifting, playing sports — those are my biggest hobbies, outside of reading and hanging out with friars and friends.”

Originally from St. John, Indiana, Krilich grew up with seven sisters, six older and one younger than himself. “People will ask me how I survived with all of those sisters,” Krilich said. “I tell them I didn’t know any better, that’s what I grew up with.”

Krilich is not the only graduate from Franciscan in his family — all seven of his sisters also attended the university. “I didn’t exactly choose to come to Franciscan at that time,” Krilich said. “But I learned to love it, and I was happy that my parents helped me come here initially.”

During his time at Franciscan, Krilich was a member of the Disciples of the Word household, which he joined in his junior year.

After graduation, Krilich spent a year teaching underprivileged children in Belize while actively discerning his vocation. He considered going on to medical school but also felt a call to religious life. “Before I made this huge life decision,” he explained, “I just wanted to go serve for a year.”

Then, in 2014, he joined the Franciscan Third Order Regulars.

Krilich has now completed his two years of formation in the TOR order as well as three years of seminary. This year at Franciscan is his period of ministry, or apostolic year, before undertaking his final year of seminary at the Catholic University of America.

Krilich is happy that he was sent to his alma mater, which he says is a very special place to do ministry.

“There are a lot of young people here on fire for their faith,” he said, “just longing to grow deeper in it. It is cool that I have the ability to be in the science lab, on the soccer fields and in a formal spiritual setting and integrate the faith into so many aspects.”