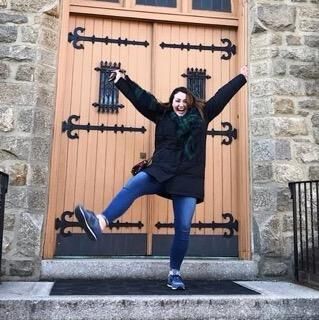 Hammel’s tennis journey started at a young age due to her brothers’ interest in the sport. The self-described tomboy began her tennis career in middle school to follow in her brothers’ footsteps.

After all these years of honing her tennis skills, Hammel plays an aggressive baseline style with the intention of being relentless and hitting tough shots down the sides of the court and rarely stepping to the net.

As a senior, Hammel has had a career full of good times and many wins, but one particular doubles memory with fellow senior Madelyn Conrad especially stood out.

“We were playing Penn State-Behrend at home,” Hammel said, “and the upperclassmen on the team were excited about this particular match because Behrend was our toughest competition in conference and we had lost to them the previous few years. … I’ll never forget the combination of nerves, excitement and our will not only to prove that we could do it to our team but ourselves as well.”

Hammel and Conrad won the set 8-7 in a close tiebreak 7-5. “It felt like we had just won a five-set championship match at Arthur Ashe Stadium with the way the crowd supported us. As a team, we won 5-4, a little too close for comfort but close enough that we learned how important every point and every game was,” said Hammel.

These lessons were integral as they would help the most winningest team on campus earn that pedigree. The Lady Barons tennis team is currently the reigning conference champion, and the ladies are looking to repeat and go above and beyond this year.

“Our team this year has the most potential of any team thus far,” said Hammel. “As a team, we talk a lot about why we play and who we play for, whether it be for a family member who has passed away, a friend who is struggling or just as a ‘why’ to better glorify Christ with our talents, so my goal for the team this year is to truly grow in deeper humility and relationship with Christ through matches that could be overwhelmingly difficult or frustratingly lack strong competition.”

Hammel’s own inspiration comes from her family members. Their humility and integrity keep her headed in the right direction, striving for greatness.

“They truly never give up on what is morally right and their responsibilities; so, I try to implement that kind of integrity and virtue into my own life however I can,” Hammel said. “Also, the saints inspire me, particularly St. Joan of Arc, in her authentic femininity and her courage in the face of opposition.”

Hammel and the tennis team will next take on University of Mount Union Tuesday, Sept. 17 at 3:30 p.m. at the Belleview tennis courts.