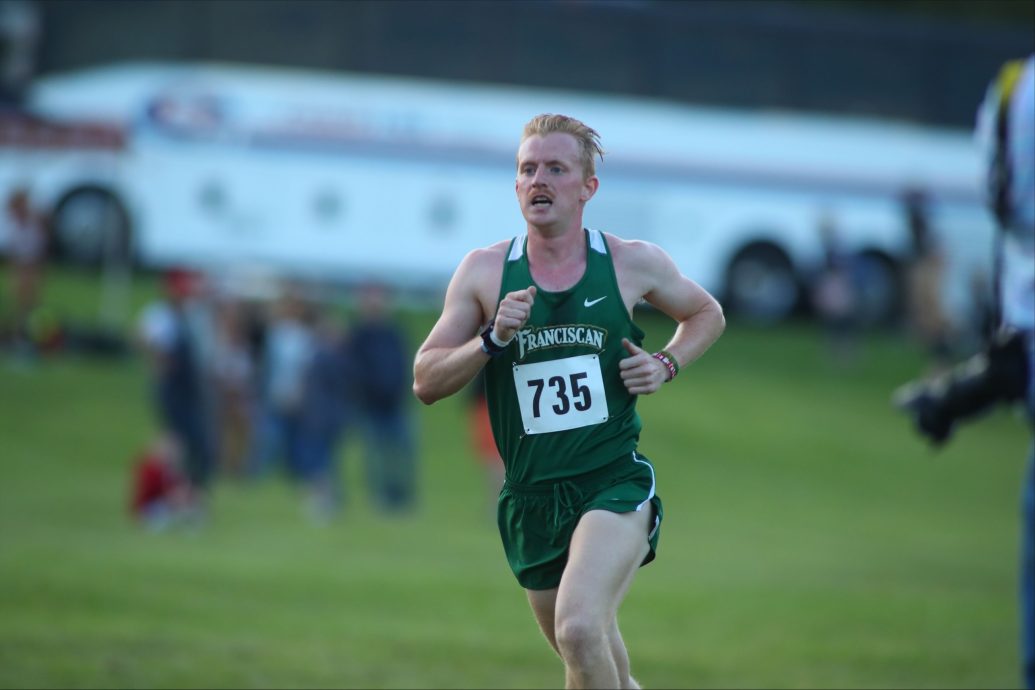 Never will there be a more suitable use for the “Chariots of Fire” theme than for when Liam Galligan, wavy-haired and mustached, breaks through the finish line tape at his cross country meets.

From Springfield, Pennsylvania, Galligan is a graduate student seeking a Master of Business Administration degree. Galligan is typically a mile-runner (1500 meters on the college level) on the Franciscan University of Steubenville track and field team; additionally, Galligan is on the cross country team, for which he must run eight kilometers.

This year marks Galligan’s fifth year both of being in college and of competing in National Collegiate Athletic Association sports. The NCAA protected Galligan and other graduated students’ competitive eligibility after the coronavirus pandemic canceled their 2020-2021 season.

Galligan said the current cross country team is “the best team in the (Presidents’ Athletic Conference). … There’s no team that can match what we have. We’re actually shooting to be the first NCAA team to qualify for the national championships at an at-large bid.”

This level of efficiency is built upon a bedrock of team community. Galligan said the track and field and cross country teams emphasize the mental, bodily and spiritual health of their members through an accountability plan. There are weekly meetings, known as guys’ nights, that seek to promote this flourishment.

“(The team members) support each other in every single way,” Galligan said. “Overall, everyone’s getting the same equal treatment, and we really care about each other.”

Galligan said running is a “very expressive way of showing Christ” in his life. This is accomplished through the day-to-day self-mastery required for running. This coordination extends to the rest of Galligan’s life, particularly in his allotment of time spent with Jesus in prayer.

During his college career, Galligan has been named the PAC Runner of the Year in 2021. He has also been dubbed Runner of the Week and Athlete of the Week on multiple occasions by various conferences and divisions, particularly the PAC.

Galligan was homeschooled, but the Catholic Youth Organization program through the Archdiocese of Philadelphia allowed him to compete against kids from other schools and parishes. He followed in the CYO footsteps of his older sisters Mary Galligan and alumna Grace Galligan (an All-American at Franciscan for cross country).

“My parents let me sign up (for the CYO) for one day,” Galligan said, “and I just had a blast my first day out of practice. So, that was what really attracted me to the sport, … having so much fun where I could just run around and have no one really monitor me.”

On a personal level, Galligan is inspired by his father, a chief financial officer of a real estate company.

Galligan said, “The way he models himself as a father for our family, working as hard as he can in his personal as well as professional life, really inspired me.”

Galligan himself is a go-getter, one who is passionate about administration and helping organizations live up to their fullest potentials. Galligan, who has practical experience in retail and sales, has made business more than simply his field of study.

“I’ve always been interested in how businesses work,” Galligan said, “and how they play a part in the larger, overall society. … Being a Christian, I wanted to bring a Christian aspect, especially a Catholic aspect, into the business world.”

Currently, Galligan works at a retail store selling running shoes — a truly fitting role for a business-minded runner. He helps customers, including runners and nursing students who must be on their feet regularly, to find the right size and type of shoe for their needs.

Galligan vocalizes the needs of student athletes through several important roles he has taken: president of Franciscan’s Student Athlete Advisory Committee, SAAC president of the PAC and NCAA representative of the PAC. “Make Franciscan Athletics Great,” a reference to former President Donald Trump, is Galligan’s motto for his athletic advisory work.

“(During) one of my first meetings, I was kind of blown away (not by) what SAAC was doing but what SAAC could be,” Galligan said. “This is my fourth year as the president. (I want to) really try to take my vision of what Franciscan athletics could be … and put that into action.”

As the season progresses, so shall the cross country and track and field teams progress in their development and ranking with Galligan at the helm.

Galligan said, “I can’t wait for people to see how much success the cross country, track and field programs have. … We’re the best team on campus.”