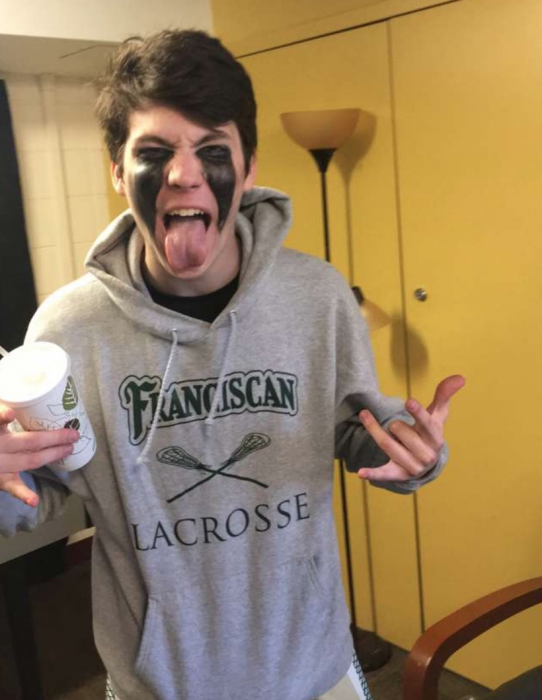 Jonathan Bookwalter is a freshman history major from Manassas, Virginia, who currently plays for the Franciscan men’s lacrosse team.

Bookwalter started playing lacrosse around middle school due to the influence of his brothers. “They all played so I thought I’d give it a try too. I’ve been around it for so long, so it was only natural,” he said. Jonathan has played attack most of his life, but here at Franciscan, he plays midfield.

Jonathan is more of a tame character outside of lacrosse, but don’t let that fool you. When asked to describe his style of play, Bookwalter spoke highly of his own aggressiveness. “I am as aggressive as an Aztec chieftain. I play to devour the strength of my enemies.” An interesting response that matches his intensity and attitude on the field.

When thinking back to his favorite sports memory, Bookwalter reminisced to his first goal. He talked about it like it had happened yesterday: “My teammate was on a fast break and drew the defender and passed it to me. I was so nervous, I just closed my eyes and let muscle memory take over and shot as hard as I could. I didn’t see the shot, but everyone said it stung top right. I was so happy.”

Bookwalter’s inspiration comes from his family. His brothers guided him through his early lacrosse career and he’s thankful that they pushed him to be the player and the man he is today. “My brothers helped me understand that lacrosse is not just a sport, it’s how I connect to my brothers. It’s how I understand family. You play for the guy next to you and bring them up when they fail, celebrate them when they succeed.”

Catch Jonathan Bookwalter and the lacrosse-playing Barons this Wednesday as they take on Thiel College at 4 p.m. at Memorial Field.

2019-04-10
Previous Post: Student-run publications dig into truth, challenge norms
Next Post: Sherri Kurz: living out a successful career with a family is possible